16 trucks used biofuels to haul between the final three European races this year. 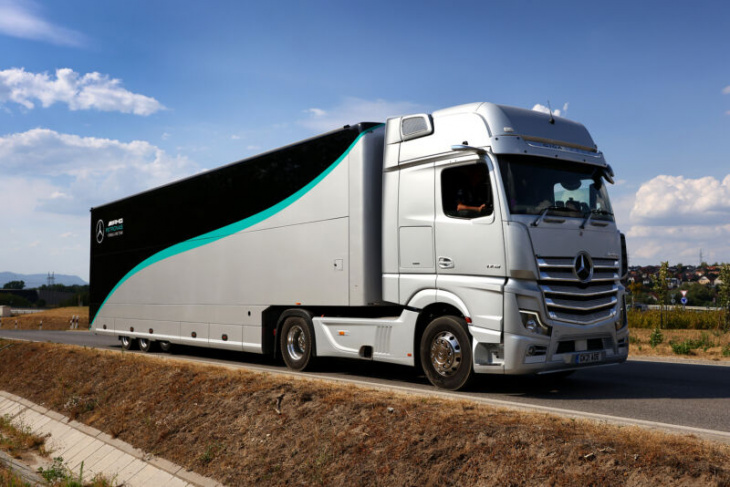 / One of the Mercedes-AMG Petronas Formula 1 team’s Actros Gigaspace trucks, seen here at this year’s Hungarian Grand Prix, when it first tried the drop-in renewable biofuel instead of conventional diesel.Steve Etherington/Mercedes-AMG F1

A switch from diesel to biofuel significantly reduced the Mercedes-AMG Formula 1 team’s freight carbon emissions in a new test. The team made the switch for the final three European races of this season, using locally sourced hydrotreated vegetable oil (HVO)—made from food waste like fryer oil—to run 16 heavy trucks as they hauled the team between grand prix in Belgium, the Netherlands, and Italy.

Over a distance of 870 miles (1,400 km), it says the use of HVO resulted in less carbon emissions—44,091 kg less to be specific, which is a decrease of 89 percent compared to normal fossil fuel diesel.

The race cars are a rounding error

A push for greater fuel efficiency in Formula 1 has resulted in some fairly remarkable engineering. A current F1 powertrain is as complex as the sport has ever seen, combining comparatively tiny but extraordinarily efficient V6 gasoline engines with hybrid systems that recover energy under braking and from the turbocharger spinning.

This is something that everyone involved is rightly proud of, but in terms of reducing the sport’s carbon emissions, the fuel burned by the race cars is frankly irrelevant. F1 measures fuel by weight, and each car is allowed 220.5 lbs (100 kg) for the race. Being extremely generous, we can triple that to account for three hours of practice sessions plus qualifying, but that’s still only 661 lbs (300 kg) per car, of which there are 20, and this year they’ll race 23 times in total.

But each team flies about 80 people to each race. And they need a whole lot of equipment; obviously the race cars and all the tools to run them, but also massive mobile offices and hospitality suites for the European events, when everything travels by road freight. (For the rest of the calendar, all the teams’ cars and equipment travel together, and the gin palaces stay behind.) As transport and freight therefore accounts for much more of the carbon emitted by the sport, it’s clearly a good idea to try to reduce that.

Mercedes first tried HVO in one of its trucks as it drove back from the Hungarian Grand Prix to the team’s base in Brackley, UK. The real test began following this year’s Belgian Grand Prix, when 16 trucks used the fuel to drive 186 miles (300 km) to the Dutch Grand Prix in Zandvoort, the Netherlands, then another 684 miles (1,100 km) to the Italian Grand Prix in Monza, Italy. The entire journey was fueled by locally sourced HVO, apart from the last 12 miles (20 km) “due to supply challenges,” the team says.

Analyzing the data, it says that HVO saved 97,204 lbs (44,091 kg) of carbon dioxide emissions compared to diesel, an 89 percent reduction.

“Sustainability is at the heart of our operations. Trialling the use of biofuels for our land freight is another example of our commitment to embed sustainability in every decision we make and action we take. We aim to be on the cutting edge of change and hope we can make the adoption of sustainable technology possible as we are all in the race towards a sustainable tomorrow,” said team principal and CEO Toto Wolff.