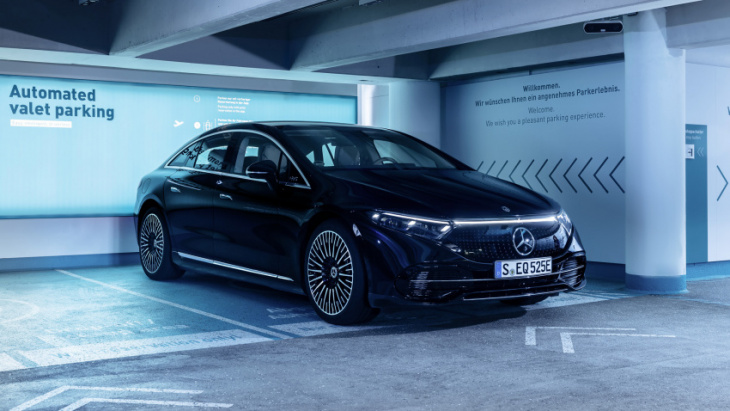 Another major milestone on the road to fully self-driving cars was reached this week with Mercedes-Benz and Bosch being granted regulatory approval for commercial use of a fully automated valet in a public parking station.

The approval came from Germany’s Federal Motor Transport Authority and at present only applies for the P6 parking garage run by airport parking management company Apcoa at Stuttgart Aiport, the main airport in Mercedes’ hometown of Stuttgart.

Mercedes and Bosch first demonstrated the automated valet in 2017 at the parking garage of Mercedes’ museum in Stuttgart, and the two have been testing the system at Stuttgart Airport since 2020.

You simply drive to a designated drop-off point at the entrance of the car park, hop out, and then use the Mercedes Me app to send the car to a pre-booked parking space. The system relies on Bosch-developed sensors located around the car park, which communicate with the self-driving system fitted in Mercedes’ cars. Later, the car returns to the drop-off point in exactly the same way.

The sensors can be retrofitted to existing car parks, including multi-story car parks like the one at the Stuttgart Airport. And since no doors need to be opened during operation, cars can be parked much closer to each other. This, according to Mercedes and Bosch, can make car parks 20% more space efficient.

The system is rated at Level 4 on the SAE scale for self-driving capability, as a human isn’t required but the movement is restricted within a geofenced zone. Currently, it is only available with Mercedes’ S-Class and EQS models built since July 2022, and with an activated Intelligent Park Pilot feature available via Mercedes Me Connect.

Mercedes and Bosch have also been testing the automated valet in the U.S. The system was demonstrated at a parking garage in Los Angeles earlier this year.

Mercedes is also leading when it comes to self-driving technology for private use out on the road. The automaker offers a Level 3 self-driving system known as Drive Pilot, which is currently limited to use in Germany and being prepared for U.S. launch. Available in the S-Class, the system at present can handle certain highways but only at speeds up to 37 mph and with another car in front.