The automaker's largest electric SUV joins the lineup, with seating for seven. 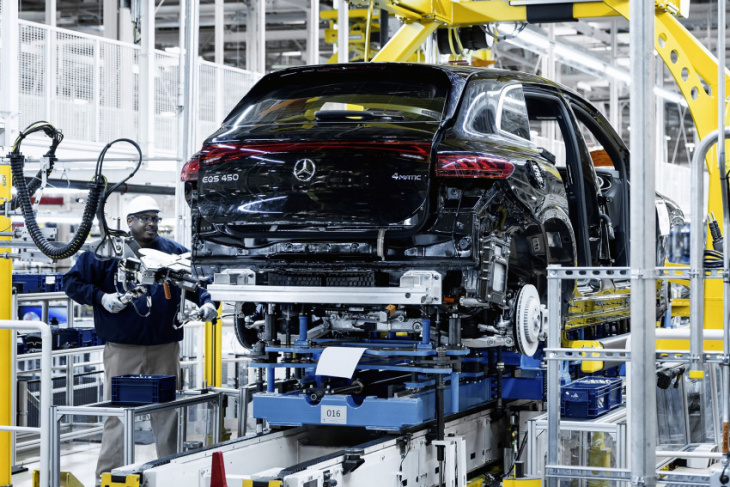 Mercedes’ large electric SUV is headed to buyers soon, after the automaker began production of the new model at its Tuscaloosa, Alabama, plant. The latest addition to Mercedes’ battery-electric lineup, the EQS SUV will be offered in rear- and all-wheel-drive flavors, with the latter dual-motor version producing 536 hp and 633 lb-ft of torque, thanks to a 107.8-kWh battery shared with the EQS sedan.

Slated to be offered in five- and seven-seat forms, the EQS SUV is the largest EV in Mercedes’ lineup, mirroring the role of the gas-engined GLS-Class that has been on sale for over a decade.

Production of the EQS SUV in Tuscaloosa began just a few months after Mercedes opened a new battery factory in Bibb County, Ala., with the battery based on a modular architecture also used in the EQE and EQS sedans, which are produced in Germany.

“Our production network is very well positioned for the sustainable and rapid scaling of electric vehicle volumes,” said Jörg Burzer, member of the Board of Management of Mercedes-Benz Group AG, Production and Supply Chain.

Mercedes’ electric lineup has seen fast growth over the past two years, having long eclipsed Tesla’s offerings, with several models joining the lineup in 2022. Just among electric SUVs alone, Mercedes has recently launched the EQA, EQB, and EQS SUV, with the EQE SUV due later this year. Of these, the latter three will be offered in the US, with Mercedes keeping the EQA and EQC in Europe and a few other markets for now.

Among other things, production of batteries and vehicles in Tuscaloosa will allow Mercedes to deliver vehicles quicker, if not with the benefit of the new federal tax credits, as the cutoff point for its availability for SUVs is $80,000.

Sales of the rear-wheel drive EQS 450+ and the dual-motor EQS 580 4Matic will begin in a matter of weeks, with the electric SUV expected to start around $90,000.

“With the new EQS SUV joining our production portfolio of all-electric Mercedes-EQ models, we reached another important milestone in our strategy to go all electric by the end of the decade—wherever market conditions allow,” Burzer added. “I am absolutely sure that our great Tuscaloosa team will make the electric SUV another global success.”