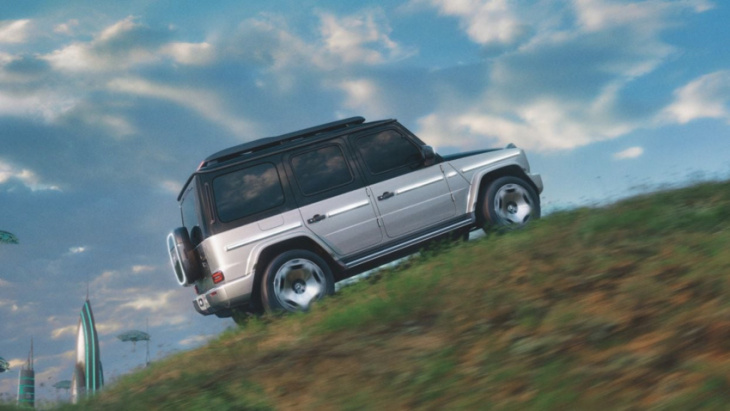 The polarizing Mercedes-Benz G-Class will will off-road into the EV world with its EQG, the all-electric G-wagen. It’ll fling forward via up to four electric motors, as confirmed in this video last year. The familiar rear-mounted spare tire appears to be replaced by a cargo box big enough to hold, perhaps, a charging cable — similar to other EQ models from the M-B, it won’t feature a frunk (front trunk).

“From the start, it was decided that the electric G-Class should be at least as good as the internal combustion engine model both on-road and off-road. We didn’t want to compromise on capabilities,” said Emmerich Schiller, head of Mercedes-Benz’s G sub-brand, in an interview with British magazine Autocar. He added it’ll have an “unparalleled combination of luxury and off-road ability for electric vehicles.”

Schiller went on to say that the EQG will ride on a modernized version of the frame based on the gasoline-powered G-Class and will be available with four electric motors, one close to each wheel. Each motor will be linked to a mechanical two-speed gearbox with high and low-range gearing, according to Autocar.

With four motors, a G-Turn feature is enabled, letting the driver do a 360-degree turn in place (see below). While silly on pavement, this could be very helpful in off-road conditions, if that’s what you decide to do with this expensive machine. A plus is that it lets you control exactly the amount of torque each wheel gets.

Donuts-on-demand.@MercedesBenz’s upcoming EQG gets four electric motors and a ‘G-Turn’ function that sees it spin on the spot.Steering wheel paddles let the driver decide if it turns left or right as the throttle is planted.
First prototype ride for me. Shaken and stirred. pic.twitter.com/GjoUv8XTQ1

Number-wise, horsepower, torque and maybe most importantly, range will come later; Schiller suggested buyers will have numerous powertrain options. The battery should have a usable capacity of about 100 kilowatt-hours and the same cell technology found in the EQXX concept. It’ll be housed in a case to let the EQG ford through relatively deep water. “In off road, it is less about the overall range and more about driving hours,” Schiller told Autocar. “We’ve seen some incredible figures during testing.”

While specific numbers haven’t been released, MotorTrend claimed after a three-hour off-road session, the battery’s state of charge went from 73 per cent down to 61 per cent, using a total of 34 miles (55 km).

As with any EV, slamming the scales is a predicament and here, the company aims to keep it below 3,500 kg (7,716 pounds) — keep in mind that a gasoline G-Class is nearly 6,000 pounds. With such weight, towing will suffer and it may not even be offered in the first generation.

The Mercedes-Benz EQG is scheduled for a 2024 release. We have just one question for you: what do you think of the EQG? Let us know in the comments.