Mercedes: Arguing new wing detail probably not worth the risk

Mercedes Formula 1 technical director Mike Elliott believes it may not be worth arguing with the FIA over its as-yet unraced new front wing.

A new front wing for the Mercedes W13 was publicly displayed at the United States Grand Prix last weekend but not used at all, amid questions over the legality of the specially-shaped fasteners between the two upper flaps.

But Elliott says not running the wing was Mercedes’ plan all along because that was the only version, and was brought to the US for freight reasons, whereas more will be shipped in time for this weekend’s race in Mexico so both drivers can run it, with spares available too.

The dispute over the wing comes down to the regulations around what the primary purpose of a design is.

Mercedes contends the primary purpose of the fasteners on the wing is to keep it together, but the counterargument is that they are shaped and spaced deliberately to direct airflow outwards, which is something the 2022 technical rules aimed to avoid. “There’s fuss about it because in the regulations it talks about the primary use being for mechanical or measurement purposes and clearly there’s a secondary benefit of an aerodynamic design which is in there as well,” Elliott said.

“We’ll decide whether we want to argue that or not. Actually, it’s not worth a huge amount.

“That detail looks interesting but it’s not the big thing on the front wing.”

When teams bring new designs, they will run things past the FIA Technical Department and usually get things cleared in advance.

This has taken on an extra dimension in the budget cap era as teams do not want to waste development time and money on something that will immediately be ruled illegal.

If a design turns up that has been provisionally given the green light by the FIA Technical Department it can still be protested, as anything can be, and if that is the case it comes down to whether the FIA stewards agree with the original FIA interpretation.

Elliott suggested that there was initially pushback from the FIA.

“We go through a CAD review process with the FIA before we come to the circuit, that happens all the time,” said Elliott.

“So, it was something that was seen there and then they came back and said ‘oh, we’re not so sure about this’.

“I think there’s an argument to be had, whether we want to have it is another question. 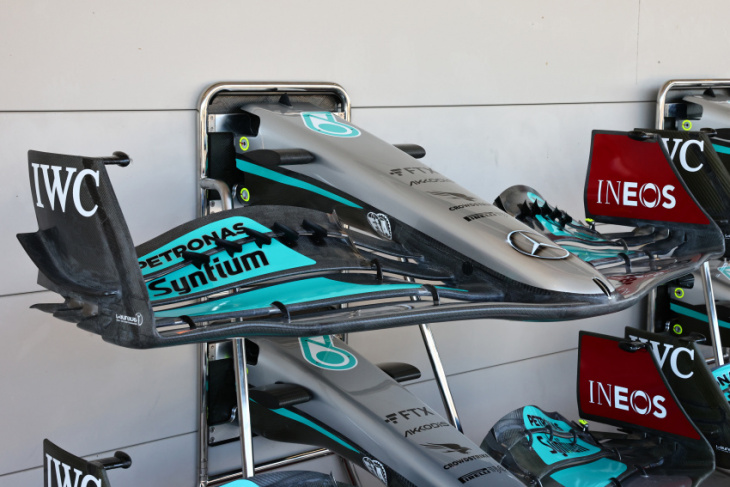 Speaking on Sunday morning at Austin, Elliott said Mercedes had not made its mind up whether to tweak the wing or not.

He said that the team had “not spent a lot of time thinking about it” during the US weekend but would do in the days before Mexico.

“Personally, I think we could argue them,” he said. “But the question becomes whether we want to or not.

“The gain for those bits is so small, is it worth the risk of falling foul of the stewards?”