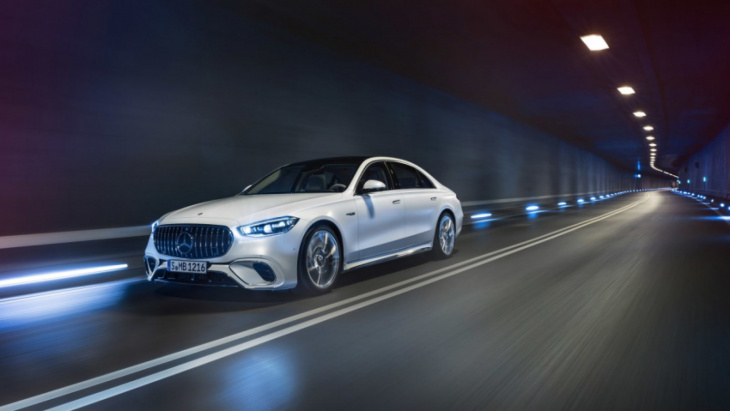 Mercedes-AMG has revealed the long-awaited S63, its next electrified model, this one featuring a combined 790bhp from a hybridised V8 powertrain. The largest of AMG’s saloons have typically topped the S-class range in two flavours – S63 V8 and S65 V12 – but AMG will replace both with this single electrified model, typically featuring more power and torque than both its predecessors.

The powertrain features a combination of elements we’ve seen before, pairing AMG’s venerable M177 twin-turbocharged 4-litre V8 engine with an electrified rear axle similar (but not identical) to the one found on the GT63 S E Performance and new C63 E Performance. Together the powertrain generates a peak power figure of 790bhp, with torque rated at 1055lb ft. Of those totals, the V8 produces 603bhp, with the electric motor good for 93bhp of continuous output and up to 187bhp in short bursts. In terms of torque, the V8’s 664lb ft is available between 2500rpm and 4500rpm, with 236lb ft coming from the electric motor.

AMG’s electrified rear axle comes with some differences to its battery in both capacity and operation. Unlike the units found in the GT63 and C63 – which both have 6.1kWh of usable storage for a very limited EV range – the S63 upsizes capacity to 13.1kWh giving it a longer range of around 20 miles. The battery pack is one of AMG’s own developments, but doesn’t quite have the explosive energy of the units found in the C63 S and GT63 S E Performances. It does come with a 400V electrical system though, and still has its own cooling system with a 14-litre coolant circuit. 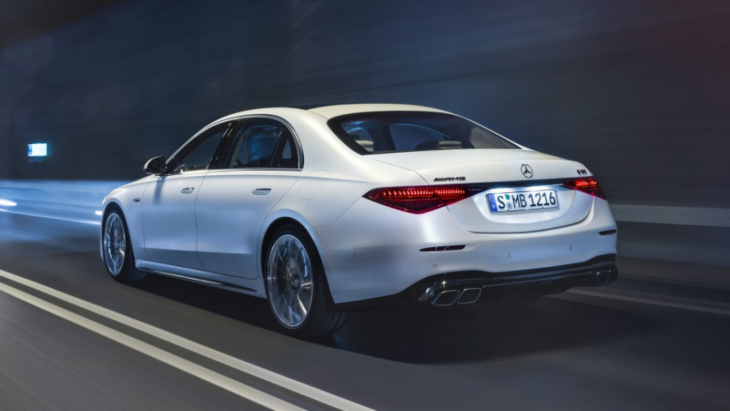 The larger battery pack sits above the composite rear drive module, which integrates an electronically-controlled limited-slip differential, electric motor and its own two-speed transmission. This adds to drive from the V8, which is sent through a familiar nine-speed torque-converter automatic transmission with a wet clutch on startup to the rear wheels. The front wheels can then be driven by both petrol and electric drive which is sent back up through a secondary prop shaft and front driveshafts.

Joining this drivetrain hardware is a kitchen sink’s worth of chassis tech, including rear-wheel steering, an air suspension setup with adaptive dampers and active roll stabilisation. Standard wheel sizes are 20-inch front and rear, with 21s optional, behind which sit a composite braking system with 400mm and 380mm discs front and rear, with six-piston calipers on the front and sliding units on the back.

The new S63 is so far only available with the short wheelbase body, but even so will hit the scales at 2595kg according to AMG. This doesn’t seem to dent performance times too much though, as it’ll still reach 62mph in just 3.3sec, and continue on to a 155mph (limited) or optional 180mph top speed. With its extended all-electric range, the WLTP economy rating of 53mpg and a 100g/km CO2 emissions are much better on paper than other electrified AMG models, whether these figures will be achievable in the real world is another matter. 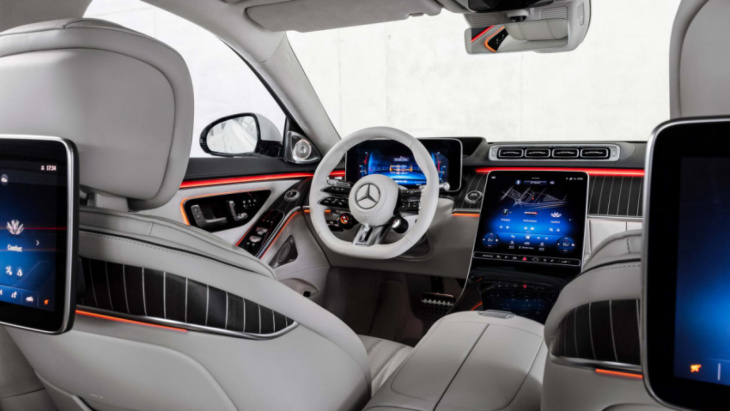 Design wise, AMG has finally won the battle to fit an S-class with one of its own grilles, making it the first four-door S-class in history to feature a full-size Mercedes three-pointed star on its nose. It also has replaced the standing badge with AMG’s own roundel and fitted vertical grille strakes. The rest of the bodywork is mostly unchanged, with more aggressive openings on the front bumper to house its larger cooling system and a set of quad exhaust tips integrated into the rear. The S63’s interior is as per the standard model, with an extended range of colour and trim options to reflect its sportier disposition.

Mercedes-AMG has not confirmed UK prices or availability as yet, but we expect it’ll cost a big chunk more than the most expensive short-wheelbase S-class currently available in the UK, the £103,000 S500. The S63 doesn’t really have any direct rivals as it stands, as traditional big fast saloons like Audi’s pure-V8 S8 costs are much less powerful and less expensive, starting from about £100,000. BMW’s new M760e has a plug-in hybrid powertrain, but is less performance-biased with a longer EV range thanks to its larger battery pack. It’s also over 300bhp down on the AMG, and costs £117,555.

2023 Mercedes-AMG S63 Spied On Video Thundering Around The Nurburgring