Formula 1 has been pushing for greener solutions to the travel-heavy sport. At the end of the 2021 season, the Mercedes-AMG Formula 1 team used HVO 100 biofuel instead of the standard diesel in some of its freight trucks. Lewis Hamilton says the F1 cars are at odds with sustainability, but using biofuel on the freight side of things seems promising.

The Mercedes-AMG Formula 1 team switched from diesel to biofuel 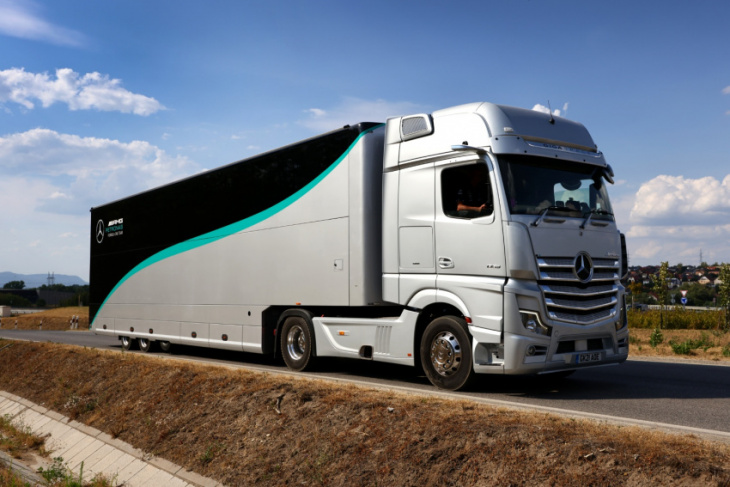 According to Ars Technica, the Mercedes-AMG Petronas F1 team switched from diesel to biofuel for its freight trucks for the last three races of the season. During the three-race test, the change to biofuel helped significantly reduce the team’s freight carbon emissions. Instead of traditional diesel fuel, the trucks used locally sourced hydrotreated vegetable oil (HVO) made from food waste.

This biofuel powered 16 heavy Mercedes-AMG F1 team trucks between the races in Belgium, the Netherlands, and Italy. Over a distance of 870 miles (1,400 km), the use of HVO resulted in 97,204 pounds (44,091 kg) fewer carbon emissions. That works out to an 89% reduction compared to standard fossil fuel diesel, Ars Technica says.

How far did the Mercedes-AMG PETRONAS F1 team travel to test this out?

Fuelling a more sustainable future ☀Between Spa, Zandvoort and Monza we successfully trialled the use of biofuels in 16 of our race team trucks. This resulted in an 89% reduction in freight emissions.
Further details below ?

Formula 1 has been working on its sustainability in the last few years, which has led to some significant changes with the actual race cars. However, each Formula 1 team has about 80 people, with 10 teams on the grid. These teams need all the necessary equipment every weekend, including the actual race cars. Tools, mobile offices, and anything 80 people need must travel along with it.

When possible, such as during the European races, most of the equipment travels together by road freight. Transportation and freight are a big part of the weekend. The Mercedes-AMG Formula 1 team first tried HVO as it drove back to HQ in Brackley, UK, from the Hungarian Grand Prix. During the Belgian Grand Prix, Mercedes used 16 trucks to drive 186 miles (300 km) to the Dutch Grand Prix in Zandvoort, the Netherlands. After that, the F1 traveled 684 miles (1,100 km) Italian Grand Prix in Monza, Italy.

Mercedes was able to use locally sourced HVO for the entire trip, except it apparently ran out in the last 12 miles. Either way, the Mercedes AMG Petronas F1 Team says it saved 97,204 lbs (44,091 kg) of carbon dioxide emissions using HVO over diesel.

The current Formula 1 cars use “comparatively tiny but extraordinarily efficient V6 gasoline engines with hybrid systems that recover energy under braking and from the turbocharger spinning.” This is a move in the right direction, but the cars are almost the least of the problems.

At this point, every bit helps. If the Mercedes-AMG Formula 1 team makes an effort, maybe more teams will too. The 2023 race calendar considered travel more, so these savings may be even more significant.