The Mercedes-AMG C63 is very different from what we’ve seen before, but it will be much more powerful despite halving its engine size

Mercedes-AMG has at last pulled the covers off its next flagship C-Class – the halo C63 super-sedan – and it is very different to what we’ve seen from this badge in the past.

For the new C63 that is now called the E Performance, the 4.0-litre twin-turbocharged V8 engine has been scrapped in favour of the same turbocharged four-cylinder engine found in the Mercedes-AMG A45 S sold in Australia – albeit with a plug-in hybrid system.

Total output for the new C63 E Performance is 500kW/1020Nm from the combined four-cylinder and electric motor power, making this generation of C63 the most powerful one yet. 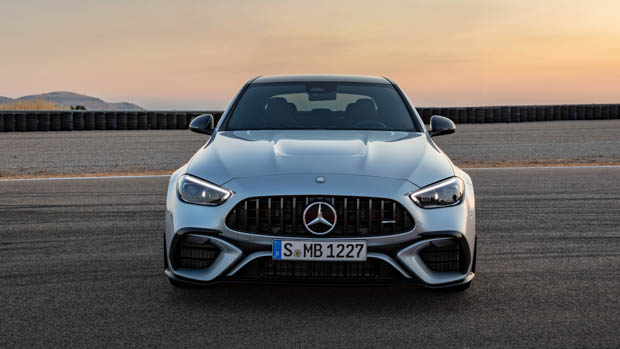 But with great power comes even greater weight. The new C63 sits on the scales at 2145kg, making it slightly heavier than a Toyota Hilux SR5 dual-cab ute.

The C63 will compete with the BMW M3 and the Alfa Romeo Guilia Quadrifoglio in a segment of rapid performance sedans.

The new Mercedes-AMG C63 E Performance will arrive in Australia during the middle of 2023. 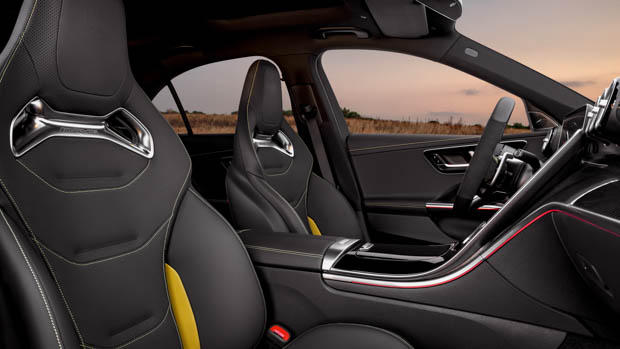 What is this new powertrain and how does it work?

Mercedes-AMG has gone away from its V8 underpinnings to instead use the M139 turbocharged four-cylinder engine available in other AMG products such as the A45 S and the upcoming AMG SL roadster.

But the turbo four-cylinder is now also paired with a rear-mounted electric motor to produce total combined outputs of 500kW/1020Nm. The combustion engine alone produces 350kW/545Nm.

The electric motor on the rear axle produces 150kW of power and is integrated with a two-speed transmission and an electronically-controlled limited-slip differential within one electric drive unit. A relatively small 6.1kWh battery pack is also mounted at the rear that weighs 89kg. 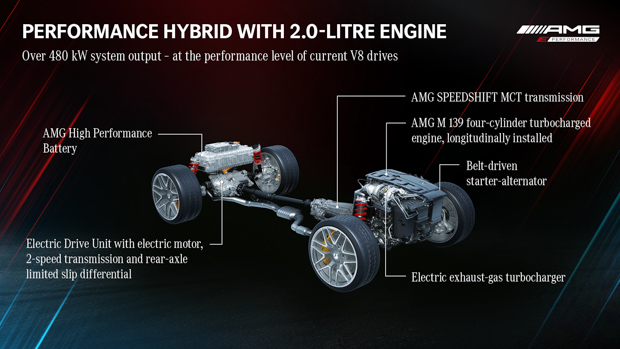 What the powertrain of the new C63 looks like!

An electrically-assisted turbocharger features on the new C63 that works by essentially placing an electric motor within the walls of the turbocharger to help keep the turbo spinning even when off throttle, reducing turbo lag.

A drift mode will also be available which will allow the driver to enjoy sliding the car if the conditions are right. Charging an AMG still seems weird to us

The sound of the new AMG

AMG claims that the new sound of the AMG C63 E Performance is authentic thanks to a pressure sensor located in the exhaust system. AMG says that “under all conditions, the Performance hybrid is immediately recognisable as an AMG by its sound”.

It’s unclear whether an owner could specify via the settings a ‘V8 mode’ to bring back the sound of the outgoing 4.0-litre V8 engine but piped into the cabin via speakers. We will have to ask AMG! 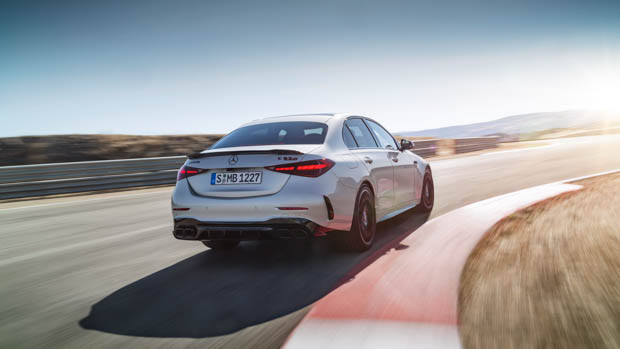 A brief history of the AMG C-Class

The history of AMG with the C-Class has always been one that has welcomed change over the years, from the W202 generation right through to the current W206.

The W204 C-Class used a single engine – the well-respected 6.2-litre naturally-aspirated V8 engine – that was actually badged as the C63, the name we now know and love.

For the most recent W205 Mercedes-AMG C63, the 6.2-litre engine was scrapped for a smaller 4.0-litre twin-turbocharged engine that produced 380kW/700Nm in final S form. A lesser powered twin-turbocharged V6 AMG C43 was also available.