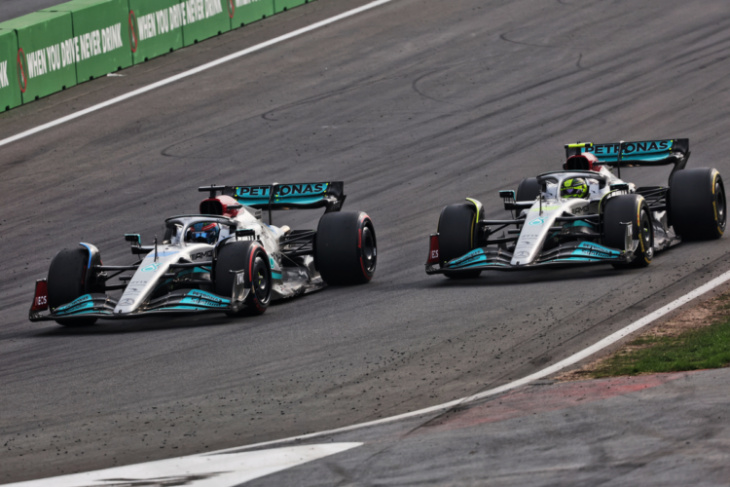 The Trackside Engineering Director for Mercedes, Andrew Shovlin, has admitted that the German team were too optimistic with their expectations of the W13 ahead of the new regulations for 2022.

The design approach that Mercedes turned up for pre-season testing in Bahrain was one of the most radical ideas on the grid. That was of course to do with the sidepods, or lack thereof, on the W13.

Since then, they have had to contend with one of the worst cases of porpoising on the grid as they failed to meet the same expectation they had held themselves to for the previous eight championship-winning seasons.

“It has been a very interesting journey,” Shovlin said in a recent interview. “I think we were overly optimistic in where we thought we could run the car.

“The car that we launched had a lot of downforce close to the ground, and there were a lot of issues being able to actually run the car on track there.

“We’re not where we would like to be, but the direction of travel looks okay. So we’re working very hard to try and improve that.”

The improving performance of the W13 has been a significant topic of the 2022 season as they slowly get closer to the front runners of Red Bull and Ferrari.

It has become quite apparent that the car is much more suited to the high downforce tracks such as Budapest and Zandvoort as opposed to the low downforce/high-speed circuits like Spa and Monza.

“Spa was quite interesting,” Shovlin added. “It was quite painful at the time, but we’ve often said that our worst weekends are the ones that reward us with the most learning.

“The learning that we took from that does give us an indication of where we need to develop the car in future.

“At Zandvoort, we were expecting to be more competitive, so it was reassuring that it played out. The underlying problem is sort of rooted in how we’ve developed the car and how it’s working as an aerodynamic package.”

Keyword: Mercedes admits it was ‘overly optimistic’ for 2022 F1 car