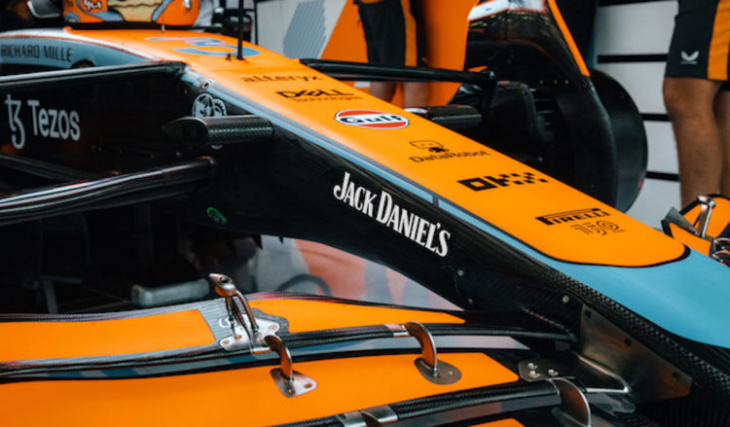 The McLaren Formula 1 team has signed a new sponsor in the form of Whiskey brand Jack Daniel’s, which will become an official partner for the 2023 season.

The alcohol brand, which is one of the best-selling whiskey’s in the world, will see its name adorn McLaren’s ’23 F1 car as part of a multi-year sponsorship agreement.

Jack Daniel’s has never been involved in F1 and the deal hints at F1’s improving popularity in the United States, which sees the country host three races next year; Miami, Las Vegas and Austin, Texas.

The team says the deal will help Jack Daniel’s to “evolve its global presence and reach new consumers.” With the two brands set to “host a variety of events and media and hospitality programs throughout the 2023 F1 season.”

Jack Daniel’s branding will feature on the nose of McLaren cars as well as on the driver’s overalls and pit crew helmets.

“We are thrilled to welcome Jack Daniel’s to the McLaren F1 Team,” said team boss Zak Brown. “Together we will look to reach new audiences as well as hosting a variety of events together. 2023 is an important year for McLaren as we commemorate our 60th birthday, and we are excited to celebrate with an iconic brand like Jack Daniel’s by our side.”


View more: Everything you need to know about the McLaren GT

Alex Palou Alex Palou will stay with Chip Ganassi Racing after all, meaning Felix Rosenqvist retains his IndyCar seat at McLaren SP, both teams have confirmed. However, the former will still proceed with a Formula 1 testing programme with McLaren Racing, which seems to have been a key factor ...

Palmer: Multiple F1 teams will look to sign De Vries Has Herta earned the right to enter F1? 2021 IndyCar champion Alex Palou has tested Formula 1 machinery with McLaren on home soil for the first time this week, with Pato O’Ward also in action. The test, in McLaren’s ...

A ‘pessimistic’ Lando Norris laid out the harsh reality for McLaren ahead of Formula 1’s Italian Grand Prix, where a repeat of last season’s 1-2 result looks highly unlikely despite both cars starting on row two of the grid. Norris will start third and Daniel Ricciardo fourth at Monza, ...


View more: ‘Pessimistic’ Norris lays out how far McLaren has fallen in F1

McLaren Solus GT – Real-life hypercar based on a video game

McLaren Solus GT: Here's What You Have to Know About This Single-Seat Hypercar