A back-of-the-grid penalty for engine component changes meant Norris started 17th at Spa and while Alpine’s Esteban Ocon, who started alongside Norris in 16th, charged to finish well inside the top 10, Norris ended up 12th as the third car in the Alex Albon-led ‘DRS train’. 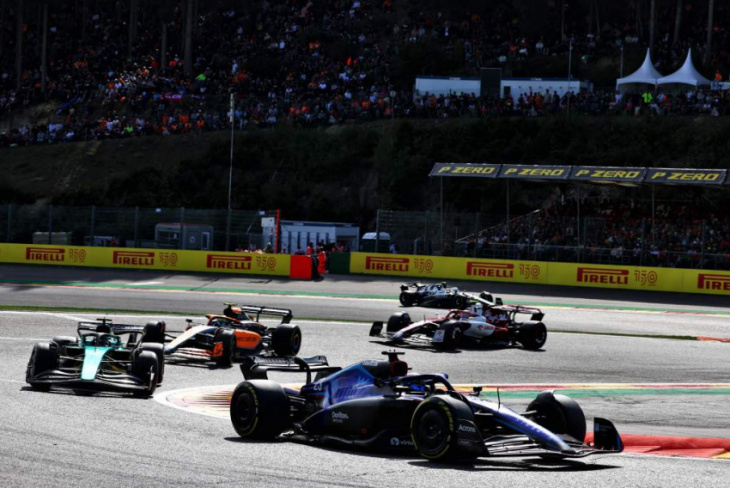 His team-mate Daniel Ricciardo didn’t fare any better as his seventh-place grid start came to nought when he dropped behind Albon early in the race and struggled to make progress after his team was forced to swap out his lower-downforce rear wing earlier in the weekend, leaving him limited on the straights.

Pure straightline speed wasn’t a concern for Norris but the pace of the MCL36 pretty much everywhere else around Spa-Francorchamps was – as was as a potential DRS deficit McLaren faces.

“I think we were probably one of the quicker ones on the straights,” Norris said when asked by The Race if the low drag parts McLaren brought to Spa worked.

“Where we lose a lot is in DRS for some reason.

“In DRS we’re pretty shocking, some cars are a lot better than others.

“Like, in a pure straightline condition, I think yesterday [Saturday] we were quicker than Red Bull.

“But then the Red Bull opens DRS and gains another 15kph and is a completely different league to a lot of people, [so there’s] something we’re maybe missing with DRS.

“Maybe that makes our overtaking opportunities less than other people.

McLaren team boss Andreas Seidl believes McLaren’s tardiness out of the La Source hairpin was a major contributing factor to its struggles on Sunday and hid its true pace.

“When we look at the top speeds today we were competitive,” Seidl said.

“I think the biggest issue was a lack of traction out of Turn 1 and that’s why we were vulnerable to other cars.

2We were getting overtaken and at the same time, couldn’t overtake cars because we couldn’t get close enough out of Turn 1.

“In terms of pure lap time in free air, we would have been quicker [than what we showed].”

Why some F1 teams have more powerful DRS 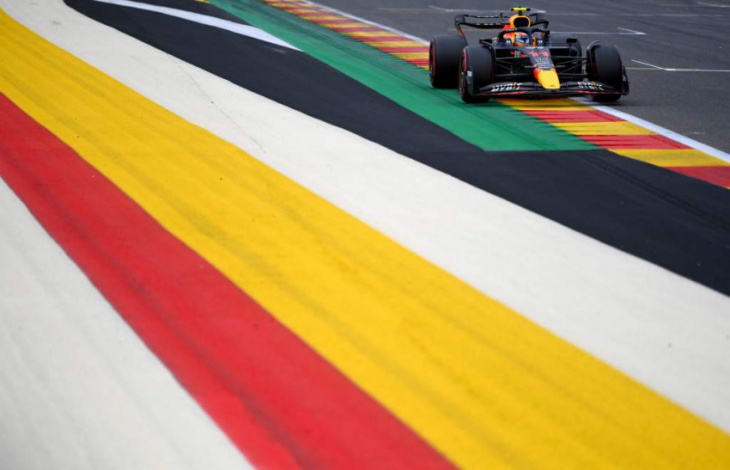 To make the DRS work, it’s not as simple as reducing the angle on the rear flap. There is a minimum opening of 10mm and a maximum of 85mm, but that is just a regulation you have to comply with and there are other design demands.

You don’t want the flap itself to go past its aerodynamic centre, otherwise you can’t use the aero load to close it quickly and you will need a two-way actuator to first of all open it and then to shut it. In the past we have seen a team like Red Bull suffer from ‘flutter’. This is when the flap sits around its aerodynamic centre, offering neither a positive nor negative load.

On circuits that require, or where the team decides to use, less downforce, the frontal section of the wing is reduced. This makes it more difficult to have an efficient wing when the DRS is closed and then get large drag reduction when it is opened. You can see on Norris’s rear wing that it is a fairly small section. 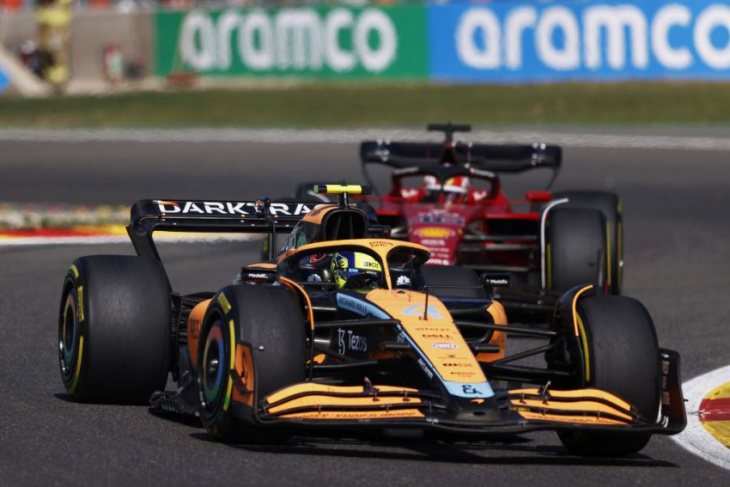 When you have a requirement like this, it will be the chord length of the rear flap compared to the mainplane that defines the drag reduction. So, in effect, on low-downforce wings, the slot gap opening needs to come forward.

This, in turn, could negatively influence how quickly the airflow reattaches when the DRS is closed.

You do see variations in the speed gained when the DRS is open, which is down to a multitude of factors including how much downforce you are running and the overall efficiency of the wing.

Norris pointed out Red Bull was getting a bigger DRS drag reduction effect, which will be a consequence of carrying more downforce thanks to having a more efficient wing already. And these disparities will always be bigger at a compromise downforce circuit like Spa than, say, Hungaroring, where everyone runs maximum downforce.

So summing up, it’s a lot more complicated to get the benefit of large drag reductions when the DRS is used on a low-downforce wing compared to a high-downforce wing. That’s why Monza is going to be especially interesting.

Norris said he realised by “lap three” that he was in for a long afternoon that was unlikely to yield points as he spent much of the second half of the race bottled up in a train of cars behind Albon and had to duel a soft-tyre shod Zhou Guanyu for longer than he would have liked.

When asked why Ocon was able to advance to seventh while Norris finished half a minute behind in 12th, the British driver replied: “They are a lot quicker than us, so it makes a big difference to have a better car.”

The grand prix was in line with Norris’ expectations with McLaren once again taking a step back in the pecking order from Saturday to Sunday, as has been the case many times this season.

“We’re always quicker on a Saturday than a Sunday,” Norris added. 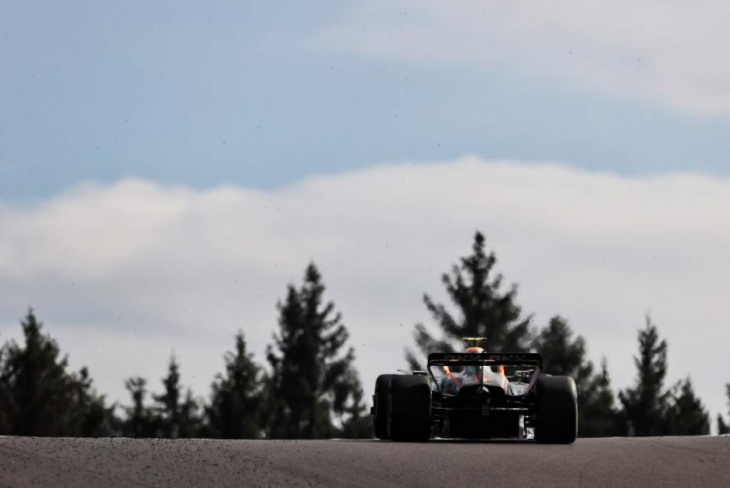 “That’s just a fact, everybody is closer together on a Saturday than Sunday. Maybe we take a slightly bigger step back on a Sunday than other teams, but I think that’s because we always do a good job on Saturday.

“I feel like I extract a lot of the car on a Saturday. I feel like a lot of other teams have much better cars and don’t do as good a job… I could be wrong. I’m probably wrong.

“The car performed how we expected, and our expectation was that it’s not going to be too good.”

Spa marks McLaren’s fourth double non-points finish of the season on a weekend where Alpine added 16 points to make its advantage in the fight for fourth place in the constructors’ championship 20 points over McLaren.

Norris hopes the higher downforce requirements of Zandvoort will bring the team’s performance back to where it was at the Hungarian GP, where Norris was able to finish ahead of both Alpines.

The Dutch GP did prove to be a difficult weekend for McLaren last year as it featured the only qualifying session where Norris failed to reach Q3 all year.

“High-downforce track hopefully means more in line with Budapest kind of pace I hope but you never know as it was our worst track last season,” Norris explained.

“Hoping this season not the case because some of the problems we had in previous years are maybe not so evident this year, now we’ve got other problems, so we’ll see.

“Can’t be a lot worse than this weekend.”

To celebrate its return to racing in Asia, McLaren Racing and its primary partner OKX reveal a new livery for the Singapore and Japanese Grand Prix. The new livery features the MCL36’s Fluro Papaya combined with splashes of neon pink together with cyberpunk-inspired engine illustrations. McLaren states that the ...