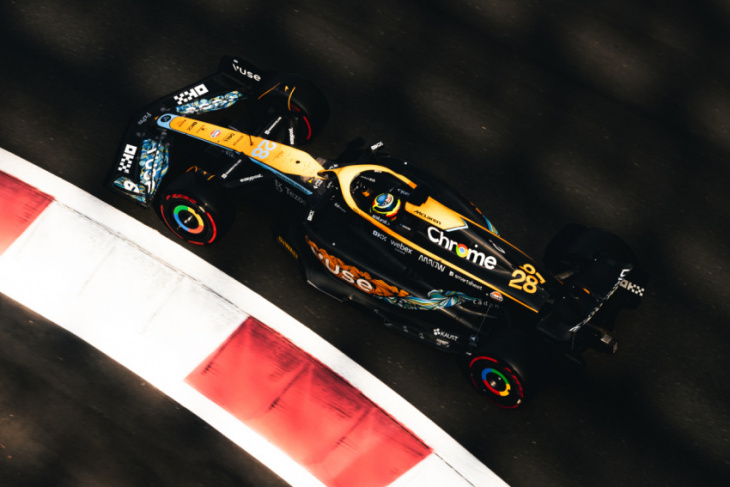 The end-of-season Formula 1 test in Abu Dhabi was an important “building block” for Oscar Piastri in what was his first official outing with McLaren.

Having been released by Alpine, the Australian joined his new team in Yas Marina, completing 123 laps over the course of the day.

That was briefly interrupted when a power unit sensor forced him to stop on track, triggering the first red flag of the day.

However, once the car was recovered, the problem was quickly diagnosed with Piastri able to continue his programme.

“It’s a cool feeling,” he said when asked by Speedcafe.com for his thoughts on being an official Formula 1 driver rather than just testing.

“It’s a very different feeling to the Young Driver Test I did last year because I knew that was kind of just a day to have fun in an F1 car whereas obviously this year, it’s a building block towards next year.

“But yeah, it was also my first day with the McLaren, and get to know everyone in the team and try and improve and get back up to speed for next year.”

He joined the squad at Paul Ricard in the week prior to the Sao Paulo Grand Prix in what proved a useful toe in the water for both team and driver.

That outing allowed some of thee Day 1 issues to be sorted, allowing the Abu Dhabi testing to be even more fruitful, and focused on building relationships rather than the mechanics of driving for the team.

“That’s one of the keys of days like today,” Piastri explained.

“In terms of lap times, it’s meaningless because you never know what everyone else is doing, so that’s not the first port of call for the day.

“Getting to know my engineers and mechanics, everyone in the team, because there’s a lot of new names to learn, you know, that’s up there with one of the most important things today.

“Especially getting into good communication with my engineers in particular, and learning how we give feedback and what we want to adjust, and just getting to learn each other.

With pre-season running limited, each driver is poised to get just 1.5 days of running in Bahrain next February, Tuesday’s running is even more important.

“I don’t know if it puts that much pressure on today but it’s definitely important,” Piastri said when asked by Speedcafe.com about the importance of the Abu Dhabi test.

“The cars are to the same regs for next year.

“Of course, everyone’s going to be trying to go quicker and quicker next year but it’s my first day in a 2022 F1 car, and there’s definitely a few things that are different – bouncing around on the straights is something new.

“So, yeah, it’s an important day but I think, getting to know the team and just getting going; I think the aim of today was to try and learn as much as I can, and come out today with areas to improve rather than looking at where we are in terms of lap times.”

Piastri is set to head back to the United Kingdom where, later this week, he will be formally introduced to the McLaren factory staff.

Beyond that, the 2023 season begins with pre-season testing in Bahrain on February 23-25.