McLaren has officially arrived in India. In the bustling heart of Mumbai city, right next to an Italian marque with a Raging Bull on its crest, at the first newly-inaugurated McLaren showroom in the country, we saw three of the current line-up the Woking-based marque has on offer. Taking the centre stage at the inauguration ceremony in the beautiful spec of MSO, McLaren Special Operation, was the open-top 765LT Spider. 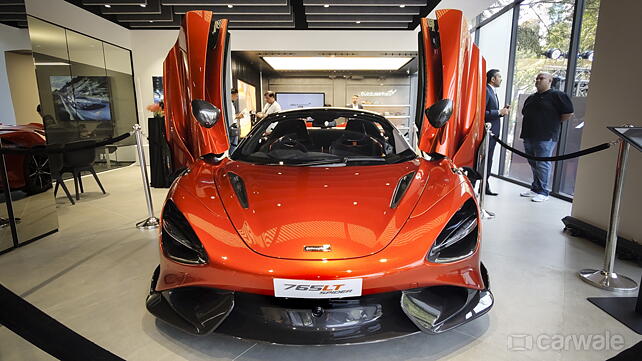 It was joined by the 720S Spider and the GT while we await the imminent arrival of the Artura in the next few months. And since we were among the lucky few in the country who got a chance to get up close and personal with this one beautifully specced 765LT, here we tell you more about it. 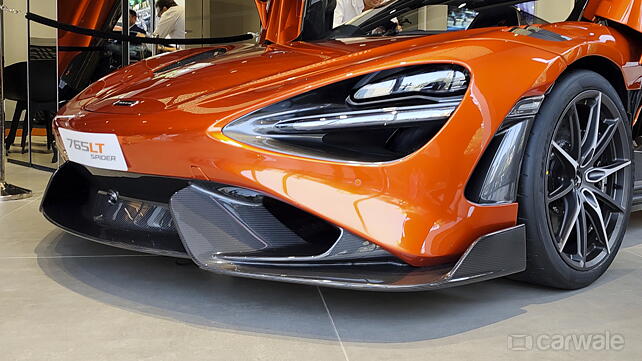 For the uninitiated, the LT in McLaren nomenclature stands for ‘Long Tail’ which is nothing but the re-profiled rear buttress with a bigger wing at the back that improves aerodynamics. It was first seen on McLaren’s Le Mans entrant – the F1 GTR race car. In 1997, the Long Tail version of the GTR was 100kg lighter than the previous F1 GTR. It completed five of the 11 rounds of the 1997 FIA GT Championship that year, and finished first and second in the GT1 class at Le Mans. Two decades later, the LT name was revived for the 675LT in 2015. 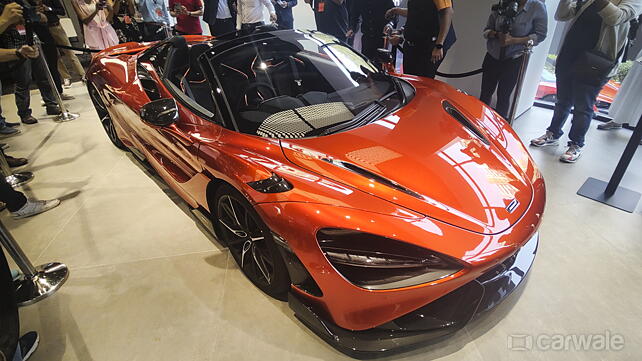 That brings us to the 765LT. It is the fifth car in the McLaren line-up since 2010 to wear the LT nametag after the 675LT and 675LT Spider, and the 600LT and 600LT Spider. Limited to 765 units globally, the 765LT is based on the well-acclaimed 720S and is a successor to the 675LT. The Spider version was introduced in July last year and is 80kg lighter than the 720S Spider. Moreover, compared to the hardtop 765LT, the Spider is just around 50kg heavier tipping the scale at 1,388kg. 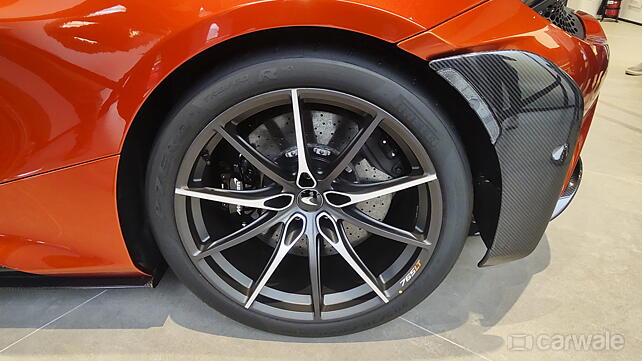 Sitting on Pirelli PZero Trofeo R tyres, the 765LT is fitted with Senna-sourced brake units. These are 15.4-inch CCM-R carbon-ceramic rotors on all four wheels which can bring the 765LT to a standstill from 200kmph in just 360feets (around 110m). 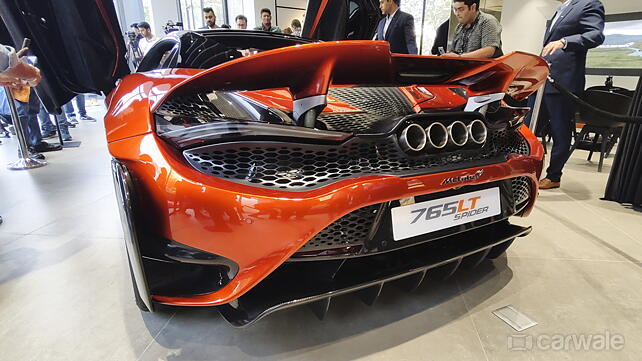 In metal, the 765LT is one of the few cars which look fast even when standing still. The level of detailing on the MSO spec version all around is astounding. With visible carbon fibre and the way each panel is shaped along with the glistening finish on that special paint job makes you look at it unblinking for hours and then some more. In fact, at places like under the body panels, around the door hinges and door locks, and beneath the grille, the original carbon fibre monocoque chassis is seen in all its glory. 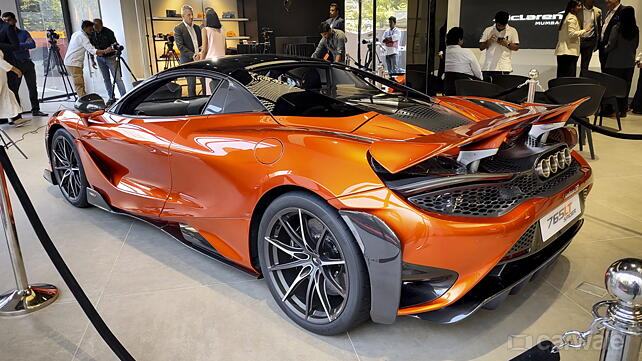 This being a Spider, the triple-patented retractable hard top claims to be the quickest and quietest in business. It can be operated at speeds up to 50kmph and goes up or down in 11 seconds. There are a total of eight electrical motors doing the job – two to fold the roof panel, two to raise and lower the tonneau cover, and two to control the flaps which deploy on the tonneau buttresses when the roof is open. 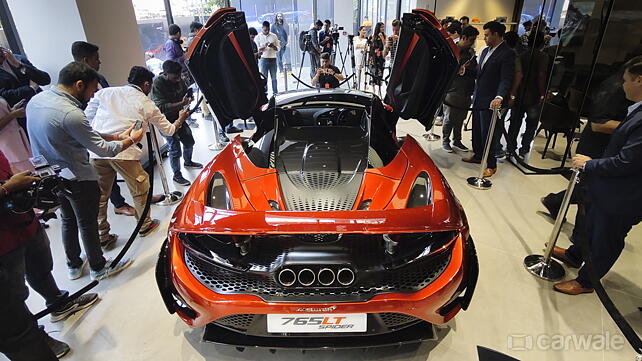 The plethora of functional air intakes on the body – on the front bumper, a couple of slits on the bonnet, two gills on the wheel arches, carbon fibre canards jutting out beautifully, and lastly the panel behind the headrest that stands out like a guy-rope on a tent, make the 765LT feel special. And we call it functional because look closely at each one of the intakes and you’d realise either there’s a radiator behind it or you can see the path the air would flow around the car at high speeds. 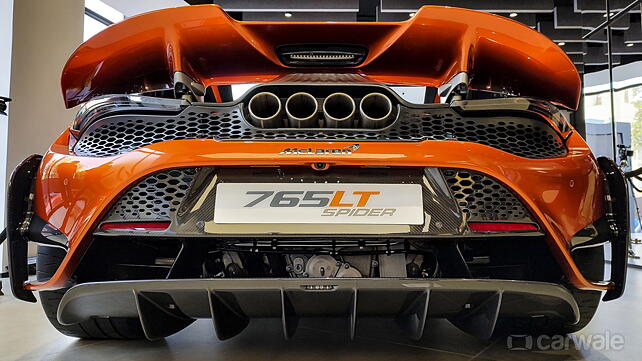 Add to it the active spoiler at the back, which is much larger than you’d expect, thus earning it the distinct LT name. We like how the quad-circular exhaust tips are integrated in-line and are without any fanfare, unlike the rest of the car – function over form. Then some parts of the engine are visible too, but there’s an overdose of mesh at the back and more exposed carbon fibre. 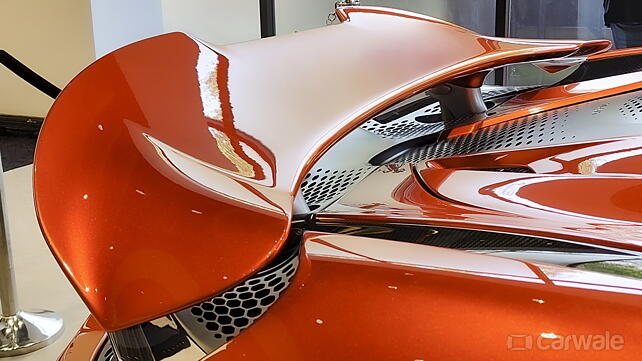 As for the LT on the 765, the rear bumper and active rear spoiler boost downforce by 25 per cent, and it is 0.4-inch longer than 720S. If you thought McLaren doesn’t have the sense of pizzazz like its next-door neighbour, then the butterfly opening doors would prove you wrong. 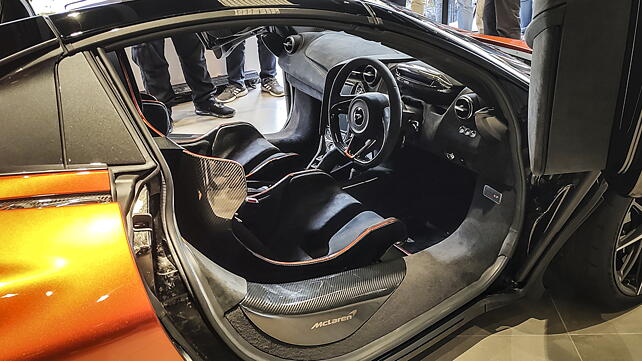 Full disclosure, we didn’t get a chance to sit inside the one-of-one McLaren 765LT present at the showroom. So, we got only a few quick ogles and drooling looks inside the two seater’s Alcantara and more carbon fibre-draped cabin. To push the extreme lightweight measures, it just has a thin exposed carbon fibre shaped as bucket seats (the one you’d find in a proper race car) with soft Alcantara-wrapped pads glued at appropriate places. These seats are scrounged directly from the halo Senna and save close to 20kg in overall weight. 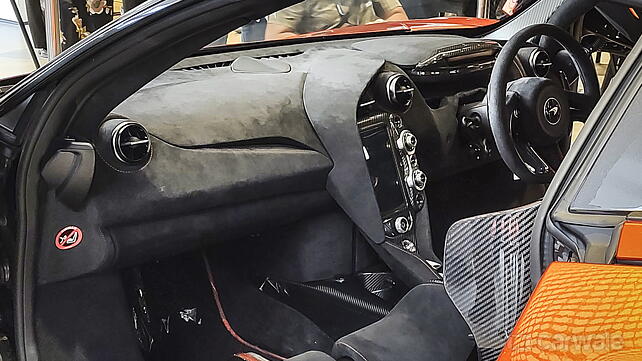 It’s not all penury inside either as the lightweight character would have you believe. Like the 720S, the steering here is simple – like a race car – and behind it is McLaren’s special folding driver’s display. The vertical screen on the centre console is integrated with McLaren Track Telemetry (MTT) and Bowers & Wilkins sound system. Even the 360-degree camera display shows up on the screen. Meanwhile, the changes between the 765LT Coupe and Spider are limited. The Spider we saw had an extra carbon fibre upper trim behind the seats and the coupe’s engine window was replaced by the Spider’s folding roof mechanism. What’s more, there is an additional luggage space under the rear tonneau cover, apart from 150 litres of storage at the front. 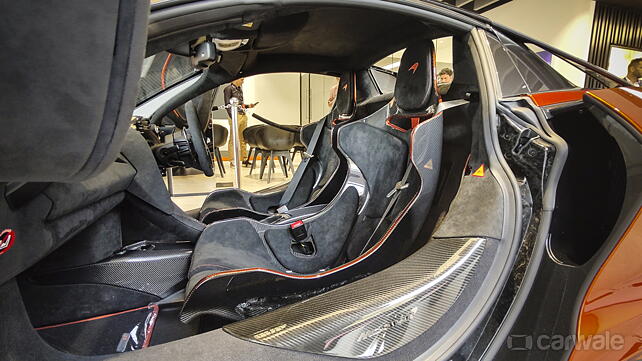 The MSO offers two customisable packs for the 765LT – Clubsport and the LT Black Pack. Of course, the car we saw was the most extreme work of MSO. With MSO, each customer can personalise a zillion of bits inside and outside their McLaren to create bespoke and one-of-a-kind cars. 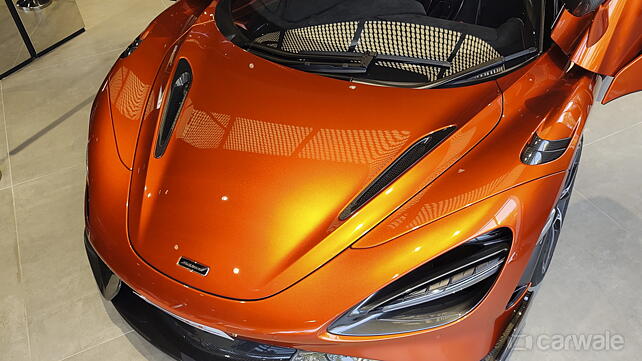 With a mid-mounted configuration, which means the engine sits behind the driver but ahead of the rear axle, the newer M840T 4.0-litre twin-turbocharged V8 in the 765LT puts out 765PS (around 755bhp). The torque figures are improved over the 720S, now 800Nm over the 720S’ 770Nm. This output brings up the power-to-weight ratio to 590bhp-per-tonne. Then, the seven-speed dual-clutch transmission has a revised gear ratio for 15 per cent quicker acceleration which is further helped by the dynamics of the Long Tail. 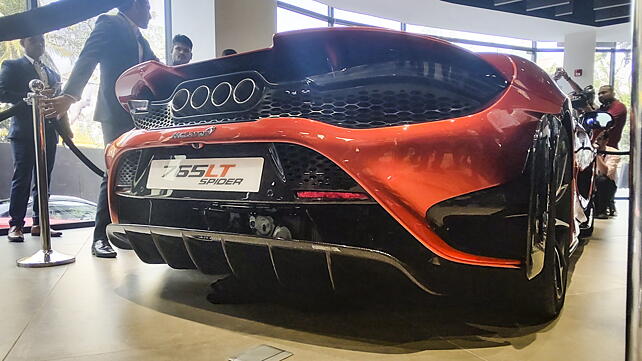 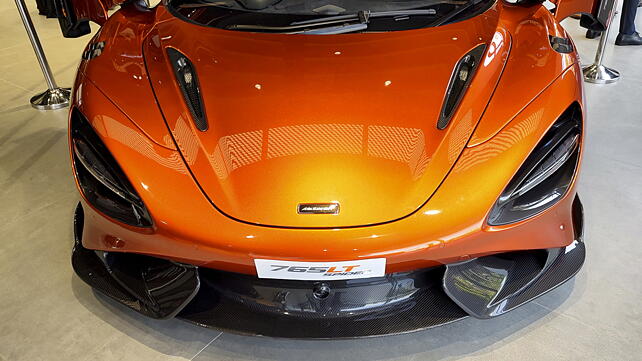 The 765LT we saw at McLaren India’s showroom inauguration was already sold out. Since it was personalised by MSO, there’s no way to put a price on it. Secondly, the 765LT is already reaching its production limit so if you want one, get your chequebooks and reach the Mumbai showroom at the earliest. But fear not, McLaren India will be launching their newest entrant in the supercar category – the Altura – early next year. As for the other McLaren models, the British marque would be doing a road show in seven major cities across the country. I hope they invite us too!

Sainz ends post-season F1 test on top for Ferrari 2023 F1 Chinese GP set to be cancelled Oscar Piastri says his Formula 1 debut with McLaren in Abu Dhabi was a “pretty special” occasion, as he took to the track for the Woking-based squad for the first time. The ...