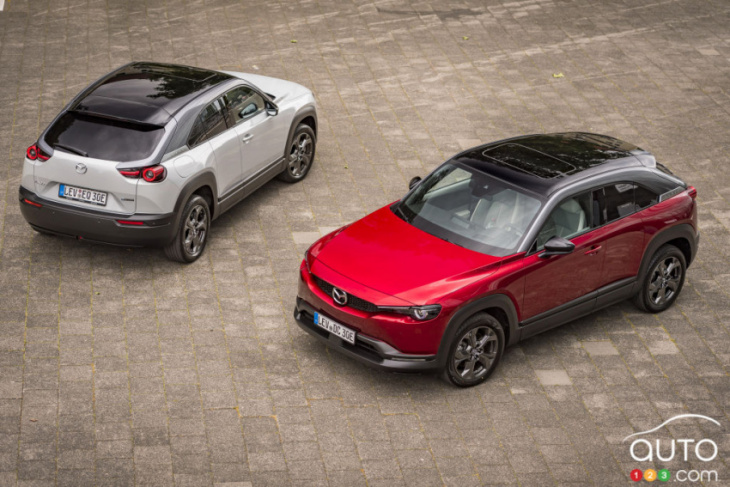 •    The company is set to introduce nine new electrified models by 2025.

•    By 2030, the company will sell only electrified vehicles in Canada.

When it comes to electrification, not every manufacturer is moving at the same pace. The reasons for this vary from brand to brand. When it's not for financial reasons, it's for philosophical reasons that things are evolving differently.

Mazda is one of the automakers that has proceeded more slowly than most. However, the company is taking a major step forward, as evidenced by the release of an action plan for Canada by 2030, when the company's entire product line will be electrified.

The plan begins with the arrival of the CX-90 and CX-70 plug-in SUVs next year. By 2025, Mazda plans to launch a total of eight new hybrid, plug-in hybrid and all-electric models in Canada, not including the MX-30 already part of the lineup. The new models include a CX-50 hybrid, the CX-70 and XC-90 PHEVs, four new hybrid vehicles and a new all-electric SUV pencilled in for 2025.

The MX-30, currently sold only in Quebec and British Columbia, will be sold nationwide starting next year.

“We are very excited to be sharing more details about our electrified future in Canada, focused on the right vehicles in the right segments that our customers are asking for,” said David Klan, President and CEO, Mazda Canada. “The CX-90 and CX-70 PHEV models coming next year will bring a level of performance above anything we've ever offered in Canada, along with electrified efficiency, and the craftsmanship our customers expect from Mazda.”

Mazda says its vehicle sales forecasts in Canada show that all-electric models will make up 15 percent of the market, hybrid and plug-in hybrid proposals another 10 percent. In other words, 75 per cent of new vehicles will still be powered solely by internal combustion engines, the company believes.

The company also believes that “Over the next decade plus, internal combustion engines will still be in a wide range of vehicles that consumers purchase and drive and there is an opportunity to keep improving this technology so we can continue lowering emissions of ICE vehicles in tandem with the shift to EVs.”

Mazda’s corporate philosophy is not dissimilar to Toyota’s which believes in a plurality of solutions while other manufacturers see an all-electric future.

Mazda describes its philosophy, in fact, as a “multi-solution approach”. The company's strategy is to “offer different products and technologies – including much more efficient internal combustion engines and the use of sustainable fuels, that best suit the local market and society's demand for sustainability.”

More announcements are sure to follow, both regarding the arrival of those new models, as well as a new structure thought out from the company's SkyActiv approach.

Keyword: Mazda’s Electrification Plan for Canada: Heavy on the Hybrids, Thin on the All-Electrics