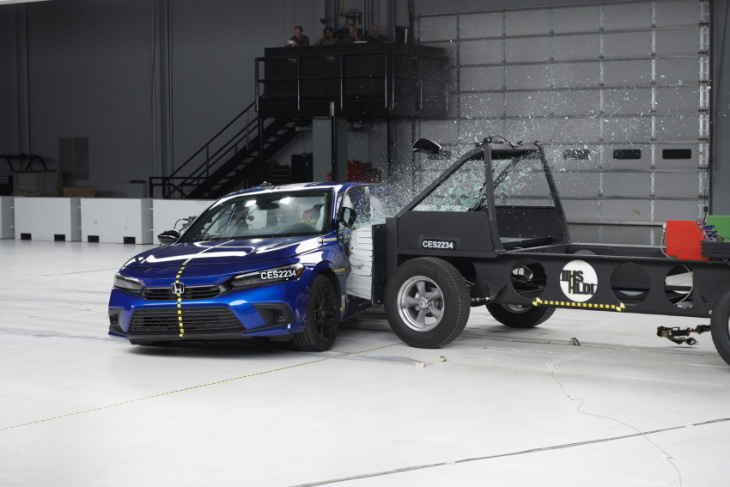 Several small cars have successfully passed a new, more stringent side-crash test at higher levels, but some are rating “poor,” according to the U.S. Insurance Institute for Highway Safety (IIHS). The updated test uses a barrier that better simulates being T-boned by an SUV.

When vehicles sufficiently pass all tests, the IIHS will award Top Safety Pick or Top Safety Pick+ designations. Because the new test is still ongoing, its results don’t yet affect those top awards — but starting in 2023, a vehicle will have to earn “good” or “acceptable” in the new test before it can be considered for a Top Safety Pick, while “good” will be required for Pick+.

When testing small and midsize SUVs, and midsize cars, the IIHS found that a higher ride height seemed to tie in with better performance on the new test, since the barrier strikes closer to the floor. However, the shorter length of a small car may be in its favour. “Doors tend to be weaker than the B-pillar and the frame surrounding the occupant compartment,” said Raul Arbelaez, vice-president of the IIHS Vehicle Research Center. “Small cars have less of that weaker space because of their shorter wheelbase and occupant compartment.”

The structure and safety cage of the Mazda3 vehicles held up well, and the side airbags prevented the driver and rear passenger dummies from hitting their heads on hard interior surfaces, although there was a moderate risk of injury to the driver’s torso and pelvis. In all of the “acceptable” cars, the structure and safety cage held up “reasonably well” but there was a small amount of intrusion into the cabin. The airbags in the Civic and Corolla models protected the dummies’ heads, but in the Sentra, the driver’s head moved past the airbag and hit the window sill. Among all “acceptable cars,” there was a chance of moderate or significant pelvic and torso injuries.

In a previous test of seven midsize cars, only the Subaru Outback earned the highest “good” rating, while the Hyundai Sonata and Volkswagen Jetta earned “acceptable.” The Toyota Accord earned “marginal,” while the Chevrolet Malibu, Nissan Altima, and Toyota Camry rated “poor.”

Midsize SUVs did better, with ten of 18 tested rating “good.” They were the Ford Explorer, Infiniti QX60, Lincoln Aviator, Mazda CX-9, Nissan Pathfinder, Subaru Ascent, Toyota Highlander, and the Volkswagen Atlas, Atlas Cross Sport, and ID.4. The Buick Enclave and Chevrolet Traverse were “acceptable,” while the Honda Passport and Pilot, Hyundai Palisade, Jeep Wrangler Unlimited, Kia Telluride, and Nissan Murano were “marginal.” When 20 small SUVs were tested in December 2021, only the Mazda CX-5 earned a “good” rating. In a more recent test, the all-electric 2022 Mustang Mach-E earned the highest “good” as well.

Kia is all set for its next big launch in the Indian car market, the facelifted version of the Seltos. The refreshed Kia Seltos is reported to be launched in India in mid-2023, which is sometime between July to September. It means that the new Kia Seltos facelift might arrive ...

Image: TRIPPLAAR KRISTOFFER/SIPA (AP) The Hyundai/Kia theft drama just keeps getting worse. The shockwaves from what started as a dumb social media trend have turned into a full-blown epidemic of headache for millions of Hyundai and Kia owners across the country. The latest blow: Insurance companies refusing to cover ...

Does Subaru Have a Three-Row SUV?

Here’s What Could Power the 2024 Subaru Crosstrek

What Comes With a Fully Loaded 2023 Subaru Crosstrek?