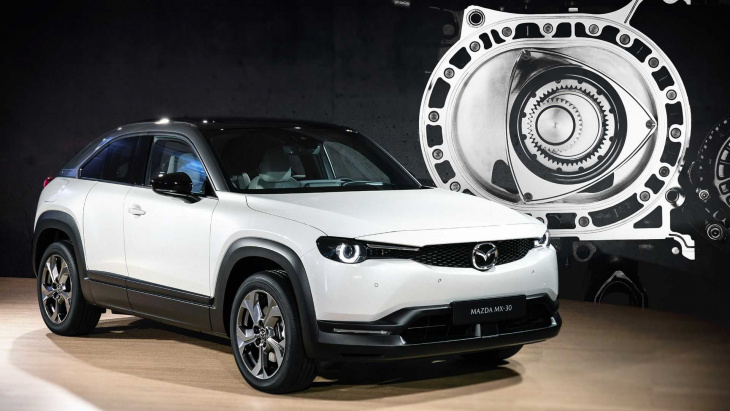 The rotary engine returns as a range extender.

After years of waiting and rumors, Mazda finally revives the rotary. The MX-30 R-EV with a Wankel engine as a range extender debuts at the Brussels Motor Show on January 13, 2023.

Don’t get this confused with a revived RX-7, though. The rotary engine operates at a constant speed to serve as a range extender for recharging the battery. Mazda positions the solution as having the benefits of an electric drivetrain but with the range of a combustion powerplant.

Range is a weakness of the existing MX-30 EV. Its 35.5 kilowatt-hour battery offers an EPA-estimated range of 100 miles (161 kilometers).

The displacement of the rotary engine in the MX-30 R-EV isn’t yet available. It’s also not clear whether Mazda would increase the electric motor’s output to offset the weight of the additional engine.

In 2020, Mazda said an MX-30 with a rotary range extender was under consideration. The company made the plan official later that year. As of 2021, the automaker intended to offer this variant of the EV in the US.

Mazda and the Wankel engine have a close relationship. The company originally licensed the tech from NSU, and engineers at the Japanese firm worked to improve the powerplant. The Cosmo debuted at the 1964 Tokyo Motor Show as the premiere of the rotary-powered Mazda. Full production didn’t begin until 1967. Models like the RX-3 and RX-7 made the rotary more accessible.

However, the fuel consumption and exhaust emissions of the rotary remained sticking points throughout the engine’s life. These factors were among the reasons why the RX-8, the last Wankel car to date available to customers from Mazda, went away in 2012.

Mazda’s engineers never gave up on the rotary, though. We have seen a variety of patents and heard rumors about the Wankel’s continued development over the years.

Is the 2023 Mazda CX-5 worth buying? Is the 2023 CX-5 interior still modern? What could the 2023 CX-5 do better? We’re spending a week with the elegant Mazda CX-5, and it doesn’t have any significant changes for the model year. But that’s fine. It doesn’t exactly need any ...

Preparations for towing Heavy duty Towing Pack (Part No: TF11ACUTP) Clearview ‘Next Gen’ Towing Mirrors Competent and comfortable towing Fuel consumption We wanted to see how the BT-50 performs as a heavy-duty tow vehicle. (Image: Mark Oastler) The tow-bar has a 3500kg tow rating and maximum tow-ball download of ...


View more: A Pagani V12-Powered Mazda RX-7 Because Why Not?