MAZDA Motor Corporation (MMC) has announced an update to its Mid-Term Management Plan and basic management policies in the lead up to the end of this decade, by which time electric vehicles are expected to account for between 25 and 40 per cent of its global sales.

The announcement was accompanied by the enigmatic inclusion of images depicting a sleek sports coupe captioned “Vision Study Model” that could be an electrified successor to the RX-8 or even a replacement for the MX-5 that Mazda has previously confirmed will deploy some form of electrification.

Considering what Mazda says are “significant changes that have occurred in the business environment”, including environmental regulatory trends, heightened geopolitical risks and the rapid development of advanced technologies, the Japanese firm has set forth the following basic policies.

Under what Mazda calls its human-centred philosophy, the Hiroshima-based manufacturer says it will remain committed to contributing to resolving the social challenges of curbing climate change through electrification, appropriate to “regional characteristics and environmental needs”.

In other words, Mazda will continue to sell petrol and diesel vehicles where it can, for as long as it can. Where other car-makers have taken a deep dive into building or commissioning battery factories to secure supply, Mazda conservatively states that it will “consider investing in battery production”.

Mazda says it will conduct “in-depth research” on how people interact with vehicles to form a “view towards realising a safe and secure automotive society”, while at the same time maintaining the value of the Mazda brand.

To achieve these goals, the company will form further “collaborative projects with a broad range of partners” while continuing to invest in “people who are the fountainhead of our company”.

“To achieve carbon neutrality by 2050, we have set an interim target of making Mazda factories carbon neutral worldwide by 2035,” said MMC in a statement.

“We will pursue this initiative on three pillars: energy conservation, shift to renewable energies, and use of carbon neutral fuels. In this effort, we will contribute to realising a sustainable circular society while coexisting with local communities and residents.”

On the topic of renewable energies, MMC said it will apply a three-step approach to electrification that will see up to 40 per cent of its fleet electrified by 2030.

“We have set out a three-phase approach through 2030 and will flexibly address electrification,” the statement read.

“In the first phase, we will make use of our technology assets comprising multiple electrification technologies to achieve both a reduction in our environmental footprint and produce attractive products.

“In the second phase, we will introduce a new hybrid system and, in China where electrification is advancing, introduce EV-dedicated vehicles as well as launch battery EV vehicles globally.

“In the third phase, we will promote the full-fledged launch of battery EVs and consider investing in battery production. We estimate Mazda’s EV ratio in global sales to rise to a range between 25 percent and 40 percent as of 2030.”

In addition to working towards greater electrification of its fleet, MMC said it will further focus its efforts on creating value via the collaboration of information technology and people. It says that it hopes to eliminate new Mazda vehicles as a cause of fatal accidents by the end of the next decade.

“Mazda will conduct in-depth research of people to understand and create models of mechanisms between the human body and brain in our aim to accelerate the development of human-centered advanced driver assistance technology and eliminate new Mazda vehicles as a cause of fatal accidents avoidable with automotive technologies by 2040,” the statement continued.

“In addition, we will facilitate investment to train digitally-proficient personnel capable of easily utilising artificial intelligence and information technology.”

The statement also highlighted MMC’s continued efforts to reduce what it says is the overburden placed on finite resources by improving several pinch points in its manufacturing and logistics processes.

In this way, Mazda said it believes it can not only lessen its environmental impact, but further reduce costs as well.

“From a comprehensive viewpoint, we will look into both value chains and supply chains to thoroughly eliminate waste, irregularities, and overburdens to refine our costs, thereby enhancing our capability to reduce costs and resilience to reductions in production,” it concluded.

Mazda Australia currently offers just one battery electric model, the MX-30 EV, and will introduce its first family-sized hybrid model locally with the introduction of the CX-60 next year. 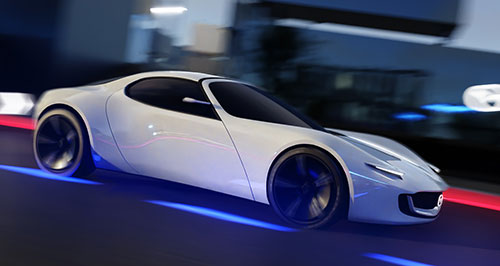