It was not a particularly difficult race for Verstappen, either. 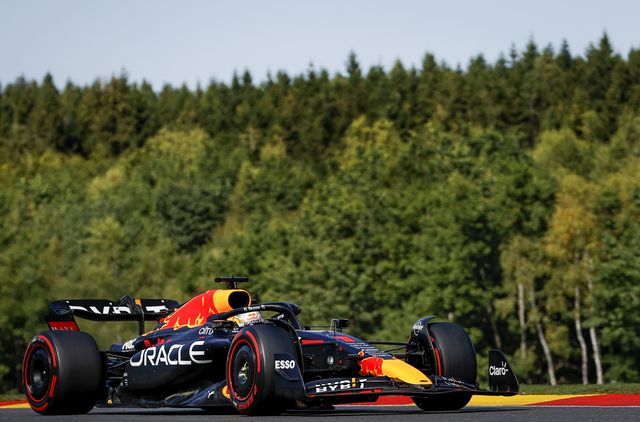 Traditionally, teams who choose to make wholesale engine changes late in the season during the V-6 turbo era are choosing to punt on a race and accept that they will not be fighting for a win in order to optimize their available power and reliability for the remainder of the season. Traditionally, cars and drivers are not as dominant as the Red Bull RB18 and Max Verstappen were at Spa Francorchamps this weekend.

After a third of the grid chose to take grid penalties, Max Verstappen started today’s Belgian Grand Prix in 14th. He was up into the top 10 after a chaotic lap 1 that ended in a safety car after two separate crashes. When the race resumed, he used his own overwhelming pace and the Red Bull’s startling straight line speed advantage to make quick work of the field before DRS was even activated. He was up to third by lap 10. Two laps later, with a little teammate help from then-second-place Sergio Perez and an early stop from race leader Carlos Sainz Jr., Verstappen led for the first time. Sainz would briefly retake the lead on the stop cycle, but Verstappen would get back to the top spot quickly.

Verstappen went on to beat teammate Sergio Perez by nearly 20 seconds. Oddly, it was not a particularly challenging drive for the championship leader. He simply had the faster car, made good decisions, and got to the lead. It’s the sort of race that makes winning a second consecutive championship, and a first without the controversy of last year’s race control catastrophe, look more and more like an inevitability.

Perez and Sainz completed the podium. George Russell finished fourth, a strong performance for a Mercedes team that looked lost in qualifying. Charles Leclerc looked set to come home fifth after also taking a series of grid penalties, but Ferrari chose to pit him for a shot at the single point for fast lap and left him in position to be passed by Fernando Alonso while his tires were cold. Leclerc fought back to take the spot, but a five second time penalty for speeding dropped him back to sixth anyway.

Esteban Ocon, Pierre Gasly, and the newly-extended Alex Albon completed the points-scoring positions. Lewis Hamilton, who crashed out of third after high-speed contact with Fernando Alonso he would later take the blame for, was one of the day’s two retirees. Valtteri Bottas, who spun avoiding Nicholas Latifi at the end of the day’sopening lap, was the other.

With the Summer break over, Formula 1 is now in the middle of a tripleheader. Next up is the Dutch GP at Zandvoort, followed immediately by the Italian GP at Monza.