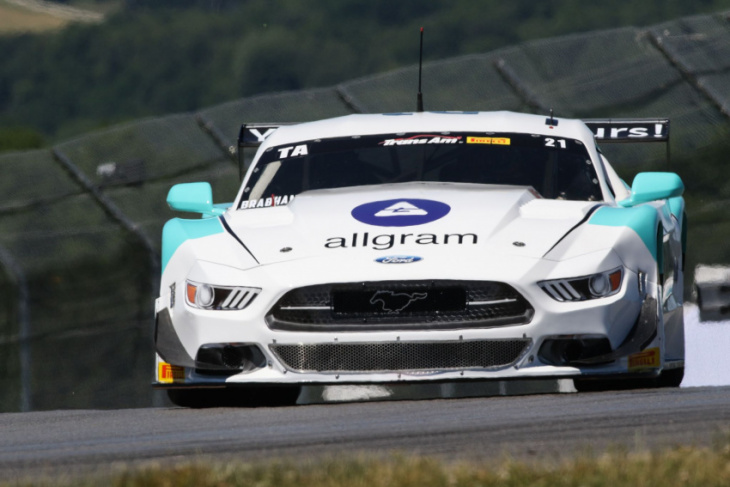 Matthew Brabham earned his second Trans Am Series presented by Pirelli race win Saturday at Mid-Ohio Sports Car Course, holding off his teammate Chris Dyson in the final lap to earn his first victory of the season and second in only three series starts. The win was hard fought, as Brabham battled the highly-competitive Kaz Grala and the always-fast Dyson to take the checkered flag.

When the green flag waved for the 100-lap race, polesitter and first-time entrant Grala in the No. 2 Technique Chassis/STEEL-IT Weaver Dodge Challenger battled side-by-side with Brabham in the No. 21 allgram Ford Mustang. Brabham captured the point position for lap one, but Grala regrouped and pulled ahead for the lead before the second circuit was complete. Once he was back out front, Grala held the lead until past the halfway point, but the CD Racing cars of Brabham and Dyson were never far behind. Grala finally relinquished the lead to Brabham on lap 25. Grala kept up his fast pace from the second position until nine laps later, when his Challenger began to billow smoke. He was forced to pull off the track with a differential issue on lap 34, ending his Trans Am debut and bringing out a full-course caution.

When racing resumed on lap 40, Brabham still had his work cut out for him, with teammate Dyson’s No. 20 ALTWELL Ford Mustang now in the second position. He held him off until a car in the sand trap brought out the second double yellow of the race two laps later, leaving only one lap of green-flag racing remaining once cleanup was complete. During the final lap, Dyson challenged Brabham until the final turn, but it wasn’t enough, and it was Brabham with the lead when the checkered flag waved. Staying cool under pressure in scorching temperatures, Brabham was also awarded the ChillOut Keep Cool Move of the Race. Brabham earned his second win in only three career Trans Am starts. His first came at Circuit of The Americas in last year’s season finale when he subbed for Chris Dyson.

David Pintaric in the No. 57 Kryderacing Ford Mustang returned to the track after a three-race hiatus and had a stellar race at his home track, running just behind Dyson the entire event and earning the third podium spot. He was followed by Ken Thwaits in the No. 7 Franklin Road Apparel Camaro in fourth, and Tomy Drissi in the No. 8 Lucas Oil Mustang in fifth. 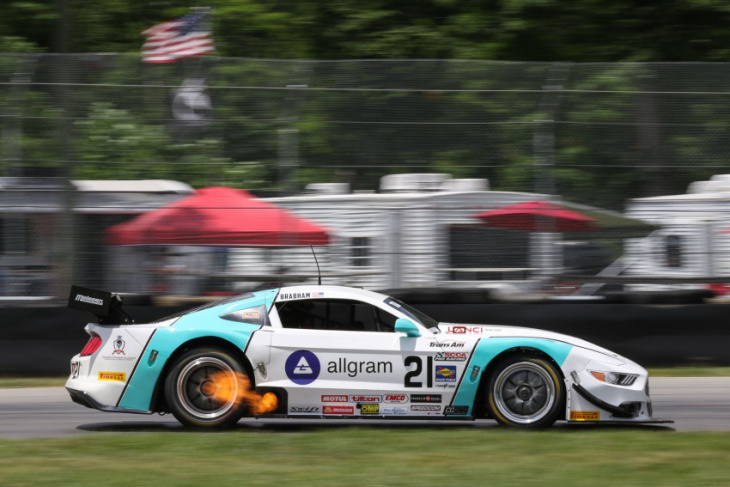 “These cars are some of the most fun cars I’ve ever driven in my life,” said Brabham in Victory Lane. When you have a team like Chris’ and the boys do such a good job prepping the car, it’s just a dream for me to come here and drive. I said at COTA [Circuit of The Americas] there’s no other team I could have just come in and felt at home like with these guys. Today was hard racing; I was pushing the whole race, and that was kind of our game plan. I told Chris ‘I’ll push the whole race, and if you want to save tires you can save tires.’ I think if there weren’t those yellows at the end, Chris probably would have gotten me. I had nothing left, I had no tires left and I was pushing hard the whole race. It’s a big shame for Kaz [Grala], it was great racing with him early in the race and we had some great side-by-side battles. He’s an incredible driver and I’m sure he would have been right there with us at the end if he hadn’t had issues. Thank you to Chris, to everyone at allgram, and everyone at CD Racing for making me feel at home.”

“That was one of the best races I’ve ever been in,” said Dyson on the podium. “Kaz came this weekend and brought Pancho Weaver’s car back out, and they were right up front. That’s fantastic for the series. Matt did a brilliant job all weekend, and we were nose-to-tail the whole way. We had a slightly different strategy; he was a bit more aggressive on tires and I think that helped him at the beginning. I was holding a little bit in reserve, but those yellows got in the way, otherwise it might have been really interesting. We just wanted to make sure the calls home to dad and Humaid [Masaood] were positive ones, so we kept it clean but we raced until the end because we wanted to put on a great show out here.”

“Being here on the podium feels really good, we can’t take this for granted,” said an emotional Pintaric. “It’s been a tough road the last two years with health issues and new-car bugs, but it’s so good to be back. In January of this year, I got COVID-19 pretty bad, I was down for a good eight weeks. We went to Sebring and I couldn’t finish three laps. It was a long road. By May, I started getting my strength back and we struggled with the car a little bit. Last week we were up at the June Sprints at Road America and finally got it. It’s so good to be back.”

The SGT race saw a father/son podium, with Milton Grant in the No. 55 Sentry Self Storage/Springhill Suites Porsche 991.1 winning the class and his son Carey Grant in the No. 6 Grant Racing Porsche GT3 Cup joining him on the podium in third. Lee Saunders overcame a mid-race pit stop to finish second in his No. 44 Landsearch LLC Dodge Viper. 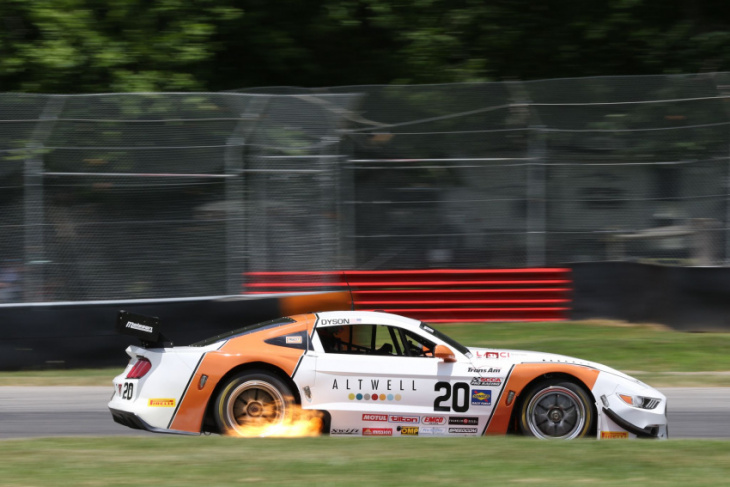 “I want to thank Jesus Christ, my savior,” said Grant. “This is my first Trans Am win, so after hitting my 500th race here at Mid-Ohio last year, it feels really good. My wife Ruth came to the race, and she supports me all the time, but she doesn’t usually come to the track with me. It’s great to have her here. Now she needs to be at every race so that I can get the win every race. I want to thank my crew for doing everything that needed to be done to get me here.”

In GT, Seth Lucas in the No. 29 Ave Motorsports Audi R8 won in his first race of the season, followed by Jack Rinke, making his series debut in the No. 33 Chevrolet Performance Camaro.

“This was is great; I want to thank everybody for coming out,” said Lucas. I want to give a huge thanks to Motul for sponsoring us, everybody at Ave Motorsports for supporting us this weekend.” 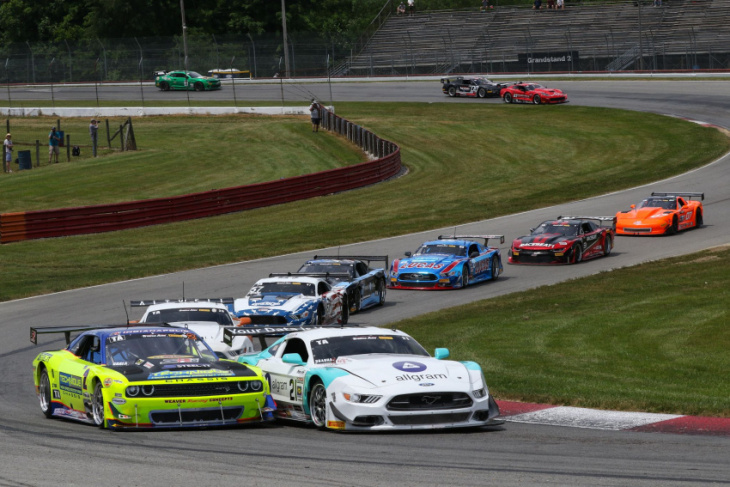 TA returns to the track next weekend, July 1-3, when Ryan Companies presents the Trans Am 100s at Road America.

The broadcast of Saturday’s race, presented by Franklin Road Apparel, will air on CBS Sports Network on Sunday, July 3 at 2:00 p.m. ET, with an encore presentation on Monday, July 4 at 1:00 a.m. ET.

TA returns to the track next weekend, July 1-3, when Ryan Companies presents the Trans Am 100s at Road America.

Will be a fun drive and more importantly, it will be a heartwarming experience. GTO recently shared this with other enthusiasts. Let’s go out and make the long weekend special for those less privileged than us! Huge shoutout to BHPian pcpranav for taking the lead on this, and showing ...

Way back in 2020, the Los Angeles Fire Department (LAFD) announced an order for an electric fire engine from Austria’s Rosenbauer Group, one of the world’s largest makers of fire trucks. It took two years, but the truck was finally put into the LAFD fleet at a ceremony last ...

Dennis Levitt got his first Tesla, a blue Model S, in 2013, and loved it. “It was so much better than any car I’ve ever driven,” the 73-year-old self-storage company executive says. He bought into the brand as well as Elon Musk, Tesla Inc.’s charismatic chief executive officer, purchasing another Model ...

SEOUL/DETROIT – Hyundai plans to build a new electric-vehicle manufacturing plant in the United States and has held discussions with officials in Georgia, near existing plants for the Hyundai and Kia brands, people with knowledge of its plans told Reuters. Hyundai Motor confirmed an imminent plan for a new ...

Sschumacher’s first points United Ferrari? Sprint for points Budgets and bouncing Both Mercedes cars crashed at the Austrian Grand Prix on Friday in a dramatic ending to a qualifying session that set the field for Saturday’s sprint. Lewis Hamilton and George Russell walked back to the paddock after separate ...

We hope you never need an armored car to safely run errands, but if you do, Inkas Armored Vehicle Manufacturing is ready to gear a parent up for the school run. The Canadian armorer has just announced its latest, the 300 Series Toyota Land Cruiser. Given VPAM VR7 certification ...

Brabham BT62 shows off at Goodwood