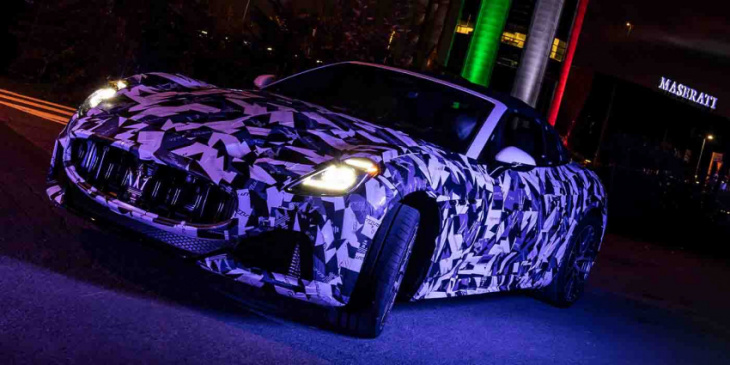 As the public anticipates Maserati’s upcoming Grecale and GranTurismo Folgore BEVs, the Italian luxury automaker is hard at work on a third all-electric model – the GranCabrio. Maserati shared several images of this all-electric convertible prototype today ahead of its official launch sometime next year. Check it out.

Maserati S.p.A. is an Italian automaker that’s been around since WWI but currently operates under the Stellantis umbrella. During a 2020 event, Maserati introduced a new “Folgore” brand of electrified vehicles that would be implemented by 2025.

Originally, Maserati’s definition of “electrified” meant both hybrid and fully electric vehicles, but the Italian automaker pivoted toward Stellantis’ revamped electrification strategy, clarifying that it will offer a BEV version of each of its models by 2025.

As fans of the brand wait for those two initial EVs to arrive in 2023, Maserati has begun teasing its third model – the GranCabrio convertible. Here are a few of the first public images of the prototype.

Our first look at the upcoming Maserati GranCabrio

Maserati hasn’t shared much else about the GranCabrio other than the images of the prototype seen above, but its latest press release does include some additional images in addition to minor details about the development of this all-electric convertible.

According to Maserati, GranCabrio prototypes have begun the initial stages of development and testing through the streets of Modena in Northern Italy. The automaker explained that the intensive testing these prototypes are enduring consists of driving on roads, tracks, and other various usage conditions.

Maserati’s aim in testing the GranCabrio prototypes is to gather as much essential data as possible to optimize the BEV’s fine tuning before segueing into production. Speaking of which, Maserati shared that the official launch of the GranCabrio is expected sometime in 2023.

We are sure to learn more next year as we make room for the Folgore versions of the Grecale and GrandTurismo first. More details are sure to arise.

The first images of the new Maserati GranCabrio prototype

Who Maserati has lined up to replace F1-bound De Vries

Debuting two years before the Daytona at the 1966 Turin Motor Show, Giorgetto Giugiaro’s strikingly beautiful design clearly influenced Pininfarina’s designers. The long bonnet flowing into a sloped roofline fronted by a wide-mouth grille and the prominently displayed trident emblem, the Ghibli was equal parts aggressive and sensual. Svelte and ...

Modified MC20 collides with carbon fibre factory. Comes off second best… Uh oh, it looks like Mansory has got hold of a Maserati MC20. The German tuner has released some renders of its upcoming plans for the V6-engined Italian, and it’s fair to say that it’ll no longer be the ...

Maserati has promised to offer an electric powertrain in every vehicle it sells by as soon as 2025. The transition has already started with the recently revealed 2024 Granturismo which will offer buyers the choice of gas or electric power when it lands at dealerships next spring. Maserati’s new ...


View more: Next Maserati Quattroporte reportedly due in 2024 as pure EV

MILAN: Stellantis sees its future as a niche player in China though its premium brand Jeep and luxury brand Maserati, its chief financial officer said today, as the carmaker rethinks its strategy in the world’s largest market. The group said this week it was closing its joint venture that ...

The 2020-21 Formula E runner-up and a title contender with Venturi last season, Mortara remains with the Monaco-based squad through its rebranding, having been with the team throughout his five-year tenure in the championship. Guenther moves across from the Nissan e.dams squad to partner Mortara, ensuring that Maserati has two ...

Photo / Supplied From the just-because-we-can file: Maserati’s Fuoriserie customisation division has produced an “ultra limited edition” version of the new Grecale SUV themed around the Mattel doll Barbie. Why, oh why? The company says it’s inspired by the “Barbiecore phenomenon” – a worrying trend that involves celebrities dressing ...

Maserati Grecale Modena review: an effective crossover, just not an inspiring one

Maserati GranCabrio Spied For The First Time With V6 Engine

Buy this Maserati MC12 Versione Corse, be the hero at the local track

Maserati MC12 Corse For Sale: Own A Legend

Maserati Gran Turismo to include an electric variant