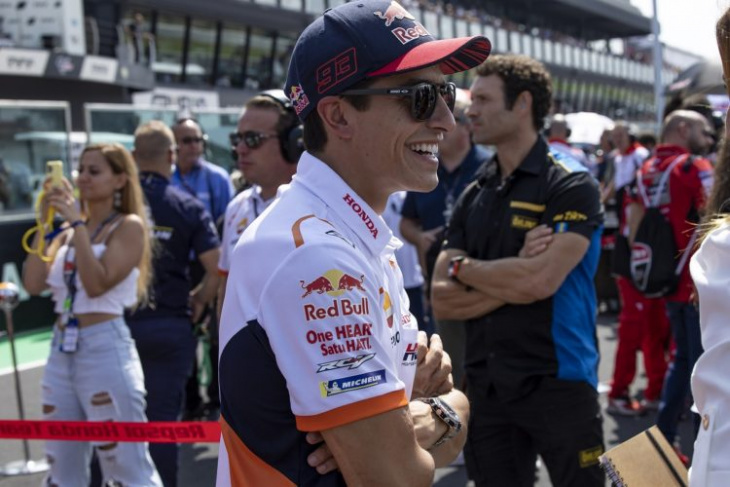 Marc Marquez will make his long-awaited to return to MotoGP competition this weekend for the Aragon Grand Prix, 110 days since his last premier class outing.

The Spaniard has completed several track tests in recent days since being cleared to return to motorcycle training two weeks ago, with his latest at Misano – on the MotoGP-spec RC213-V – giving him and the Japanese manufacturer enough confidence to pencil in his return at Motorland Aragon.

With the injured humerus now fully healed, Marquez has been focussing on re-building his muscular strength with a strict training regime at home in Spain twinned with track tests, a programme that has proved successful and has thus led to him getting the all-clear from his medical team to return to racing.

Honda released a statement on Tuesday afternoon confirming the news, the squad insisting that this weekend Marquez’s objective is to “continue improving Marquez’s bike fitness and assessing his performance during the intensity of a Grand Prix weekend and race” with a view to being fully fit and competitive for the 2023 campaign.

“Having completed a fruitful two-day test in Misano and continued intensive training at home, Marquez and the Repsol Honda Team have set a date for his return: the Aragon Grand Prix,” began Honda’s statement.

“110 days after he last raced a MotoGP machine at the Italian Grand Prix on May 29, Marc Marquez will return to competition at the Aragon Grand Prix.

“Since undergoing a successful fourth operation on his right humerus, the eight-time World Champion has followed the strict guidance of his medical team in order to facilitate a full recovery.

“After numerous check-ups, consultations and tests, all involved are satisfied with the recovery made and the #93 will now take the next step in his rehabilitation – returning to competition.

The objective for the weekend will be to continue improving Marquez’s bike fitness and assessing his performance during the intensity of a Grand Prix weekend and race.

“Born in Cervera, MotorLand Aragon can truly be considered a home circuit for Marquez and the home fans have always helped buoy his on-track performance.”