RADICAL changes to its retail model have failed to make a major dent in the sales of Mercedes-Benz, with the brand’s cars on target to improve on 2021.

The company’s separate vans division, which has not yet made the agency switch as it grapples with alterations to retailing infrastructure and systems, has faltered with a drop in sales so far this year.

Mercedes-Benz Cars Australia started its agency model – where the dealer operates as an agent and among other things, accepts a fixed-price for new-car sales – from January 1 this year.

The move to the agency model has subsequently triggered conversations – sometimes confrontational – between the factory representative in Australia and the remaining Mercedes dealers.

But buyer interest remains strong on the back of new models and the expansion of the Mercedes EV range to now comprise four models – EQA, EQB, EQC and EQS.

Sales to the end of August this year are almost 19,500 units and are estimated to close in on 29,000 for the calendar year, potentially putting Mercedes ahead of 2021, when it recorded 28,348 sales.

The 2022 data shows the mid-size GLC SUVs command most buyer attention, the GLC wagon up 63.9 per cent compared with the same period of 2021 and representing 3381 new owners.

Including the GLC Coupe model adds another 1198 buyers for 4579 sales, meaning combined GLC variant sales are up 42 per cent on 2021 – a strong result given the logistics and component problems in the current market.

In March, Mercedes-Benz Cars Australia issued a statement that said: “Our order intake is currently outstripping supply, as the volume of Mercedes-Benz vehicles arriving in Australia continues to be affected by ongoing semiconductor shortages.”

“On top of this, delays in logistics have held up hundreds of vehicles from customer delivery. New Mercedes-Benz vehicles are currently caught in a bottleneck of port congestion and quarantine inspections at the border, and a number of vessels transporting our cars have been delayed.”

Taking that into account, the brand has battled well. Its GLA-Class – which despite its close design and component link to the A-Class hatch, also falls under the SUV umbrella – also boosted the brand’s numbers with a 15.9 per cent rise on last year and 2468 buyers.

In terms of popularity the GLA was followed by the GLE SUV, with 2461 sales made up of 2001 wagon variants and 461 coupes, both down on 2021 but up on the August monthly data.

The car-maker’s global stalwart, the C-Class passenger car, is its fourth best seller in Australia with 2402 deliveries in the first eight months of 2022.

Although this is down a modest 5.7 per cent on the same period of 2021, its August result is 277.8 per cent up compared with the same month last year – a remarkable outcome and one that reflects the strength of the model and the desire by Mercedes owners to stick with the car format ahead of the weight of attention given to SUVs.

The A-Class is the brand’s fifth best seller with 2035 sales to the end of August, down 29.6 per cent on a year-to-date basis but up on August monthly sales by 14.8 per cent.

Mercedes-Benz’s electric models have hit their straps with the EQC now followed by the EQA, EQS and EQB, all available for sale online.

The cheapest of the EV range is the EQA, starting at $78,513 before on-road costs. Clearly it has found a following with 489 sold in the eight months of this year, up 137.4 per cent on 2021 as stock becomes available and its presence becomes more common on the roads.

New to the market is the EQB, which sold 29 units in August, its first month on the Australian market. Prices start at $87,800 + ORC.

The most expensive of the range at the moment is the EQS sedan – effectively an eclectic S-Class – with a $328,400 + ORC starting price and which found 49 buyers in its debut month of August.

The separate Mercedes-Benz Vans division presents a weaker path than the cars division, with year-to-date sales down by 14.2 per cent with 2823 deliveries to date.

It did make on sale of its all-new electric van, the EQV, with the promise of a future trend in zero-emission city haulage.

The standout by numbers remains the Sprinter large van with 1675 new owners but sales down 20.9 per cent YTD, though the rising star is the V-Class with 368 sales this year, up 61.4 YTD and rising by a huge 646.2 per cent in August compared with the same month of 2021. 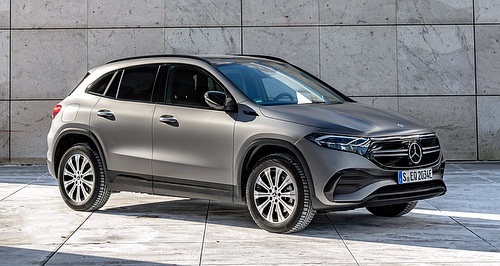