Max Verstappen has been operating on a different level to the rest around Spa this weekend – right from the moment he first took to the track on Friday all the way to his single Q3 lap which stood over 0.6 seconds clear of anyone else’s best.

He and the Red Bull seemed perfectly attuned to the track, the cool conditions – and to each other. The RB18’s direction changes between the fast sweeps and the breathtaking confidence it seemed to give him just spiralled them out of everyone else’s reach. So much so that even his rivals believe he’s favourite for the race despite starting from near the back.

With closest title rival Charles Leclerc also consigned to power unit penalties, the battle for the ‘net pole’, for who would actually start the race from first place, was between the respective second team cars of Red Bull and Ferrari. Carlos Sainz secured it. It was hardly a glorious achievement by the Ferrari driver, but it got the job done. It hinged on two main elements: the slipstream he received from team-mate Leclerc, which Ferrari managed to co-ordinate (albeit not without inadvertently wasting a set of Leclerc’s soft tyres) and by doing a much ballsier job than Perez in the middle sector to go faster there in a Ferrari which by rights should have been slower.

Red Bull showed no apparent interest in using the penalised Verstappen to help Perez in the way that Ferrari had used Leclerc for Sainz’s benefit. There was nothing underhand about it; Perez was simply left to get on with the job of trying to beat Sainz but the team’s focus remained very much on Verstappen who preferred not to use up tyres which may be needed in his charge from the back on Sunday. Hence the single Q3 run, done just to ensure he qualified faster than Leclerc. Hence no tow for Perez at a track where it can be worth around 0.3s. 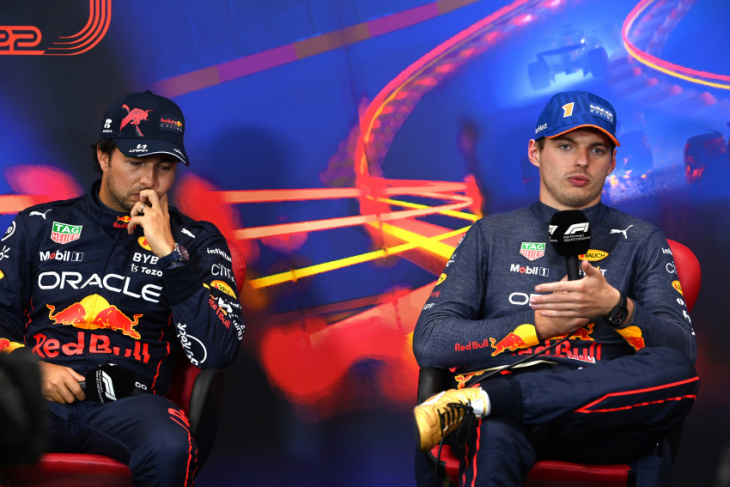 In Red Bull’s position of winning Verstappen this title, the matter of Perez’s race prospects is secondary. Especially because Verstappen’s pace is so strong here – and the track is so favourable to overtaking – that it’s perfectly feasible he can win from the back. Helping Perez could compromise that.

Perez is always careful with his wording but when he feels unsupported, it’s there between the lines. “On my first [Q3] lap I was the lead car with no tow…” Talking of his race prospects, he said: “I really hope I can do my own race. That’s my hope for tomorrow.”

Definite shades there of a reference to Barcelona, where he was asked to ease Verstappen past [twice] after the latter had gone off. It’s an interesting dynamic. The team is happy with him precisely because he’s a back-up who will take points from the competition without threatening its lead driver. He in turn has the most competitive machinery of his career and the opportunity to win races occasionally – which he does. But the partnership does not extend to making him part of the team’s fabric. It’s an inevitable dynamic given Verstappen’s brilliance and long history with the team. But the inevitable chafing around the edges he feels can be discerned in situations like Saturday’s.

How much that less than full support effects his performance is an impossible thing to judge. But since the car has developed away from Perez’s happy place earlier in the season, his pace deficit to Verstappen has ballooned. Here it was 0.632s, with 70% of that shortfall in the fast, demanding corners of Spa’s middle sector, where Verstappen’s ease with a neutral balance around seventh and eighth gear corners was buying him chunks of laptime. Only if it could be driven like that could the Red Bull’s greater downforce than the Ferrari really be fully exploited. As it was, Perez, trying to make his preferred understeer balance work, was shaded by Sainz’s Ferrari, 0.1s slower in a downforce sector than a car running less downforce. 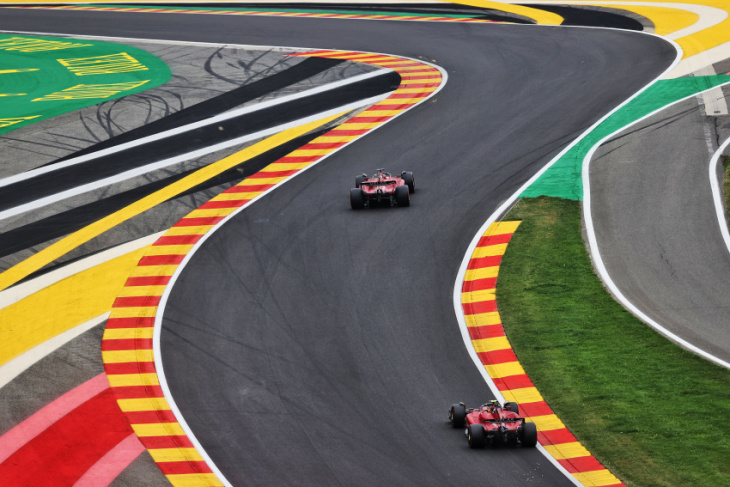 The first Q3 laps for Sainz and Perez were the ones which counted – as, for a variety of reasons, they messed up their second runs. At the end of that first run Perez was told Verstappen’s time (a 1m43.6s compared to his 1m44.3s) and then asked if he wanted to carry more flap for the next run – ie increase the front wing angle for a less understeery balance. There was a long pause before Checo responded: “I cannot carry more flap.”

Sector two was where Sainz’s big ballsy commitment punished Perez’s reluctance to live with a livelier car. He was flat-in-eighth into Pouhon and kept it nailed. The mini-sectors went purple there, eclipsing even Verstappen’s speed. But the Ferrari couldn’t change direction between the long corners in the way Verstappen could make the higher-downforce Red Bull do. Sainz was aggressively hustling the car and just hanging onto the consequences. It was ragged but brave. That lap was 0.165s faster than Perez’s, good enough to start first. 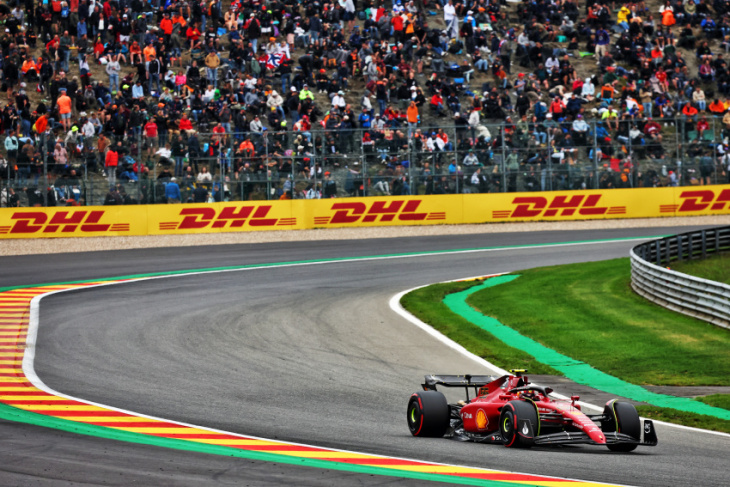 Their second runs were each compromised by the different tyre warm-up demands of the different cars. The Ferrari – with the bigger of its two available wings but still low on downforce – needed a relatively gentle out-lap to keep its rears from overheating. The Red Bull needed a harder out-lap pace. Sainz, at the front of the pack on the second out-lap runs, was preparing his tyres nice and gently, but this was delaying the Alpines of Esteban Ocon and Fernando Alonso (who were trying to get into a towing formation) – as well as Perez. After Ocon powered past him, Sainz sliced across Alonso to maintain his place. Seeing all this, Perez backed off – only to be zapped by George Russell, who then backed off, just as Perez was being told to go, as the tyre temperatures were dropping.

It meant both Sainz and Perez began their laps with less than ideal temperatures. Sainz didn’t get out of Eau Rouge as cleanly as before and dropped 0.2s to his first sector time (he was towed by Leclerc through there both times). Perez didn’t have his fronts up to temperature and slid wide into Les Combes. 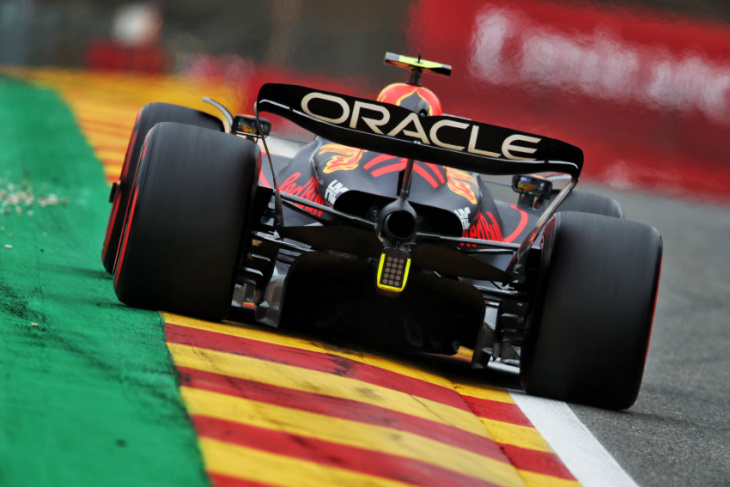 So Sainz starts from pole. Which is historically a tricky place to be starting this race from, so vulnerable to being towed are you. Perez is more than aware that second just might be a better starting slot. If he’s to have any chance of pulling far enough clear of the advancing Verstappen not to receive the dreaded ‘phone call’, he really needs to clear Sainz immediately. He has the faster car. He should be able to do that.

Does Sainz see Perez as the only thing between him and victory? “Not entirely, no – especially with the pace Max has. I think, as soon as there’s either a safety car that can help him close the gap, or even with the pace that he has, that if you translate it into 44 laps, it’s… he can come back, and we’ve seen him do it before.

“hat will not be my focus, obviously, the first and second stint it will be a straight battle with Checo and the Mercedes, if they have the race pace, and we will try and pull away for sure but I wouldn’t discard the two guys at the back making it through.”