Set-up dramas in the garages of Max Verstappen and Charles Leclerc during practice mean that the competitive picture at the Singapore Grand Prix is distinctly cloudy. On paper, things look very promising for Mercedes, with Lewis Hamilton heading the FP1 times and George Russell looking very competitive with Carlos Sainz’s Ferrari on single-lap pace and long runs in FP2.

“It’s perhaps not as good as it looks on paper,” warned Russell. “Verstappen didn’t get a proper lap in and Leclerc was delayed – and I think there is still a lot of track evolution to come.” 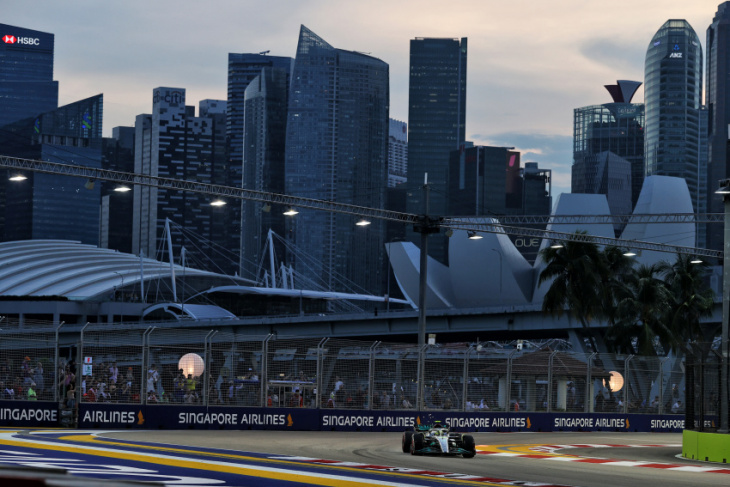 Even though Hamilton’s headed the FP1 times, he was flattered in having done his soft-tyred lap there much later when the track was a lot quicker than when Verstappen had set his time, before a Lance Stroll-induced red flag. In reality, Verstappen looked much the quickest around the humid, bumpy track but still he was dissatisfied with the car’s balance, feeling it insufficiently responsive.

A major set-up change was underway for FP2 and the session was almost halfway through before he took to the track, initially on the hard tyre, with a subsequent push lap on the soft. To his dismay the car felt no better, leaving him and the team with some tricky decisions to make overnight. Team-mate Serio Perez was delayed in the first session by a driveshaft failure and a software problem in FP2, so leaving Red Bull less prepared than usual. 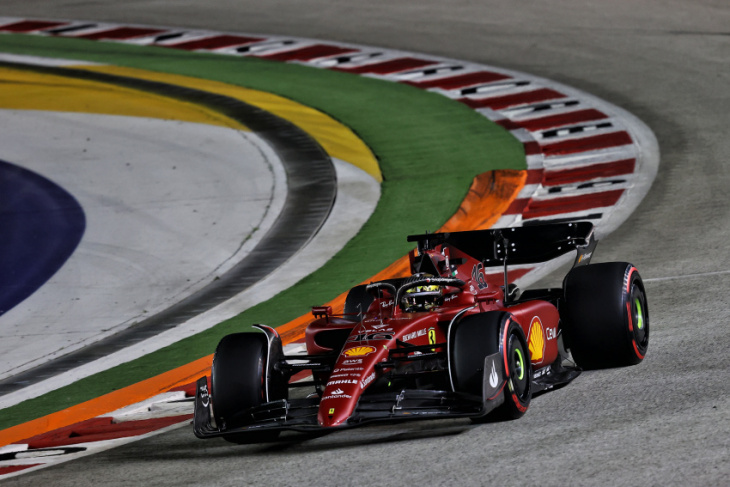 Ferrari was also making changes between sessions, with Leclerc’s car being rebalanced around a lower front ride height than used in FP1. This change was apparently more successful than Verstappen’s but still limited his track time.

On the assumption that Verstappen and Leclerc will each find a big chunk of performance on Saturday, Mercedes’ contained expectations can be understood. “I think we can be fourth/fifth, something like that,” Hamilton said. “Anything more will be a bonus. It started off well but wasn’t as good in the second session. The car doesn’t feel great. It’s bouncing around and I’d say we’re about a second down. There’s not much we can do about the bouncing.”

This is a mechanical trait of the W13 which is locked in and the dumps of the street circuit do not do it any favours. “George found more time from his set-up than mine,” continued Hamilton, “as mine gave me too much locking.”

But while accepting the likely limitations of the car, Russell did feel there could be opportunity here. “The tyres are quite sensitive and I think if we can absolute nail that there could be a huge amount of laptime. With the track evolution we just have to be there at the end of Q3. The new surface is really grippy, it’s a shame the whole circuit wasn’t done.”

Neither Hamilton nor Russell managed to get clear first laps on their new soft tyres, whereas the session-heading Ferrari of Carlos Sainz did. So the deficit at 0.3s is probably exaggerated. The medium-tyred long runs of Russell and Sainz were of the same duration and looked very closely-matched. But matching them both in the long runs was the upgraded Alpine of Esteban Ocon.

Fernando Alonso had looked a close Mercedes match in the first session before a gearbox leak delayed him. The team is quite excited about the performance boost its new floor seems to be bringing and though it would be a surprise if it genuinely was Ferrari-fast, the combination of a driveable, balanced car, Alonso and the Singapore track has the feel of a possible shock.

Because the pitlane loss is so big here, and the tyre deg relatively low, it’s looking like a nailed-on one-stop. The question going into Friday was whether it would be possible to do such a strategy with a soft/hard combination or whether a medium/hard would be necessary. Mercedes, Alpine and Aston Martin all split their long runs between the soft and medium tyres and the suggestion is that although the medium is probably faster over a stint than the soft, the latter is a perfectly feasible starting tyre for a one-stop – particularly given that this race is rarely run at a hard pace. Traditionally it’s a place where the timing of safety cars can have a bigger influence on the result than the outright performance pattern.

Looking between the clouded evidence, Verstappen and Red Bull might be expected to retain their recent performance – but with the Ferraris, Mercedes and maybe even the Alpines in a position to take advantage of anything untoward.