The initial signs suggest the Abu Dhabi Grand Prix season finale is not going to be a repeat of Brazil, where Red Bull being seriously off-form opened the door for Mercedes. Max Verstappen dominated both the long running and the short, though Mercedes was pleasantly surprised at finding it seemed less far off than expected on a circuit theoretically very well suited to the Red Bull’s strong straightline speed.

Despite handing his car over to Red Bull junior driver Liam Lawson in FP1, Verstappen was straight into the groove in the second session where he was over 0.3 seconds clear of George Russell’s Mercedes, albeit running a second set of softs on which he found 0.2s over his first run. The assumption is that Verstappen borrowed the second set from the planned FP3 running on Saturday in order to maximise his running on this tyre on a track more representative of qualifying. 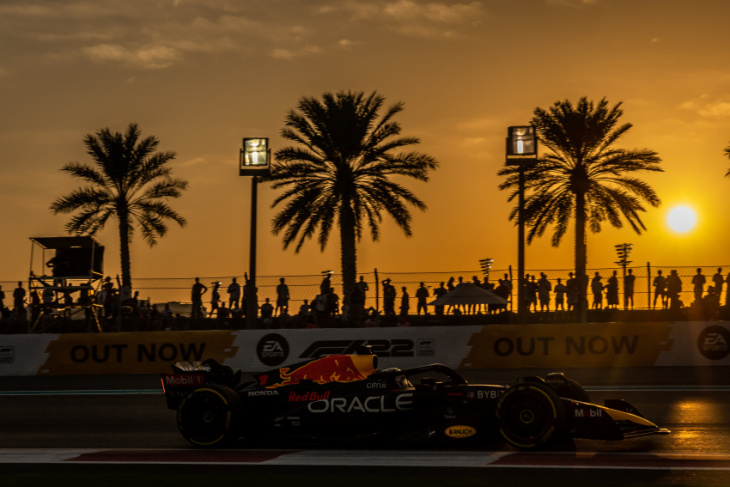 “I’m really happy with how that session went,” Verstappen summarised. “I think the car came together well. Liam did a really good job in FP1, he was calm and steady which is exactly what we needed.

“In FP2 we tried a few things and in the long runs the car was working quite well, so I’m pretty happy with that. Weather-wise, the temperature in FP2 was more representative of what it will be like during qualifying. Of course, we’ll always try to refine a few things overnight, but we should be competitive in quali and the race.”

The first session was held in daylight on a track of 45C. The second, more representative, session in dusk began at 37C and fell steadily. It made for a quicker track but one on which the tyre equation became trickier. In the lower temperatures the soft tyre required a much harder warm-up lap. “It’s like rolling the dice hoping you’ve got them ready,” said Lewis Hamilton, “Sometimes you do, sometimes you don’t. Then in the last sector the rears are too hot.”

Hamilton had headed the times in FP1 but that was without Verstappen’s presence and before Hamilton switched to a lower downforce set-up for FP2. “The car was better in FP1,” he said. “In FP2 the balance was quite a bit off. I’d made some changes between the sessions, not the right ones. So it was a bit of a struggle in FP2, a lot of oversteer; that was my main limitation. We’ll make some changes overnight.” 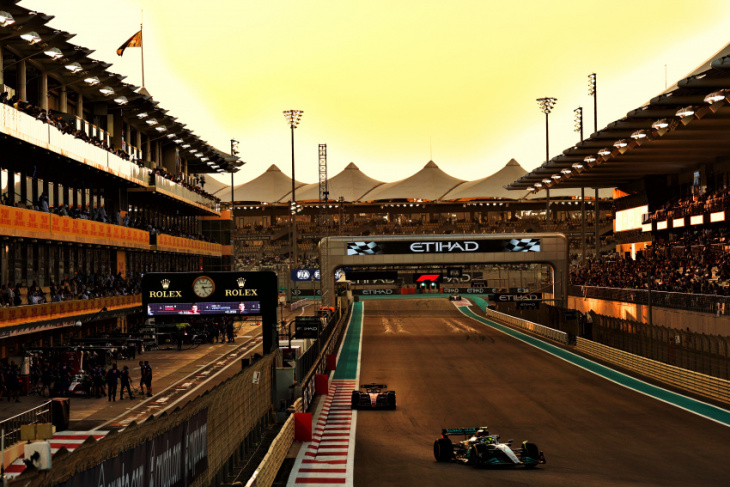 Russell retained the higher-downforce wing throughout and was quite satisfied with progress, though noting that not only was the car not as quick as Verstappen’s over the lap but that the Red Bull seemed to have better tyre deg too.

“It’s really difficult with the tyres over a lap,” he said, “because all the tight corners are in the last sector of the lap so you’re trying to get the right balance to not take too much out the tyre before you get there. Also Red Bull have a very slippery car on the straights so this suits them. But we’re closer, say, than at Spa. I like to think we can fight for the top three in qualifying and who knows where that can take us in the race.” 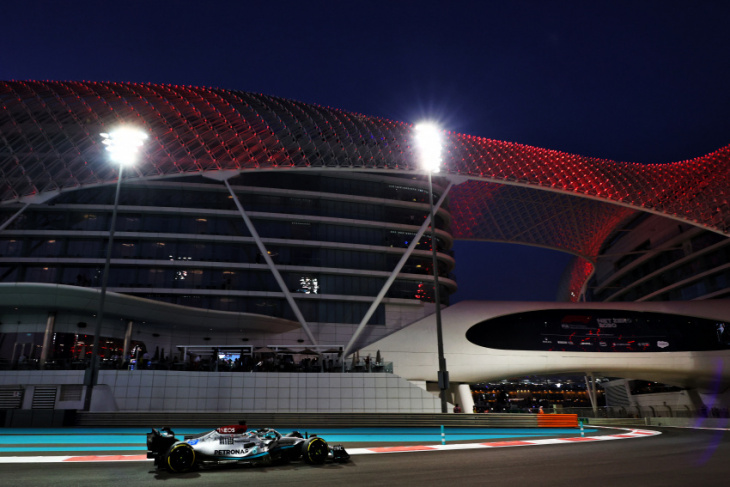 Russell was losing around 0.2s to Verstappen down the straights, Hamilton with his lower wing only around 0.1s but that wasn’t enough to make up for the more oversteery handling balance it brought. Both Mercedes were nudging bouncing territory at high speed and therefore a little compromised through the faster corners of sector one.

Sergio Perez (running a higher downforce wing than Verstappen) was 0.7s off his team-mate in the single-lap runs on the soft and an average of 0.4s off on the mediums in the long runs. A medium/soft combination looks most likely for race day, with it currently quite finely-balanced between a one-stop and a two. That potentially opens up some strategic intrigue and a bit of jeopardy about starting tyre choice.

Ferrari, on Friday’s form, is struggling. Charles Leclerc was within sniffing distance of the Mercedes in FP1 but 0.5s adrift of Russell in the faster, cooler conditions of FP2, and 0.8s off Verstappen. “We struggled a bit with the race pace due to tyre degradation, which was expected,” said Leclerc. “Our qualifying pace was a little better, but our competitors seem to be a step ahead.”

Carlos Sainz handed his car over in the first session to Robert Shwartzman (who lapped just over 0.5s slower than Leclerc) and was 0.3s off Leclerc in the second, though he didn’t get the new tyre lap in and recorded his best lap with the tyre already a couple of laps old.

Best of the rest was Alpine, albeit quite a long way away from the top three. The gap between Sainz and Esteban Ocon was much the same as that between Ocon and the ‘back row’, so the form in this part of the grid looks likely to be as volatile as ever.