Mahindra currently has a very high waiting period of up to 16 months for their SUVs like Scorpio N, XUV700 and Thar 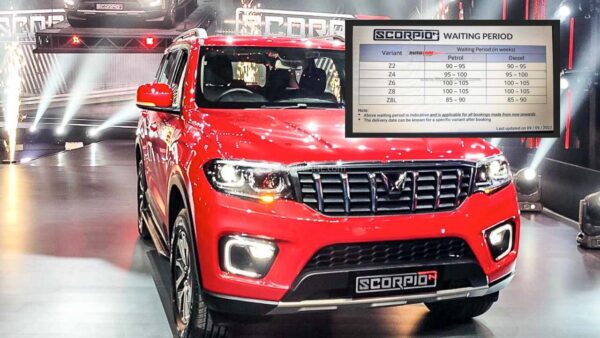 Scorpio N is currently a quick-selling SUV in India with the first 25,000 bookings sold out in under a minute. 1 lakh bookings were recorded in an hour. But the delivery of this entire 1 lakh bookings is likely to take more than a year.

Due to chip shortage, manufacturers have been struggling to keep up with demand. One such manufacturer is Mahindra, which is currently selling some of the hottest vehicles like XUV700 and Scorpio N. The demand is so high, that their waiting periods are no longer in weeks or months, but almost 2 years. As silicon foundries are regaining traction, there have also been positive developments in the auto sector.

Speaking about Scorpio waiting, Mahindra has prioritised deliveries of Z8L trim before others. Z8L customers got the PDI invite before others and are promised delivery around Diwali time. But all those that booked their Scorpio N after the online bookings commenced, have to wait for 85 to 90 weeks (12 to 13 months), irrespective of what engines they choose. 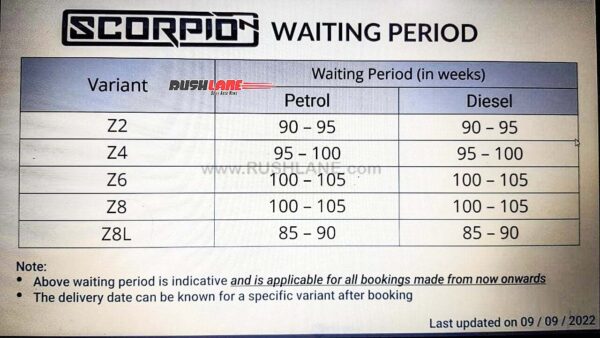 Well, if you want a Scorpio, pronto, Mahindra has got your back in the form of Scorpio Classic. It was launched recently and gets slight upgrades under its bonnet. With a new aluminium block, slightly more fuel efficiency, slightly refined looks, Mahindra Scorpio Classic is a slightly better proposition than the model it replaces.

Scorpio Classic buyers only need to wait for 6 to 8 weeks for their new purchase. Mahindra offers Scorpio Classic in 2 trims S and S11 with only one powertrain option. Both trims have the same waiting period.

XUV700’s top-spec AXL trim had a waiting period of up to 19 months. But now, that has reduced. Other trims have also been cut some slack, and waiting periods have been slashed. Base MX trim along with AX3 and AX5 has 2-3 months of waiting period with petrol engines. While that number is bumped to 10 months for the diesel engine option. However, buyers of AX7 and AX7 L trims should wait for 15 and 16 months respectively, irrespective of the engine they go for. This ain’t outstanding but is better than before by around 3 months’ time.

The fuel indicator on the left was constantly blinking and the level was glaring red. The range, however, was still showing a comfortable 222 km more to go. BHPian IamNikhil recently shared this with other enthusiasts. I had filled about 15 litres of petrol in the evening for a ...

The Roxor is an all-terrain vehicle (ATV) that was developed for the US market. The Mahindra Roxor has been spotted in India for the first time, which suggests that the carmaker could be planning to introduce it in the domestic market. The Roxor was developed by Mahindra Automotive North ...

The whole staff came down and gave us a grand delivery experience. BHPian kushgandhi recently shared this with other enthusiasts. Well, the wait is over for me. The Big Daddy is here. As I previously told, my experience with the dealership Malwa Mahindra has been brilliant. Excellent sales staff ...