Luxury ride: $140M in cocaine and meth shipped from Canada to Australia in vintage Bentley

Police in Australia found large loads of cocaine and meth worth an estimated $140 million hidden inside a vintage Bentley luxury sedan that was shipped from Canada earlier this month.

The mixed load of illicit in-demand street drugs was found stuffed into a regal 1960 Bentley S2 that was placed in a shipping container and sent by sea from Canada. It arrived at Port Botany in Sydney, according to New South Wales Police. 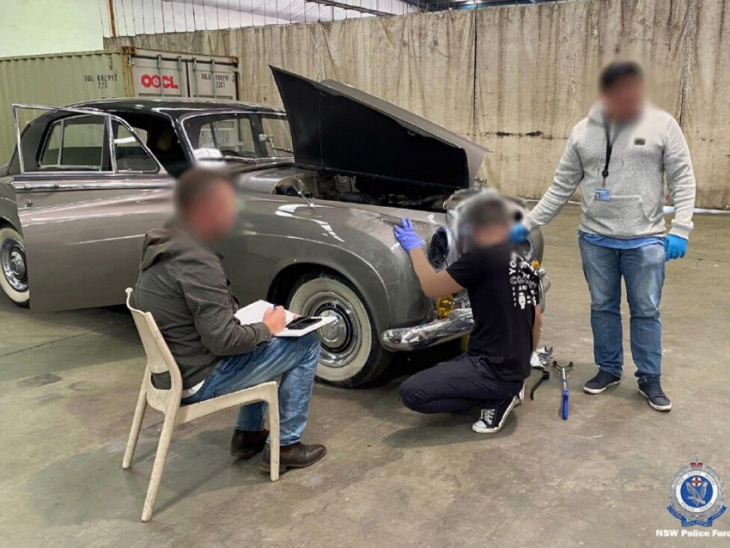 On Thursday, detectives backed by heavily armed members of the riot squad raided a residence in a suburb of Sydney called Rooty Hill. Two men were arrested there, aged 22 and 23.

It appears police removed the drugs, reassembled the car and allowed it to proceed on its journey to be delivered to whomever might be expecting it.

Police photographs of the raid shows the distinctive lines of a metallic silver Bentley in the driveway of a home, under an open car port. The left headlight is partially removed and dangling, and the left front tire is off, with tools scattered around. It seems police waited for someone to start trying to retrieve the load before swooping in.

Two men are shown in handcuffs sitting on the ground beside the car, guarded by police. Officers seized the Bentley and a Ford Focus, along with mobile phones and a computer. Several tools, including an angle grinder, were examined at the scene.

After a subsequent traffic stop on a highway about 740 kilometres north, almost at Brisbane, a third man, 25, who was driving, and a 25-year-old female passenger, were arrested. A search of the Toyota SUV uncovered an additional 2.2 kilograms of meth and about one million dollars in cash hidden under the cargo area, police said. 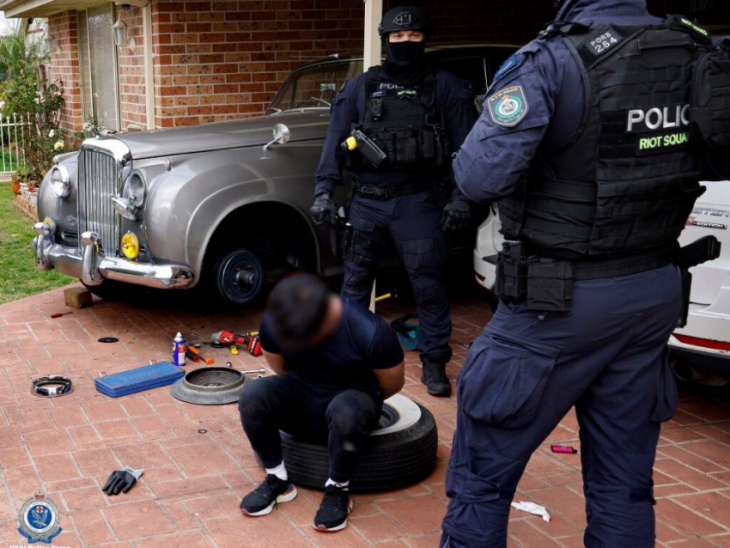 All four suspects were refused bail.

Police estimated the drugs had a combined value of Aus$155 million, which is about C$140 million.

The RCMP could not comment on the case prior to deadline. It is not yet known where in Canada the car was shipped from.

Earlier this week, Australian authorities announced the country’s largest ever seizure of fentanyl, saying it was also shipped from Canada, hidden in an industrial lathe.

That shipment, also by sea, was sent from Vancouver, National Post has learned, and arrived in Melbourne. It also contained more than one kind of illicit drug: 11 kilograms of high-purity fentanyl and 30 kilograms of meth.

There are no arrests in that case and Australian authorities issued a plea to the public for information.

In the fentanyl case, the RCMP would not confirm their involvement, but police sources confirmed to the Post the Mounties were heavily involved in the probe.

“A significant portion of the RCMP’s Federal Policing investigations are focused on Transnational and Serious Organized Crime networks that traffic multiple commodities, within Canada and internationally.”

There have been a glut of Canadians caught trying to profit from the high demand in drug-hungry Australia, where street drug prices are typically much higher than in Canada.

Some have made international headlines.

Earlier this year, two Canadian gangsters from Vancouver were convicted in Australia for running a multi-million-dollar drug smuggling network.

In 2019, Yaroslav Pastukhov, a music editor at Vice Media better known under the name Slava Pastuk, was convicted in Canada after recruiting young musicians, models, and former Vice interns to work as drug mules to smuggle coke on flights to Australia.

Four Canadians and an American recruited by Pastukhov were caught at Sydney airport with nearly 40 kilos of cocaine in their luggage.

In 2018, two Canadian women were caught with suitcases full of cocaine on a cruise ship in Australia. Their trove of glamor photos shared on social media along their luxurious trip sent the story viral.

Keyword: Luxury ride: $140M in cocaine and meth shipped from Canada to Australia in vintage Bentley

Bentley Mulliner Batur: A Fast Car, a Good Car, The Best In Its Class

MACKENZIE: Electrifying Bentley, the 'lowest-risk decision' ever made

Bentley's CEO Opens Up About the Company's Grand, Green Plans

Bentley Previews Design Language Of Its EVs With W12-Powered Batur

What’s that about the Hybrid? Bentley Flying Spur: first details Tell me more… Does it make the Flying Spur faster? What else is new on the Flying Spur? It’s certainly not a shock in the looks department What’s the tech like? Any more tech specs? I want one! Bentlyey ...

After dropping the W-12 engine from the base Flying Spur this May, the new Speed model is the only way to get the 626-hp powertrain without upgrading to the Mulliner.

The stunning coupe gets a bit more useful.

Photo: Bentley Bentley ceased production of the W12-powered Flying Spur in May only to come back with a new, sportier Flying Spur Speed for 2023 that features the same 12-cylinder powerplant. This latest addition effectively completes Bentley’s Speed lineup, which also includes similar versions of the Continental GT and ...

One of the fastest four-door saloons is back, this time with a 207mph top speed

This is the new W12-engined Bentley Flying Spur Speed

Is the Bentley Mulsanne good for new drivers? Here’s our verdict.

Watch: Bentley's luxe apartments have a lift for your car! Zooming with DRIVEN EP101

The Bentley Mulliner Batur is a RM8.7m coachbuilt grand tourer

The Bentley Batur Is a 730-HP, $2 Million Limited-Edition Grand Tourer

Bentley Mulliner Batur Previews The Electric Future Of The Brand

The Bentley Mulliner Batur Points the Way Towards the Future

The Bentley Mulliner Batur is a £1.65m coachbuilt grand tourer

740PS Mulliner Batur is the most powerful Bentley ever

Bentley's "Friendly Takeover" Of Monterey Will Include 103 Cars