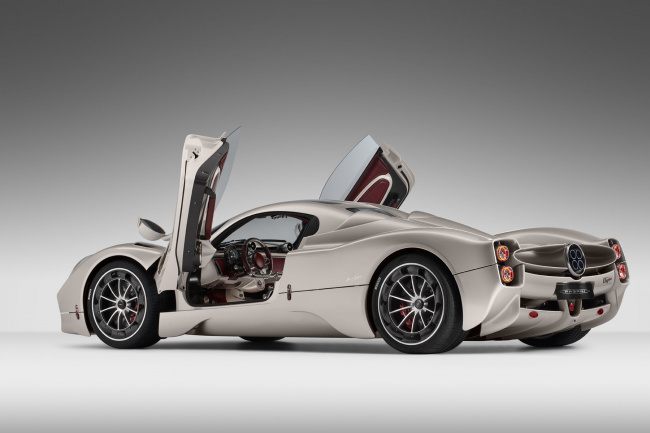 Here are the biggest and most recent luxury-vehicle stories, debuts, and reviews from the past month.

Most anticipated 2023 supercars and bikes 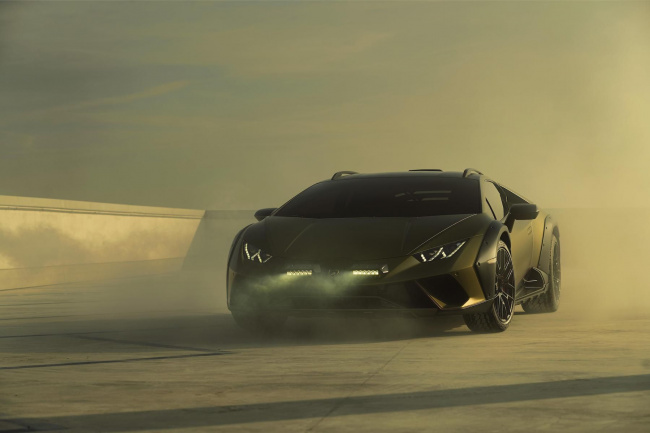 Learn more about the cars

From an 852-horsepower Pagani to a V12 Ferrari SUV to a new KTM racer, there’s plenty of highlight-reel material coming down the supercar pipe this year. Driving columnist David Booth’s list of seven supercars and bikes anticipated to drop (or at least drop more details) in 2023 includes the Pagani Utopia, Ferrari Purosangue, and KTM 990 RC, plus another Ferrari, a Lamborghini, a Maserati, and the MV Agusta Lucky Explorer 9.5 motorcycle.

The most expensive unit is that Pagani, an 852-horsepower V12-motivated supercar with a steering wheel carved from a single block of aluminum. You too can motor like Horatio if you’ve got US$2.19 million.

Lamborghini is also sure to make waves and throw dirt when it opens the pen for the Sterrato, an off-road Huracan with a 610-horsepower V10, 44 mm of added ground clearance, upgraded suspension, and more. Apparently there’s a press trip coming up where drivers will drive the Sterrato in an off-road setting… and I happen to know Booth owes me a favour. 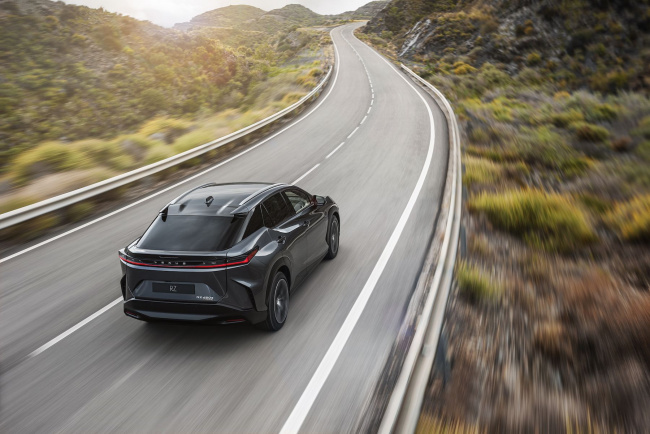 Lexus recently intro’d its first North American battery-electric vehicle, the 2023 RZ 450e, a crossover with an estimated range of 360 km and three available trim levels. As the brand’s pioneer in what it promises to be a BEV-centred future, the RZ uses a new high-output electronic axle that packages together the inverter, transaxle, and motor that adds interior space and aids range. The 301(ish)-horsepower SUV will wear a ‘DIRECT4’ for its all-wheel-drive system said to control front-to-rear drive force ratio between 100:0 and 0:100, and, marking a move away from what was a signature element, a ‘spindle body architecture’ instead of a spindle grille.

The new electric Lexus is scheduled to arrive first in British Columbia and Quebec in Q4 of this year and with price of $64,950 for the Signature trim, $73,950 Luxury Trim, and $80,950 for the Executive trim. More info on all three right here. 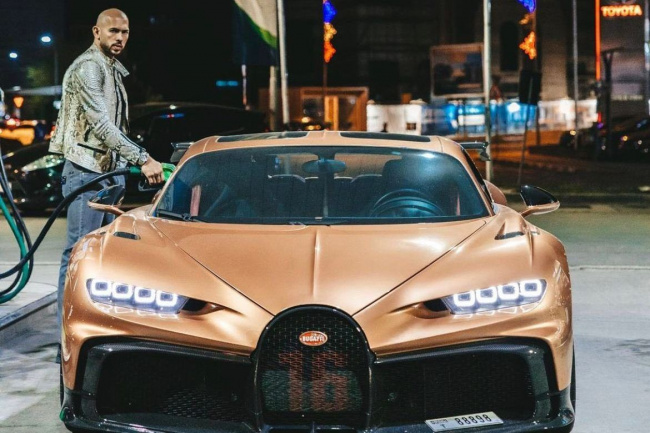 It’s been a bad month for influencer and former kickboxer Andrew Tate, but please don’t feel bad for him. The British TikTok misogynist was picked up in Romania at the end of last month on charges of sex abuse and human trafficking. Since, authorities have been gathering up his assets and putting them under legal lock and key. Among the properties and items confiscated so far include over a dozen rare and valuable vehicles.

Tate’s collection is rumoured to have included a Lamborghini Huracan Spyder, a Mercedes-AMG S63 Coupe, a McLaren 720S, an Aston Martin Vanquish S Ultimate, multiple Ferraris, and a Rolls-Royce Wraith. What remains in his garage, if there’s a garage left, is anyone’s guess, but the Romanian state has so far seized 15 vehicles. It’s believed they even took his prize possession, a multi-million-dollar Bugatti Chiron that was recently featured in a viral Twitter exchange where Tate gets fairly roasted by environmentalist Greta Thunberg. 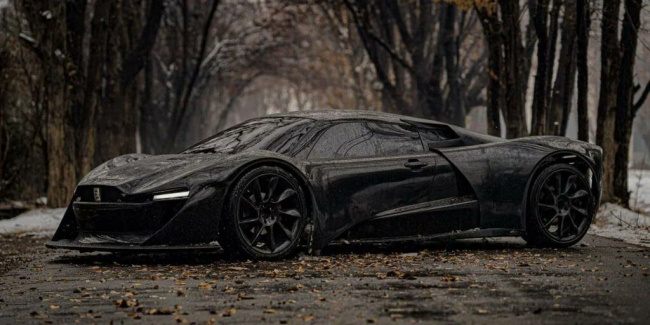 The Mada 9 sports car is an interesting thing. Allegedly, the prototype took more than 30 engineers over five years to design and develop, and apparently it uses a modified engine from a Toyota Corolla. But the most interesting fact about the Mada 9 is its place of origin: Afghanistan.

Announcing the Mada 9’s worldwide debut in December was Taliban party spokesman Zabihullah Mujahid, who took to social media to share images and say what an honour it was for the country. But the lack of actual stats combined with the less-than-stellar reputation of its maker don’t bode well for the Mada 9 making it beyond this vapour-ized prototype form.

Manufacturer ENTOP’s CEO hopes this project will “help to boost Afghanistan’s image on the world stage.” At the risk of dragging politics into the garage, maybe Afghanistan should focus on its humanitarian crisis before investing in supercars. 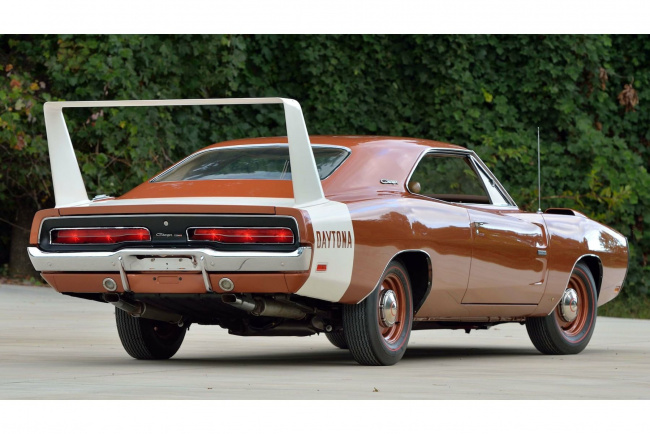 Simply believing that you have a small penis is enough to drive you to lust after powerful sports cars, according to a new study performed by a London university. Researchers set out to test the old wives tale that said boys with powerful toys were compensating for something else, but rather than require any of their subjects to step up to the tape measure, they simply manipulated them with a number of of false facts that led men to believe that they were either better or less well-endowed than average.

Then, when the two groups were presented with images of sports cars and asked to rate their desire, it was those who were disappointed in their stature who more vigorously smashed the Like button. For your convenience, here’s a link to the story to send to that one friend of yours who drives that INSERT MODEL HERE.

Toyota Motor Corporation CEO and president Akio Toyoda is set to step down this April, after being in the driver’s seat of the global automotive giant for 14 years. The 66-year old businessman and grandson of the company’s founder, Kiichiro Toyoda, made the sudden anouncement in the Toyota Times ...

Akio Toyoda, grandson of the car maker’s founder, and one of the most colourful automotive bosses in Japan’s recent history is stepping aside as CEO of Toyota. He will be replaced as president and CEO on April 1, 2023 by Koji Sato, who is currently the head of both Lexus ...


View more: Akio Toyoda steps down as Toyota CEO, to be replaced by Lexus boss

Akio Toyoda shifting to chairman’s role after a decade at the helm as carmaker eyes transition into a “mobility company”.

Bollywood celebrities seen driving or being driven in flashy cars and SUVs is not a new thing. Usually, most celebrities are seen in luxury vehicles from brands like Mercedes-Benz, BMW, Audi and Land Rover. However, a couple of years ago, the cast of the Bollywood movie ‘Sooryavanshi’ broke headlines by ...