That's a significant jump from the earlier run rate of 5-15 vehicles a day; report claims the daily output will soon reach 50-60 cars. 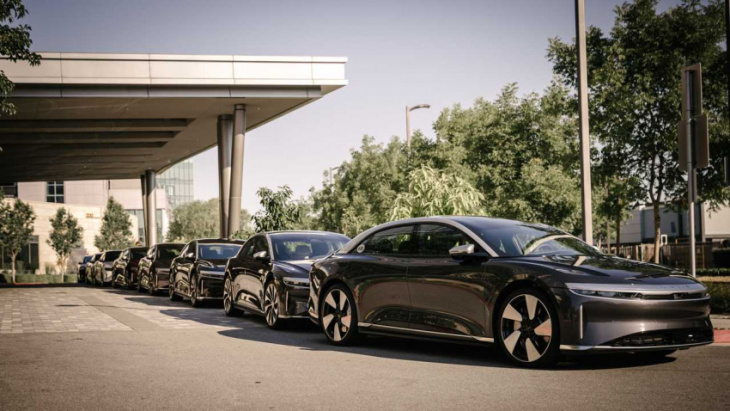 Lucid Group has been having difficulty ramping up manufacturing at its plant in Arizona, and that has forced it to revise the 2022 production forecast twice this year.

While the EV startup originally said it would make over 20,000 Air electric sedans this year, it slashed that target to between 12,000 and 14,000 units in late February. Then last month, Lucid again cut its yearly production target to between 6,000 and 7,000 units.

At the time, CEO Peter Rawlinson blamed the “extraordinary supply chain and logistics challenges” in the second quarter of 2022. However, the executive added that Lucid identified the primary bottlenecks, and was taking “appropriate measures” to fix its manufacturing problem.

It would appear that the solutions have already been implemented, seeing as a report claims that the AMP-1 facility in Casa Grande, Arizona, is now making 40 to 50 cars per day.

According to Wccftech, which cites an “internal source” and also points to a discussion on the Lucid Owners Forum, Lucid Group’s production cadence has more than tripled from an earlier run rate of just 5 to 15 cars daily after major changes to its logistics operations and top management. This means that Lucid can produce around 1,000 EVs every month, assuming 20 working days in a month.

According to the same source, Lucid’s current production run rate is expected to increase further to between 50 and 60 cars per day shortly. This means that the EV startup may be able to meet its own revised production guidance of between 6,000 and 7,000 vehicles in the entire 2022.

The report claims some of the major hurdles that Lucid Group faced in ramping up production included logistics constraints as well as the fact that the production line was divided into disparate cliques instead of working in a cohesive manner.

To tackle these issues, Lucid moved a significant proportion of its logistics operations in-house and made significant managerial restructuring, with at least six key manufacturing executives leaving the company in recent days. We contacted Lucid to verify if the numbers in the report are accurate and learn more about the changes that made the Air production ramp-up possible; we’ll update this space when we hear back from them.

Lucid’s next model after the Air sedan will be the Gravity SUV, but what about after that?


View more: If Lucid Air Coupe Was Real, It Would Probably Look A Lot Like This


View more: Lucid Air Sapphire: Everything We Know So Far

Luxury electric car maker Lucid Motors is looking to beef up its working capital. To accomplish this, the company filed for a new offering of up to $8 billion earlier this week. The funding should help Lucid keep its operations going as it continues to ramp the production and ...

This comes as no surprise since it also appears Lucid is planning a massive expansion at its Arizona factory.


View more: Lucid Will Raise Another $8 Billion Via A New Offering

Lucid Motors added a new executive position within its software team this week and filled it with a former Apple employee with over two decades of experience. Lucid officially appointed Derrick Carty as Vice President of Platform Software Engineering, the company announced yesterday. “In this newly created role, Mr. ...

Lucid previously announced its intent to expand in Casa Grande, and now it has 2,000 acres.

Is a 2022 Lucid Air GT Performance Faster Than a Dodge Charger Jailbreak?

Lucid Air May Be the Most Efficient Electric Car

Despite a 520-Mile Driving Range, the Lucid Air Has Worse Fuel Economy Than 1 EV