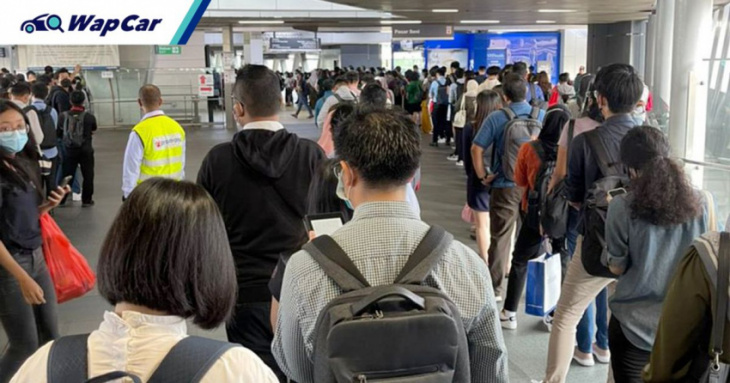 The citizens of Klang Valley are all fired up with yet more complaints about the Light Rail Transit (LRT) system. For the second day in a row, train commuters were faced with long lines at high-traffic train stations and are taking to Twitter to criticise Rapid KL, the train operator, for its poor management of the trains.

Yesterday, various photos of queues leading all the way to the train station entrance started trending on Twitter. According to the captions, the photos were taken at the Pasar Seni LRT station along the Kelana Jaya (KJ) Line.

What is happening to LRT Kelana Jaya line today? So crowded at Pasar Seni station Kindly give rebate @AskRapidKL pic.twitter.com/BAi0aO391Q

One photo also showed auxiliary police officers preventing commuters from going up to the train platform in a bid to control the crowd at the station.

These photos and videos were of course accompanied by angry captions criticising Rapid KL for the 5 to 7-minute intervals causing heavy congestion at train stations and also sardine situations in trains.

One Twitter user also asked for a rebate for the inconveniences the train situation has caused for office workers who relied on the train to get to their workplaces.

With crowds like this in the mornings, your frequency is every FIVE MINUTES??? You have GOT to do better than that @MyRapidKL!!#myrapid#lrt#mrt#kualalumpur pic.twitter.com/SJSFW9DmHR

Rapid KL’s official Twitter account has tried to diffuse the situation by explaining to one user that the auxiliary police were present to make sure the safety of commuters.

However, Twitter users were having none of it as they continue to lambast the operator for not foreseeing the outcome of the long train intervals.

The overcrowded train station issue came just days after a train stalled at KL Sentral station and passengers were forced to evacuate as smoke was seen coming from the stalled train.

Another incident that raised the err of commuters came just weeks ago when the KJ Line suffered from another breakdown and passengers were forced to walk the distance between the train and the station.