What we learned at the Roar Before the 24, ahead of the IMSA WeatherTech SportsCar Series Rolex 24 at Daytona. 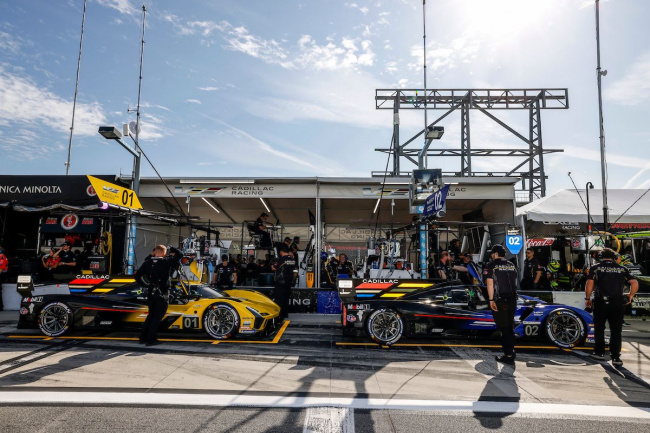 Hope always springs eternal at Daytona after qualifying for the Rolex 24 and before the race.

It’s a new season and everybody’s a winner until the green flag falls. This year, the pre-race spirits are higher than ever after the new GTP class and the five participating factory teams checked some important boxes during the Roar Before the Rolex 24.

Following hundreds of hours of testing, the GTP cars looked fabulous and each of the four factory brands is easily recognizable—as much by different engine sounds (despite the hybrid element) as by their differing aero designs and paint schemes.

“I personally like the sound of our car,” said Chip Ganassi of his team’s Cadillac V-LMDhs, powered by 5.5-liter V8s—the only normally aspirated GTP engine. “I think the V8 says a lot. My first outing with all of the other cars—it’s nice because you know when it’s coming by. I like that.” 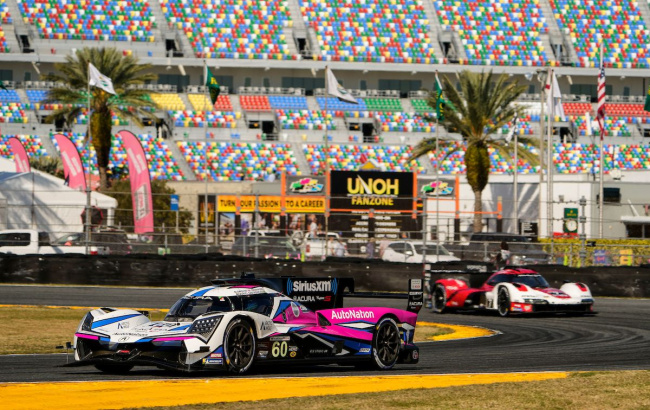 All nine GTPs on the starting grid are within 0.815 seconds, which means the dreaded Balance of Performance is not an issue thus far. Despite being heavier than the preceding DPi cars, pole winner Tom Blomqvist came within 0.346 seconds of the lap record for the Rolex.

But does equal mean boring or artificial?

Strategy choices will play a significant role. Blomqvist won the pole in his Acura ARX-06 on the strength of a decision by Meyer Shank Racing w/Curb Agajanian to have him scrub in a set of Michelins, put on a fresh set and take on a last-minute flyer at the peak time of rubber build-up.

“It was a lick the stamp and send it kind of thing,” said Blomqvist, who had only his “scrub in laps” to guide his scintillating lap. He said that pressure doesn’t seem to bother him. “It might be hereditary, but some things don’t phase me,” said the U.K.-born Swede. 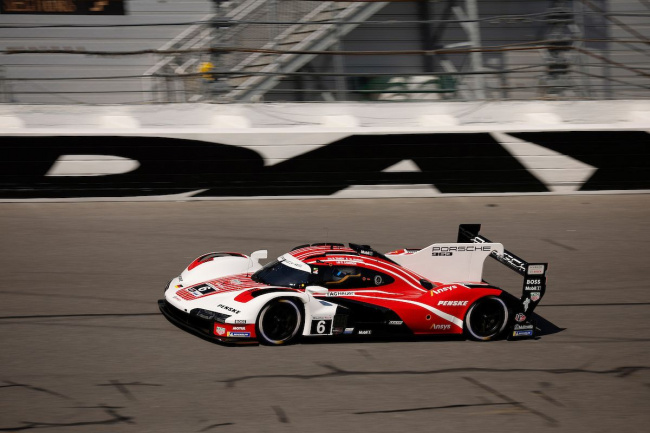 Drivers will make a difference come Saturday and Sunday as proven by Nick Tandy, who had the dubious honor of being the first to crash a GTP in a qualifying session. Just a tick off turning into the Le Mans Chicane, he put his Porsche 963 into the tire wall.

“The lap time was looking very good,” said Tandy, whose teammate at Porsche Penske Motorsports Felipe Nasr qualified second. “It doesn’t look like we’ve done too much damage luckily. It’s not the ideal situation going into a 24 hours race when parts are limited, but the positive is how the team has been operating this week and how fast the car is.”

The hybrids are tricky in no small part due to braking. The front wheels and tires respond to the braking by wire, but the rears respond less to the driver’s foot on the pedal than to the hybrid system. Locking rears were visible in some instances during qualifying and the preceding practice. As with any race car, set-up is key. The Meyer Shank entry was fastest throughout the Roar due to achieving a balanced set-up.

“It reacts to changes,” said Blomqvist of his ARX-06. “It doesn’t do anything weird. You don’t have to do some super unconventional style. It does what you want it to do.” 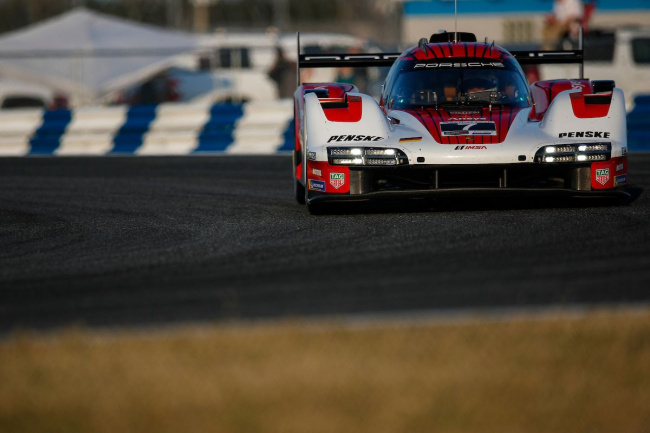 Felipe Nasr is a driver to watch on race day.

Will the GTP achieve the sometimes-elusive formula for endurance racing and create heroic drivers as well as star cars? With last year’s DPi championship and this year’s Rolex pole, as well as his flinty confidence and command of English, Blomqvist is emerging as a top star.

Ricky Taylor, who was third on the grid in his Wayne Taylor Racing with Andretti Autosport Acura, is always fast as well as furiously aggressive under late race conditions. Maybe he’ll have a breakout year and find a season-long rival to highlight his aggressive streak.

Le Mans winner Tandy showed his aggressive streak and then shrugged off an error, a sure sign of swagger. DPi veterans Sebastien Bourdais and Pipo Derani could emerge as major sports car stars with a big season in Cadillacs. Colin Braun was quickly up to speed as Blomqvist’s teammate and is likely to generate some fan interest.

There’s still one caveat for GTP cars—finishing the longer races without breaking. Teams will have separate crews waiting in the garage in case repairs are needed during the Rolex. 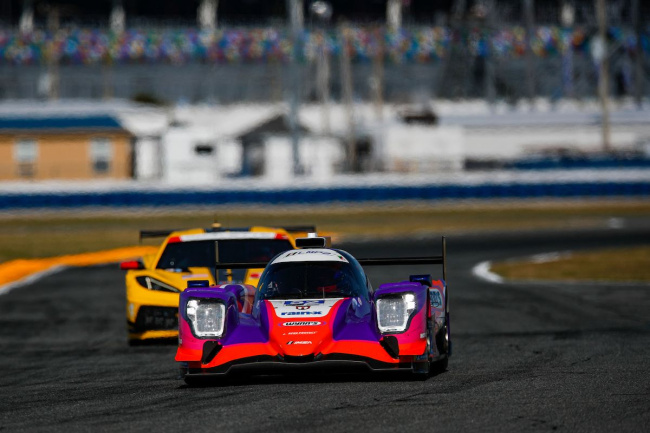 Ben Keating and the Mathiesen Motorsports LMP2 could challenge for overall honors with a few breaks.

If there’s a chance an LMP2 car will win overall, the front-runner is the ORECA of PR1 Mathiesen Motorsports. The team has the hands-down best mandatory bronze driver in Ben Keating, who is paired with a very strong lineup of Nicholas Lapierre (platinum), Paul-Loup Chatin (gold) and Alex Quinn (silver).

Keating won the class pole by a 1.2-second margin, albeit with a tow on the back straight and a red flag shortening the session. Keating described his team’s weekend as a “perfect Roar” in terms of getting all four drivers seat time and the checklist for gathering car data and tweaks. Usually, he said, “Nobody feels like they have enough time in the car, that they really feel like, ‘OK, I’m ready.’”

LMP2 entrant Tower Motorsport believed its team was also well prepared with IndyCar newcomers Josef Newgarden and Scott McGlaughlin, both Rolex rookies. “It’s our race to win,” said Kyffin Simpson, the team’s silver driver. But that was before its bronze driver John Farano found the tire wall at the Le Mans Chicane in qualifying. The incident tore up what had been considered a strong, well-prepared car that had provided ample seat time for its newcomers. McLaughlin said his night practice went great – “Once I figured out how to turn the lights on.”

Newgarden and McLaughlin needed their IndyCar team owner Roger Penske’s permission to race. It is widely perceived they are getting seat time in preparation for a possible seat in the Porsche Penske Motorsports’ GTP cars at the longer endurance races. “I think naturally everyone wants to read into the timing,” said Newgarden. “It was the right opportunity at the right time. The timing worked out this year for Scott and I.” 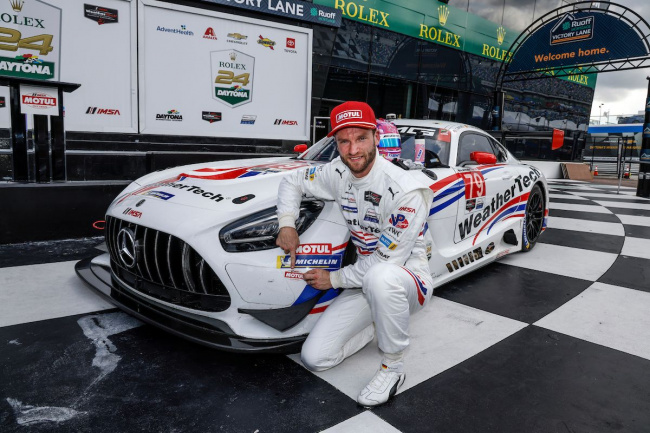 Moro Engel and the WeatherTech Racing team might just be the ones to be in GTD.

BoP adjustments may be made in the GTD ranks, where four Mercedes-AMG GT3s are at the top of the grid, led by three GTD entries followed by the Pro class pole winner Moro Engel, whose WeatherTech Racing team had a fuel leak which cost it practice time.

Engel pointed to the Mercedes-AMG’s longer history and reputation for being “a car that always gives a driver confidence. I’m sure there’s a few competitors who will suddenly find some pace.”

His thoughts were echoed by Mikael Griner, who put the Team Korthoff Motorsports Mercedes-AMG third on the joint grid. “I believe the others are playing a bit, which is a shame,” he said. “But I trust IMSA will make the right decision because we showed what we have.”

Among the competition are the new GT3 cars from Ferrari (296 GT3), Lamborghini (Huracán GT3 EVO 2) and Porsche (911 GT3 R). The Lamborghini of Iron Lynx qualified 14th, best among the newcomers, who appeared to be offering their own take on BoP during qualifying. Go slow, be happy.