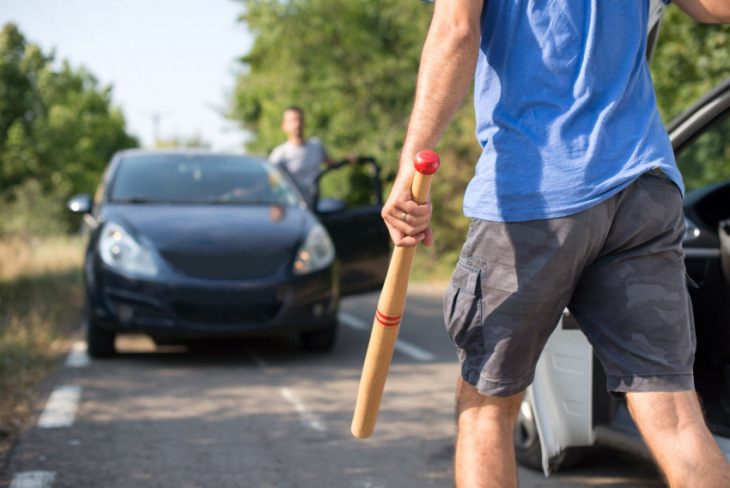 Road rage is not a new idea, unfortunately. As roads get more congested and the pandemic has changed how we use them – and how often – the creme de la crap of drivers are definitely floating to the surface. Stunt driving charges flared in Ontario, with police there attributing it to temporarily emptier roads providing racetrack conditions who those bought too much car and too little brain.

Last week in Manitoba, a reporter with the Winnipeg Free Press retold his encounter: “The driver of that car had been hovering in my blind spot, unwilling to make room for me to change lanes on Pembina Highway. Suddenly, he accelerated at an alarming rate, nearly clipping the rear of my SUV. He passed me on the left and then veered sharply right towards the front end of my car, forcing me to hammer the brakes and the horn at the same time.

“That horn turned out to be a mistake. Now in front of me, he slammed on his brakes, forcing me to do the same. Then he veered back into the left lane and came alongside me, launching a torrent of profanities and challenging me to get out of my vehicle. “Hey, tough guy… you wanna go?”

We punch our horn to warn a squirrel; we toot a quick goodbye to friends as we leave (really unnecessary at 1 a.m., by the way), and we slam our horn when someone is about to step in front of a moving vehicle. Horns have a purpose. I’ve said for years we should each be allotted 100 uses of our horns to use over a lifetime. Think how much more judiciously we would dole them out.

I’d say Winnipeg had the right to find the horn; the aggressor was being an aggressor, and once they’ve laser-sighted you, it’s hard to shake.  It seems the words of tough guys everywhere, “do you wanna go?” has officially entered our driving lexicon. Seems it’s not going anywhere, anytime soon.

The stakes are high and getting higher. Back in May, a Calgary mother-of-five was in the wrong place at the wrong time, a useless platitude that makes exactly nobody feel much better. Police initially thought she got caught up in a road rage incident, but it turned out the driver that hit her as she sat at an intersection was actually intending to lay down some death on someone else. Talal Amer is now wanted on “attempted murder, manslaughter, reckless discharge of a firearm and possession of a prohibited firearm” on Canada-wide warrants. Seems if you’re using your car to kill someone on purpose, you may be on the road, and you may be enraged, but you get your own category.

In Kamloops on August 18, a male and a female driver engaged in the rage on the road but had the good sense to take it to a fast-food restaurant parking lot. There, witnesses reported they were chasing each other around with weapons. “Officers were called to the fast-food restaurant parking lot… at about 1:25 p.m.” Imagine, sitting in the drive-thru, waiting on your #1 with a diet Coke, and watching a jousting match break out beside you. Who gets this mad? Who stays this mad? Who thinks, “Hey, you wanna carry this on at a place that serves kid’s meals?” At this time, it’s unknown what the weapons were, but no charges have been laid as of yet. It’s Canada — I’m betting on hockey sticks; I’m an optimist.

On June 29 in Nipigon, Ontario, two residents of Vernon, B.C., decided engaging in a little road rage with a motorcyclist who’d somehow offended them was a good call. The bike was rammed and then pushed off the road, after which the duo fled at speeds up to 180 km/h. Police blocked off the highway and found them down a side road. They also found and seized “a large quantity of fentanyl, hydromorphone, morphine sulphate, crystal methamphetamine and cocaine. Police also found cell phones, a combat knife and a baton.” The long line of charges — 16 in all including trafficking and possession and, of course, the one that started it all, “Operation of a conveyance in a manner dangerous to the public resulting in bodily harm” — might have been avoided if somebody hadn’t lost their temper. Note: I am not telling those transporting mass amounts of illegal drugs to drive more sedately to evade detection. I don’t think.

A recent Ratesdotca study discovered what we already know. Things are getting worse. 78 per cent of Canadians report seeing road rage, though only 51 per cent admit to engaging in it. Considering this a self-reporting survey, those numbers are pretty stunning.

“Men are more likely than women to engage in confrontational road rage behaviours like obscene gesturing (17% versus 12%), rolling down the window to yell at someone (10% versus 6%), and stopping and exiting the vehicle (4% versus 1%).” Age is a help; 64 per cent of those 18–34 say they engage in road rage, but those over 55 weigh their odds a little better and calm down to seeking roadside justice just 38 per cent of the time. Those numbers are all insane. You are driving death machines capable of killing, especially with a distracted lunatic staring at you instead of the road. There are guns all over the place now. When even something that was previously just rude but innocuous such as flipping someone the bird can now lead to a deadly consequence, it’s not worth engaging, on any level.

Finally, don’t forget the role of bystanders, many with phones in hand. A video filmed in Hamilton, Ontario posted online on July 10 began in the middle of an exchange, “with one man staring into the driver-side window at a driver inside.” Caught on video (of course), the driver tells Mr. Yeller to “get the f–k in your car right now,” to which the man accuses the driver of cutting him off.” As the Yeller heads back, caught on video (of course) “he can be heard calling the driver a n—-r lover.” The driver hears, demands to know what Yeller said about his wife. Yeller walks back and seems to smack the car with his hand.

Stopping, approaching, yelling, throwing slurs, hitting the car. All caught on tape. “Hamilton police previously told CBC while the altercations is a hate incident, nothing that took place was illegal.” The incident has, however, cost Old Yeller his job with Hamilton Health Sciences. You don’t know the dark heart of someone who passes you in a hospital hallway; you also have no idea what rage lurks in the vehicles around you.

We teach our kids to stand up to bullies. On the road, don’t bother. Too many whack-jobs looking for a fight, and often sitting on drugs and weapons. You win if you don’t play.