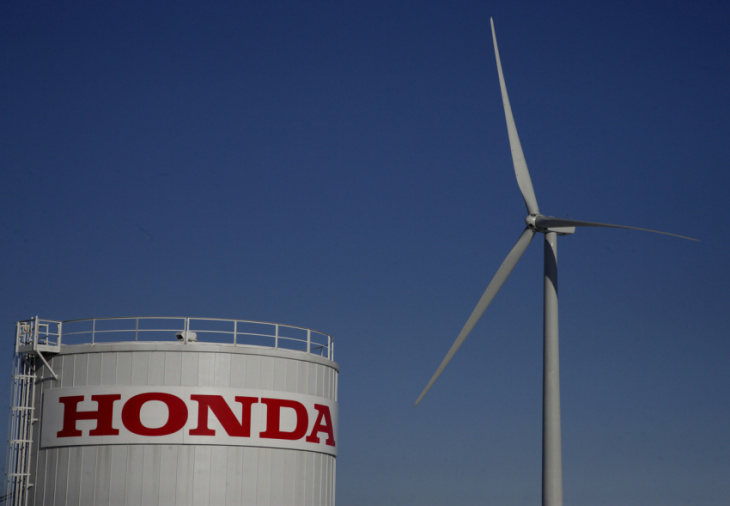 Korea’s LG Energy Solution and Japan’s Honda Motor Co. have announced they will build a lithium-ion battery manufacturing plant in the United States. The collaboration between LG Energy Solution and Honda brings yet another large-scale EV battery manufacturing project to the United States, following CATL and Panasonic, as President Biden’s Inflation Act will now focus on domestically-produced electric vehicles and components.

LG Energy Solution and Honda’s joint venture will see a total investment of $4.4 billion to establish a battery plant with an annual capacity of approximately 40 GWh. For comparison purposes, Tesla’s Gigafactory Nevada, which jointly produces battery cells and packs with Panasonic in Sparks, Nevada, had an annual output of 37 GWh in 2020.

LG Energy Solution and Honda will build pouch-type batteries at the joint venture facility, which could land in Ohio near Honda’s vehicle manufacturing plant. Pouch-type batteries differ from the traditional cylindrical design and are usually lighter weight and more flexible. They are also extremely safe and stable, but due to their design, there is a high possibility of leaking due to puncturing the cell or overheating. The development of pouch cells is usually more expensive than cylindrical cells.

The joint venture will begin to take shape after it is officially established later this year. Meanwhile, the plant’s construction is planned to begin in early 2023. Mass production is set to begin by the end of 2025.

“Our joint venture with Honda, which has significant brand reputation, is yet another milestone in our mid-to-long-term strategy of promoting electrification in the fast-growing North American market. Since our ultimate goal is to earn our valued customers’ trust and respect, we aspire to position ourselves as a leading battery innovator, working with Honda in achieving its core initiatives for electrification, as well as providing sustainable energy solutions to discerning end consumers.”

“Honda is working toward our target to realize carbon neutrality for all products and corporate activities the company is involved in by 2050. Aligned with our longstanding commitment to build products close to the customer, Honda is committed to the local procurement of EV batteries which is a critical component of EVs. This initiative in the U.S. with LGES, the leading global battery manufacturer, will be part of such a Honda approach.”

LG Energy Solution also has joint venture agreements with General Motors, and Hyundai, among others.

How the Inflation Reduction Act has brought EV battery plans to the U.S.

The establishment of the Inflation Act brought on a $430 billion climate, health care, and tax bill that focuses on bringing the transition to EVs closer to home. Vehicles built outside of North America will no longer be eligible for tax credits, the bill said. Electric vehicles offer considerable rebates and tax credits, most often worth $7,500, as long as the manufacturer has not already sold 200,000 electric units, according to current rules. Tesla, General Motors, and, most recently, Toyota have reached the 200,000-vehicle cap.

According to Reuters, around 70 percent of the 72 current EV and plug-in hybrids on the U.S. market would no longer qualify for tax credits under the new rules. This has made those pushing for electrification efforts rethink their strategies as the United States is looking to make major changes in EV market share goals in a short period of time. California has already committed to selling its last new gas-powered vehicle in 2034, with a ban taking effect in 2035.

However, sourcing components and parts for EVs also will become a key factor in whether the vehicle qualifies for EV tax credits. By 2024, EV manufacturers are required to source at least half of their battery components in the United States or an allied country. By 2026, this number has to increase to 80 percent and will ultimately reach 100 percent in 2029, with all battery manufacturing taking place in North America.

These new stipulations have made manufacturers scramble their plans to align with the new Inflation Reduction Act, and will hopefully encourage automakers to make a more accelerated and deliberate change in terms of electrification plans.


View more: The 2023 Acura Integra Borrows the Honda Civic’s Infotainment System (and Is Better for It)

The base variant pays homage to the original Comfortable Runabout Vehicle