A Tesla Model 3 was hit by another driver who had a sticker poking fun at Tesla's "brake failure." Oh, the irony. 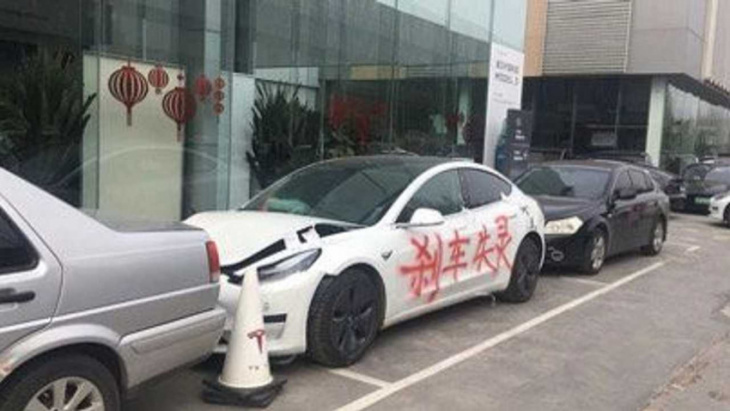 Back in 2021, we published several articles covering an interesting situation that unfolded in China related to Tesla’s “brake failure.” It all started with a protest at the Shanghai Auto Show, but there was much more to the story. In fact, the situation escalated to the point that Tesla had to go after some of the people involved, as well as challenge the media’s coverage.

In short, some people in China were claiming that the reason they crashed their Tesla was that the brakes didn’t work. This scared other owners who then made similar claims. The media picked up the stories, and social media influencers went so far as to make up similar stories that were completely fake. In the end, it was proven that the drivers accidentally pushed the accelerator pedal rather than the brake, and that there were no issues with the brakes in Tesla’s made-in-China models.

Nonetheless, once the reports were out, other drivers and pedestrians were going to great lengths to avoid Tesla vehicles on the road. Some businesses even banned Tesla’s cars from parking lots in the name of keeping people safe. Eventually, Tesla was able to get the media and social media posters to issue public apologies, but there is still talk in China about Tesla’s brake failure, and some people even have related bumper stickers.

As you can see from the video below, which was posted on Twitter by Ray4Tesla and shared by Teslarati, a driver of a green MG6 tried to pass a Tesla Model 3, but it didn’t play out as planned. In fact, the MG6 ended up the victim of a rollover accident.

The even more interesting part here is that the MG6 was wearing a bumper sticker that, according to Ray4Tesla, translates to, “In order to prevent rear-end collision caused by Tesla brake failure, please honor Tesla owners to overtake first.”

Sadly, the Model 3 also has some minor damage. However, the icing on the cake here is that the Tesla was also wearing a bumper sticker. Apparently, Tesla brake failure bumper stickers are popular in China these days …

As the story goes, the bumper sticker on the Model 3 translates to “Brake Failure. I’ve been on the news. Please stay away from me.” If only the MG6 driver would have taken his own advice, and if he forgot about his sticker, the one on the Model 3 offered him a welcome reminder.


View more: ABF lands in Arizona for its first LFP Gigafactory in the U.S.