Lamborghini is taking on Le Mans in 2024, and will do so equipped with eight cylinders… 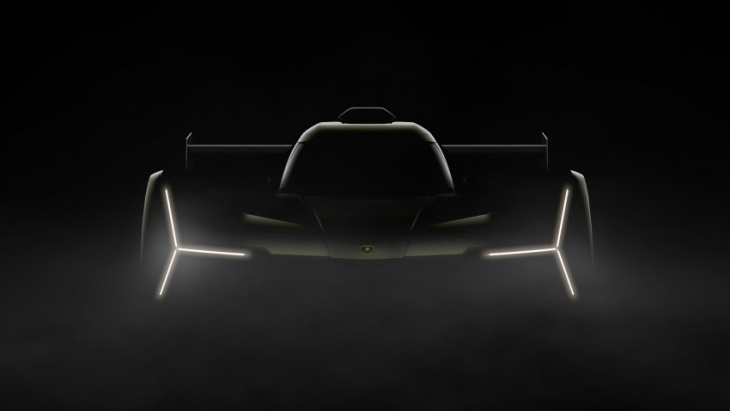 Lamborghini has confirmed that its Le Mans hypercar prototype will be powered by a twin-turbo V8, with a double assault on not one, but two endurance championships in 2024.

Homologated in the LMDh class – which will compete for overall victory at Le Mans alongside LMH challengers in the top-tier Hypercar category – Lambo will line up for a campaign in both the World Endurance Championship and the IMSA WeatherTech Sportscar Championship across the pond.

The shadowy teaser you see above gives little away, other than the headlight signature and the presence of a rear wing. Not following Peugeot’s 9X8 lead, then.

However Lamborghini has now disclosed that it’ll run an eight-cylinder, 90-degree, V-angled twin-turbo (goodness, that’s a lot of hyphens) developed by its motorsport arm, Squadra Corse.

As per the regulations, total power in conjunction with a stock electric motor developed by Bosch comes to 672bhp. Other spec parts include a power management system from Williams Advanced Engineering and a seven-speed gearbox from Xtrac.

Like its competitors Lambo had a choice of four established chassis providers: it’s opted for Ligier on account of its ‘competent and flexible structure’. So there you go.

Anyone else wondering if a V8 feels a bit – what’s the word? – tame for Lambo? We mustn’t forget that hybrid tech is a part of its new strategy whether we like it or not, and according to the company itself that makes the LMDh project ‘the perfect fit’ for its transition to The Future.

Elated or deflated? If it’s the latter, here’s a link to the V10-engined Lamborghini Huracan STO to lift your spirits.

Keyword: Lambo’s Le Mans hypercar will get a twin-turbo V8