The large, three-row model will be Kia's electric flagship stateside. 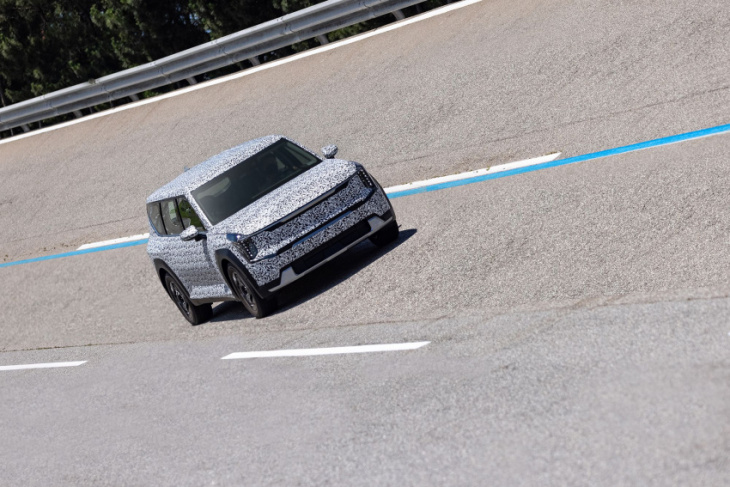 Almost a year ago Kia previewed its electric flagship in Los Angeles, showing off a large and boxy SUV with rhomboid body panels alongside Hyundai’s similarly sized but differently styled Ioniq 7. Kia’s idea of what was essentially an electric Telluride seemed aimed squarely at the US market, though at the time the automaker would only confirm that it was headed to Europe in 2023.

The Kia EV9 is now very much US-bound, and perhaps sooner than you think.

The automaker gave the auto world a glimpse of a working prototype undergoing testing this week, in the most detailed photos yet of its upcoming electric flagship. The latest testing is being carried out at the automaker’s Namyang R&D center in South Korea.

What can we glean from these images?

For starters, the EV9 does not appear to have lost much in the transition from concept to working prototype when it comes to its overall profile, keeping the boxy roof and angular window lines.

Second, the EV9 appears to fully own its role as an electric Telluride, appearing to offer plenty of space inside, enough for three rows of seats. This will make the EV9 a bit of a rarity in the EV field at the moment, as not that many EVs offer three rows of comfortable seating, but some certainly offer an uncomfortable third row. Other all-electric three-row SUVs either available now or coming include Tesla’s Models X and Y, Rivian R1S, Mercedes-Benz EQB and EQS, VinFast VF 9, and battery-electric versions of the Cadillac Escalade and Lincoln Navigator—nearly all of them angling for upmarket buyers. 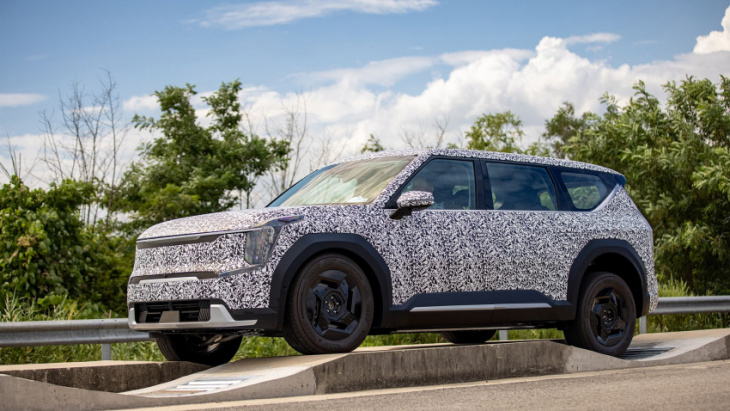 The EV9 should land with a starting price around $50,000, before any incentives, which should make it the largest electric SUV in that price range.

Finally, the EV9 appears to have lost some of the origami-style bodywork seen on the concept—not a big surprise.

“During this final testing phase, the EV9 is relentlessly subjected to a grueling verification program,” the automaker said. “Testing on a 4WD climbing hill and rough terrain tracks, as well as deep-water wading, will ensure maximum reliability even in the most challenging conditions. Kia’s high-speed, handling, and low-friction tracks place every element of the EV9’s performance and roadholding under the strictest scrutiny.”

The EV9 will share the E-GMP platform with a number of other Kia and Hyundai electric models when it arrives in 2023, and is expected to offer a dual-motor layout as standard. Kia has previously hinted that the EV9 will serve up 300 miles of range in addition to 350-kW charging, which could well be a close estimate when equipped with the largest battery.

The EV9 is expected to land on sale stateside in the second half of 2023, with a starting price around $50,000. If it sticks close to that predicted price on arrival, it could be the largest EV you could buy in that price range by a pretty wide margin.

The facelifted electric Kia Soul model will start from £32,795 with an additional trim level and a smaller battery option joining the range

Kia has revised its all-electric small SUV, adding a new powertrain and changing the exterior design

I have driven on almost all terrains so far with as much as 7 full grown adults and weekend luggage and found no power issues whatsoever with the diesel auto. BHPian guru_to_be recently shared this with other enthusiasts. Hi all, Would like to post a quick few review points ...