Kia has methodically changed its demeanor over the last few years to include sportier sedans to rival pricier European competitors. The most noteworthy of Kia’s performance pugilists is the Stinger, a liftback sports sedan with Audis and BMWs in its sights. However, the K5, especially the GT, is a sibling with similar sports acumen. So, is the Kia K5 GT up to the Stinger GT-Line’s standards?

Is Kia K5 same as Stinger?

While the Kia K5 and Stinger are both four-door cars with sports acumen. However, they are very different cars. The K5’s range-topping option is the K5 GT, an inline-four-powered sporty take on the sensible sedan. However, the Stinger’s range-topper is the venerable GT2, a 3.3L V6-powered sports sedan with an impressive 368 horsepower. Instead, the K5 GT and the Stinger’s entry-level GT-Line are more comparable. 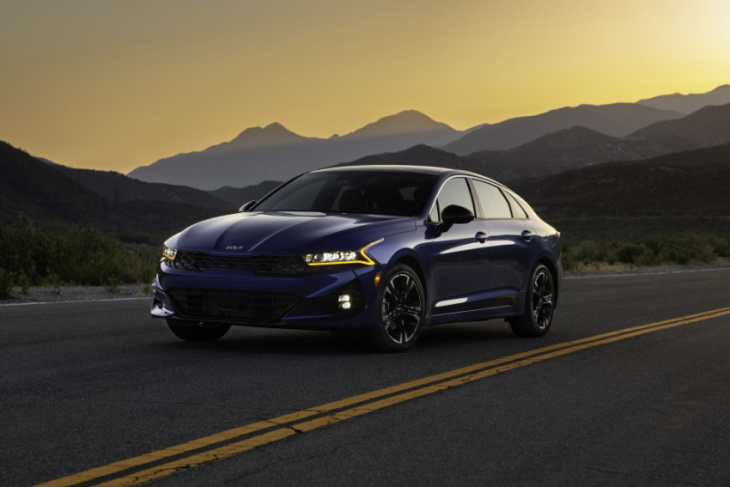 Both cars pack a 2.5L turbocharged inline four-cylinder engine, yet their horsepower figures differ. The K5 GT produces 290 horsepower, while the Stinger GT-Line has an extra 10 ponies from the same displacement. Moreover, the K5 gets slightly better fuel economy than the Stinger; the K5 gets 24 mpg city compared to the Stinger’s 22. Both cars get around 32 mpg at highway speeds.

How much does a Kia K5 cost?

The range-topping Kia K5 GT starts at around $32,585. However, lower trims are much cheaper. For instance, the entry-level K5 LXS starts at about $26,185. Of course, lower trims forgo the mightier 2.5L turbocharged mill for a more economical 1.6L engine.

Compared to the entry-level Stinger, even the K5 GT is a cheaper option. TrueCar says the 2023 Kia Stinger GT-Line starts at $37,735. However, the K5 GT offers many of the same features as the Stinger GT2, like a surround-view camera and 10.25-inch touchscreen.

Does Kia Stinger GT-Line have AWD?

The Kia Stinger GT-Line offers optional all-wheel drive (AWD) for potential owners who want to handle inclement weather in their Kia sports sedan. Moreover, the range-topping GT2 also has the option of power to all four corners. The Kia K5 has an AWD option, but only at one trim.

Specifically, the Kia K5 GT-Line has the grippy option. Unfortunately, the top-of-the-line K5 GT goes without the benefit of AWD. 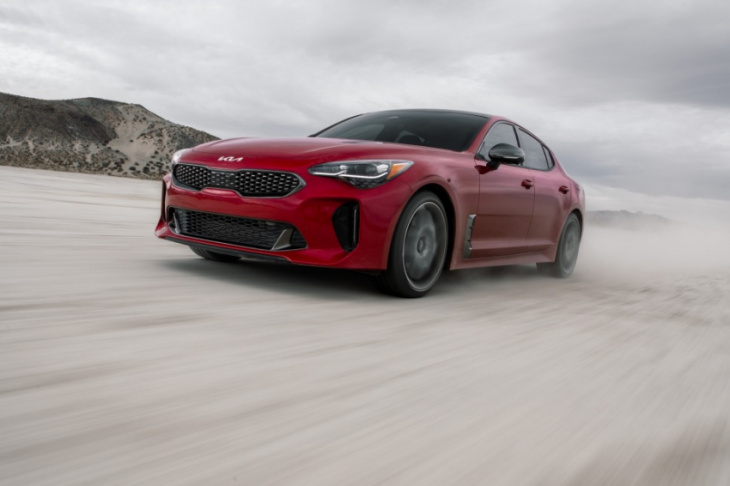 The Kia K5 has a 2022 Top Safety Pick+ from the Insurance Institute for Highway Safety (IIHS). It received “Good” ratings in every crashworthiness category and high scores in crash prevention tests. However, the K5 isn’t the only one; the larger Stinger also earned the IIHS Top Safety Pick+ rating. Add grippy AWD, and the K5 GT-Line and Stinger are sure-footed and safe sedans.

The Kia Stinger GT-Line is more powerful, pricier, and offers AWD. Instead, the Kia K5 GT doesn’t offer AWD, but it’s comparable safe, cheaper, and nearly as powerful as the entry-level Stinger. Of course, the K5 doesn’t have the overt sports sedan demeanor of the Stinger.

Keyword: Kia K5 vs. Stinger GT-Line: The Kia Kids Are at It Again

The winners of the 2023 North American Car, Truck and Utility Vehicle of the Year (NACTOY) Awards were announced today with gold medals going to the Acura Integra, Ford F-150 Lightning and Kia EV6. These three vehicles were selected from 47 eligible vehicles, boiled down to 26 semifinalists and, ...