Kia EV9: Everything we know so far

If someone told us a decade ago that Kia would be a leader in the electric vehicle market, we would rightly have raised an eyebrow. If we’d been told it had a car capable of out-performing a Porsche, and will soon release a full-size SUV to rival the Range Rover, we might have dismissed it right off the bat.

But that’s where we are. The switch from internal combustion to electrification has re-written the automotive rule book, and some manufacturers have adapted more quickly to the new normal than others. Kia has the Porsche-baiting Kia EV6 GT, a performance-tuned variant of the best electric car, as well upcoming EV9, making the automaker one of the early non-Tesla success stories.

The EV9 was first revealed in concept form at the 2021 Los Angeles Auto Show, and is due to arrive in production-ready guise in the first quarter of 2023. The car was already well underway when the concept was revealed, and so we shouldn’t have too long to wait. Here’s everything we know about the Kia EV9. 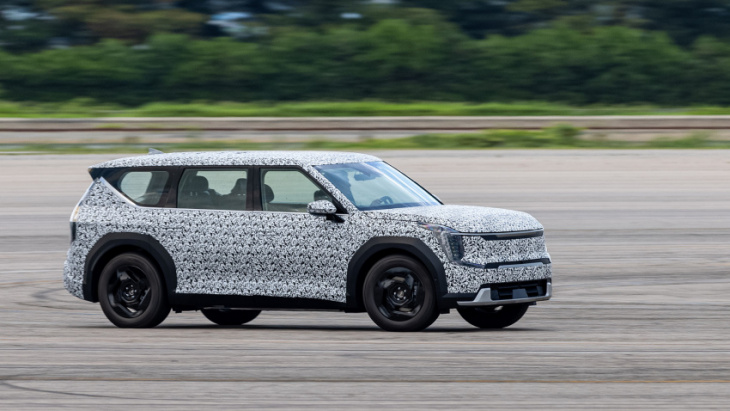 Kia hasn’t said what the EV9 will cost. But given the vehicle’s size, its three rows of seating, and the EV6 GT’s circa-$60,000 price tag, we expect the EV9 to land slightly above that mark.

This means it probably won’t quite carry the six-figure price tag of a Range Rover, but it is surely set to be Kia’s most expensive car to date. It’ll also likely end up being its largest outside of the U.S. and with the potential to lure buyers out of cars from premium brands like Mercedes and Tesla.

There are very few electric SUVs with a third row of seats, and of those so equipped – the Tesla Model X, Mercedes EQB and upcoming Rivian R1S – none are expected to compete with the Kia on price.

As for a release date, Kia says a production version of the EV9 Concept will be revealed early in 2023, with deliveries to start later in the year. 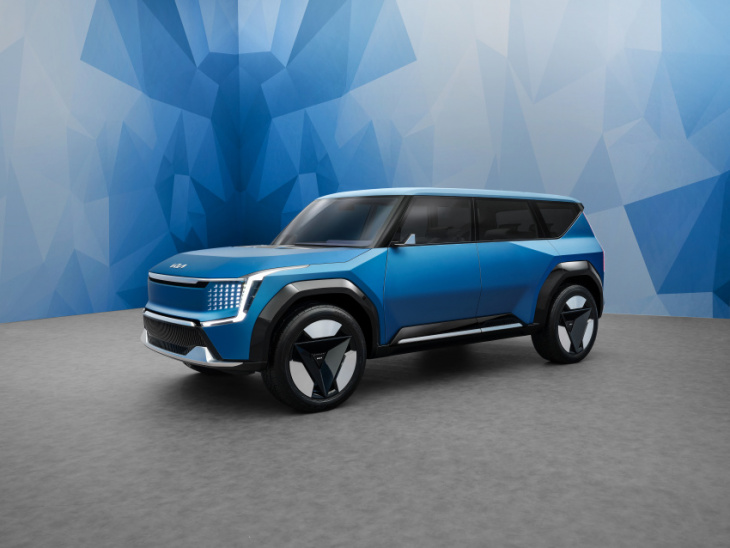 Kia hasn’t given any specifics here yet, but says the EV9 will use the same E-GMP (Electric Global Modular Platform) as the EV6. This will mean an 800V system architecture and rapid charging of up to 350 kW, when connected to an equally fast charger.

The current generation of E-GMP, as used by the Kia EV6, Hyundai IONIQ 5 and Genesis GV60, offers a maximum battery size of 77.4 kWh, but in recognizing the demands of future large sedans and SUVs, the company says it is developing “large-capacity batteries of 100 kWh or more.”

Range figures for the EV9 haven’t been revealed just yet, but the Hyundai Motor Group, which includes Kia and Genesis, as well as Hyundai, says: “Some notable features [of the E-GMP] are a multi-charging system that supports both 800V high-speed charging and 400V fast-charging, a generous driving range of 500 km or more on an 18-minute change, and the V2L (vehicle to load) feature, which allows external devices to use the vehicle battery as a source of power.”

For some context, the EV6 has a range of up to 328 miles. If the EV9 uses the same 77.4 kWh battery, then we can expect to see a slightly shorter range from the larger and less aerodynamic EV9. Or, if a 100 kWh pack ends up being used, range could exceed 350 miles. 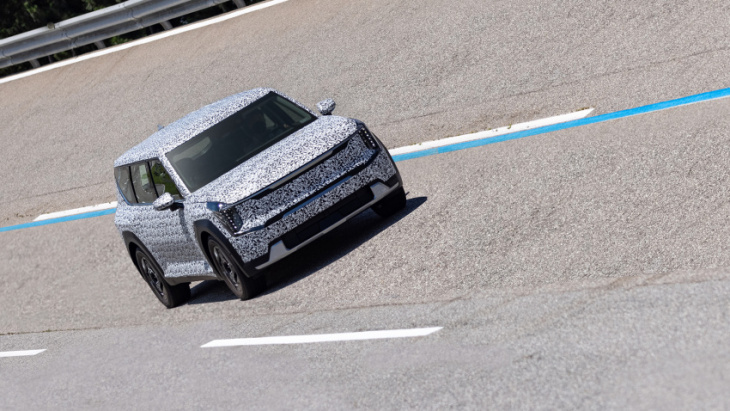 Kia hasn’t released any performance statistics just yet. We can safely assume the car will have a motor on each axle for all-wheel-drive, and a relatively sprightly 0-60 mph sprint time of 5.0 seconds is expected. A lesser model with a single motor driving the rear wheels might also be available, with a longer range and lower price.

It will be interesting to see whether Kia offers much in the way of off-roading technology with the EV9, or if it mirrors the EV6 and adds a GT suffix to its electric SUV. Without that badge, it seems unlikely that the EV9 will be as powerful as the near-600 horsepower EV6 GT. 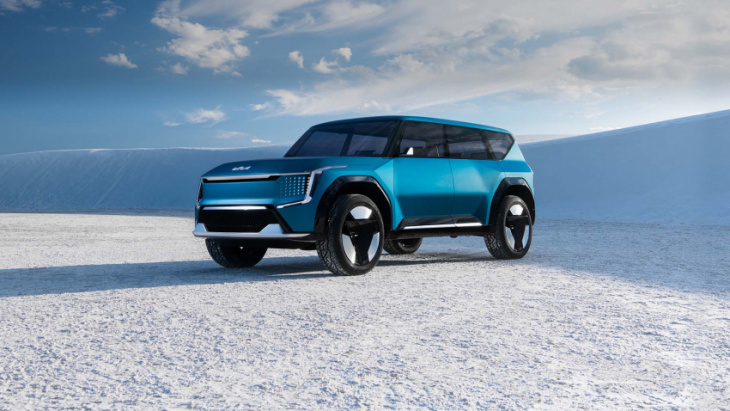 Big and boxy. That’s the EV9 Concept in a nutshell, but as ever it’s tricky to say how much of this car’s design will remain when the production version arrives. Images of camouflaged prototypes testing suggest the big Kia will indeed look a lot like the concept, complete with the brand’s ‘tiger face’ frontal design. 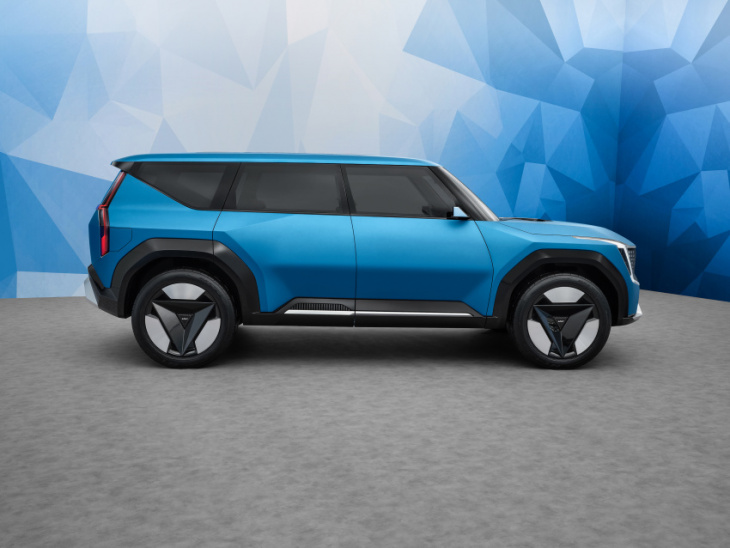 An interesting feature of the EV9 Concept is how a solar panel is fitted to the hood. Kia hasn’t said what effect this might have on charging the battery, or how much extra range could be created on a sunny day. It also hasn’t said whether the feature will appear on the production version of the EV9.

Another fun piece of design is the rear doors, which are rear-hinged and therefore open backwards, like those of a Rolls-Royce or the new Ferrari Purosangue SUV. It’s unlikely that these doors will make the production version for safety and practicality reasons, but they’d sure look great if they did.

Compared to other members of the Kia family, the EV9 is larger than the Sorento SUV but slightly shorter than the Telluride, the largest Kia sold in the U.S. 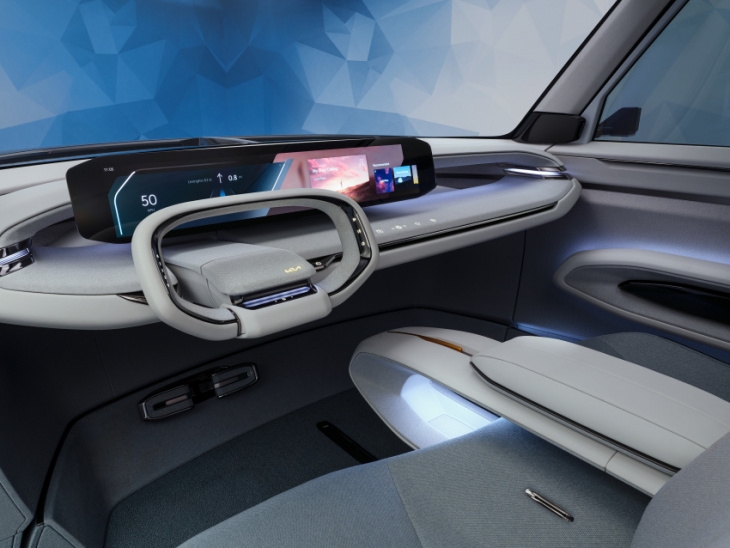 When it comes to concept cars, the interior is where manufacturers like to show off. This is especially true of the Kia EV9 Concept, which has a huge, 27-inch display on the dashboard, mood lighting pretty much everywhere, and a pop-out steering wheel that hints at an autonomous future where a car’s manual controls fold away when they aren’t needed.

Naturally, very little of this is likely to appear on the production-ready EV9. We hope the cabin’s minimalist styling remains, and we’re always fans of tasteful ambient lighting. But we suspect the massive display will shrink a little, and the steering wheel will be swapped out for something more conventional. 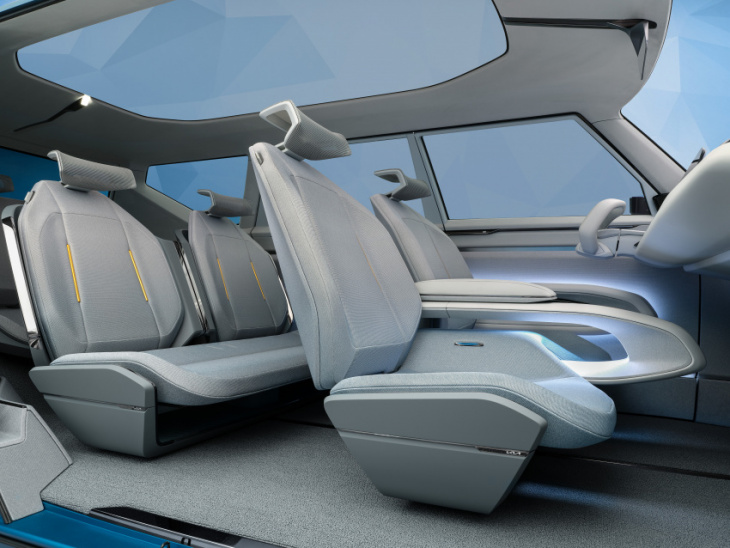 The seats, and especially their head rests, are also likely to change, while the full-length panoramic glass roof will hopefully remain. We also hope the interior’s strong sense of light, space and airiness makes it to production. We’re interested to see how much space the third row of seats will offer — and most importantly, how much of the trunk they will occupy.

Kia says the EV9 will be the first car to feature its Automode semi-autonomous driving system. The car will also benefit from an internet connection for over-the-air software updates, and a feature-on-demand (FoD) system for when drivers want to pay to add new software functions after the car has been delivered. 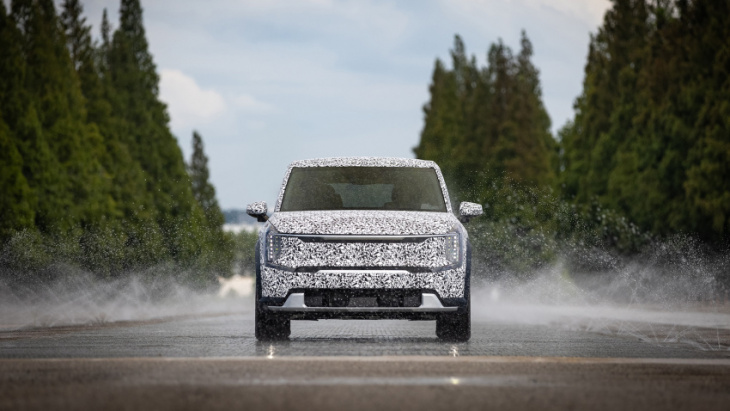 Although the concept was only revealed last year, we’ve now only a few months to wait until the production-ready EV9 is upon us. We’re very interested to see how much of the design has changed to make the concept a reality, and what it’ll cost. Will Kia really aim for Range Rover and Mercedes, or will the EV9 offer something different by combining the space and practicality of a full-size SUV at a far more attainable price?

Offering the EV9 with a third row of seats is a good idea, and a move that should help separate it from some of its competitors. This turns the Kia into what could be an enticing EV for families who want the most space possible, good range and rapid charging at a competitive price.

Keyword: Kia EV9: Everything we know so far