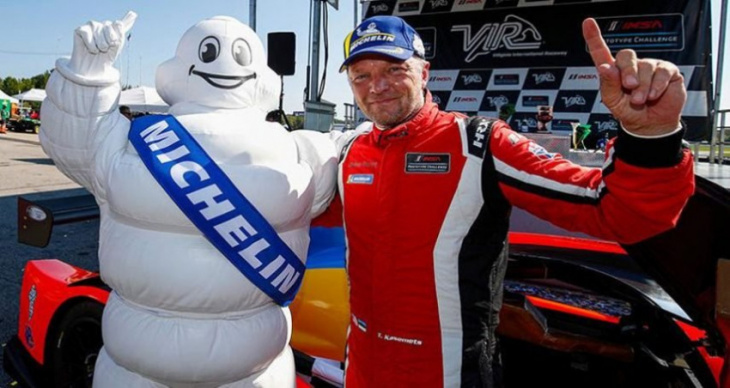 ALTON, Va. — There’s no low gear for Tonis Kasemets inside a race car, and he showed it again Sunday when he dominated the IMSA Prototype Challenge race at VIRginia International Raceway.

Kasemets led wire-to-wire in the No. 60 Wulver Racing Ligier JS P320 to collect his third win in four outings this year. The victory also increased Kasemets’ points lead to 140 with only the season finale on Sept. 30 at Michelin Raceway Road Atlanta remaining.

“I have only one pace,” Kasemets said in victory lane. “If you go slow, you make mistakes, so you’ve got to just go all out.”

Starting from the pole position earned in Saturday qualifying, Kasemets opened a six-second lead a third of the way into the 90-minute race. Yet he still kept pushing, turning the first race lap under 1 minute, 43 seconds on lap 19.

After the field bunched following the only full-course caution of the race, Kasemets burst away on the restart with 16 minutes to go. After establishing a comfortable lead again, he proceeded to turn his two fastest laps of the race on the 44th and 45th times around.

He took the checkered flag one lap later, 9.56 seconds ahead of Alex Koreiba in the No. 23 AL Autosport with JDC MotorSports Duqueine D08.

Kasemets gave full credit to the Wulver crew that repaired the Ligier after he slid off track and into a tire barrier during practice on Friday.

“We had a little oopsy on Friday, our first day,” he said. “The team rebounded, we did a good qualifying, strategy was perfect. This team is mega, they do all their homework, no corners cut. It’s a testament to the boys. We’ve been together for a long, long, long time. This is unbelievable.”

Koreiba, who shared the No. 23 Duqueine with Memo Gidley, was handicapped on the final restart with six lapped cars between him and Kasemets. Battling for position with Corey Lewis, the two cars touched, with Lewis suffering a cut right-rear tire.

“I go to the inside, Corey splits the traffic, we go side-by-side into (turn) one,” Koreiba explained. “I’m all the way to the right-hand side of the racetrack and he squeezes me. Where am I supposed to go at that point in time, right? Unfortunately, he cut a tire. I obviously wasn’t aiming to do something like that.”

Despite the 140-point deficit with just one race remaining, Gidley said there’s no give up in the No. 23 team.

The mission at Michelin Raceway is simple.

“Just be as fast as we can,” Gidley said. “We want to win Road Atlanta. You never know what happens in racing.”