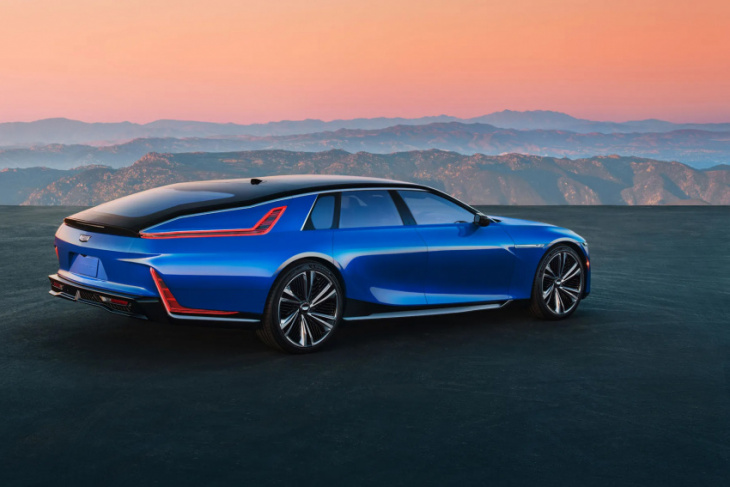 When the Cadillac Celestiq was officially shown for the first time earlier this week, a combination of factors turned the internet on its ear. Wild styling, an opulent interior, and the sky-high price of this all-electric Rolls-Royce competitor caused plenty of digital ink to be spilled — both positive and negative.

It is always entertaining to gather a yaffle of public opinion, especially when it is on a vehicle as polarizing as the Celestiq.

After all, this isn’t GM’s first foray into trying its hand at some sort of halo car for Cadillac, though not all prior efforts were met with roaring success. With that in mind, we donned our Postmedia hazmat suits (standard company-issue) and waded into the morass that is internet comments.

The term “American Veyron” must surely please suits in the corner office.

Finally! An American car worthy of PR-mandated hyperbole. I look forward to one day meeting this American Veyron. https://t.co/bMQ2Ra5t10

This user makes a good point, musing about the sales process for a vehicle which costs more than some homes. Even if the Celestiq won’t be cheek-to-jowl with a Silverado, it will inevitably share some space with Escalades and Blackwings. There has been some suggestion, of course, that not all Cadillac dealers will earn the privilege of selling this six-figure EV.

Can Cadillac find a way to deliver a dealership experience that someone with Celestiq-level money expects? They can’t allow this thing to be sold at Big Bob’s Chevy/GMC/Cadillac, right? Next to all those Malibus?

Joking suggestions of the consumption of illicit substances abounded, such as this reaction. Hey — at least it is a positive reaction.

Man I love it when car companies do something bonkers. The Cadillac Celestiq – a huge, crazily styled, hand built luxury Rolls-rivalling EV that will cost over $300,000. Whatever the Caddy execs are smoking, I want some! pic.twitter.com/dvqAMhL6D4

While this writer doesn’t particularly agree with the mention of an ’01 Buick, he will certainly take any reference to Star Trek — particularly a polarizing episode of Voyager.

The $300k Cadillac Celestiq looks like a Star Trek transporter accident that merged a 1971 Jensen Interceptor and a 2001 Buick Century into one strange, unsettling entity. The Tuvix of cars. pic.twitter.com/THBHqMiOyn

More than one person chose to have a bit of fun with Cadillac’s past.

Of course, it is always telling (and entertaining) to read reactions from readers hanging out at websites which are not car-centric. After all, it is not impossible for gearheads to be rather insulated from a wider swath of opinions from folks who don’t know – or care – the difference between a lug nut and a alternator. Over at a tech(ish) site called The Verge, their readers offered up feedback of their own.

“If it wasn’t for the fastback/sportback/whatever rear and the bizarre color choice, it’s not a bad looking car land yacht,” opined one. User whatisakafka said “You’ll definitely have collectors who will buy them just because they’re gonna be rare, but this car is more about building their reputation, not resting on their existing reputation.” Fair enough.

But the most interesting statement from this non-car website belonged to a user called BrodyC. “An industry paradigm shift, such as this presents an opportunity for all brands to reinvent themselves. There will be new leaders and failures that we didn’t think possible,” they said. “It’s interesting to see it all play out.”

The person then went on to say they feel Cadillac’s EV design language is more appealing to them than that of Mercedes, though it’ll take more to change their mainstream perception of Cadillac. “But,” they qualify, “it looks like they’re at least going for it.”

And going for it indeed. Setting an opening bid of US$300,000 places Cadillac squarely in the ultra-high-stakes game — both in terms of expectation and reputation. Be sure to sound off with reactions of your own in our comments section below.

Cadillac Models & History 1972 DeVille: The standard equipment for the DeVille included all that were found on the Calais plus rocker panel moldings, rear center arm rest and twin rear cigar lighters. Of course, the rocker panel trim helped in identifying the cars, but there were also new DeVille ...


View more: The Meaning Behind the Cadillac Logo Has Never Changed

Cadillac Fleetwood Models & History 1990 All of the new or improved features introduced for the 1990 deVilles were also found on the Fleetwood Cadillacs. The elite cloth used for the 1989 Fleetwood seats was replaced by a new “Ardmore” material. The Fleetwood’s standard aluminum lace wheels different slightly ...

Deville Cadillac Models & History 1960 Modelsin the DeVille sub-series were trimmed much like 6200s, but there was no bar medallion on the front fenders and special script nameplates appeared on the rear fenders. Standard equipment included all base model features plus power windows and Two-Way power seat. Interiors were ...

Don’t count on the MSRP The 2023 Cadillac Escalade is selling over MSRP Should you skip the Cadillac Escalade? Prices for cars are on the rise, but consumers are still out there. The MSRP can give you an idea of how much you should be spending, but don’t count ...


View more: Avoid the 2023 Cadillac Escalade if You Want a Good Deal on a New Car Right Now

$300K Cadillac Celestiq, the brand’s second EV, is already sold out for at least a year