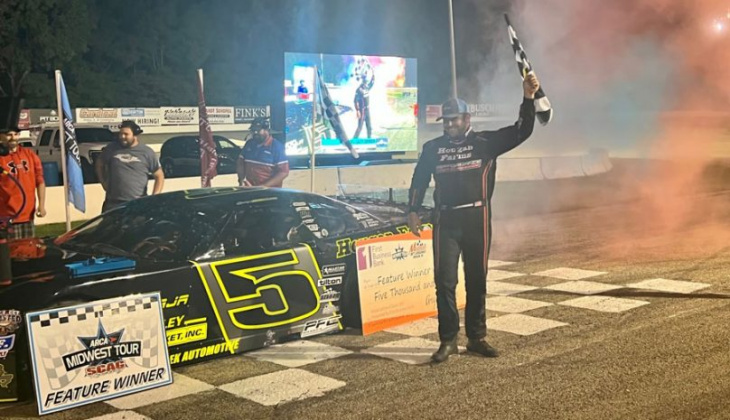 MADISON, Wis. — Casey Johnson was given a challenge by ARCA Midwest Tour Promoter Gregg McKarns earlier in the week.

The challenge for Johnson, who won the Joe Shear Classic at Madison International Speedway in May, would be for him to win the second Midwest Tour event at Wisconsin’s Fastest Half-Mile Oval.

And if he did, McKarns would give the two-time champion a $5,000 bonus on top of the $5,000 prize to the winner of the Howie Lettow Classic presented by First Business Bank on Friday night.

The Edgerton, Wis., driver lived up to the challenge by passing five-time Tour champion and NASCAR Camping World Truck Series playoff contender Ty Majeski with eight laps to go, pulling away to a $10,000 payday.

“I knew in that long run, I wasn’t going to run him (Majeski) down, so I just ran my pace where I knew I wasn’t hurting the tires hoping for a late caution,” Johnson said after the race. “One showed up and it was time to burn them down.”

The caution came with 13 laps to go after Levon Van Der Geest spun in turn two.

Majeski had a comfortable lead over Johnson and the rest of the field, appearing that he was driving off to another victory.

On the restart, Majeski chose the outside with Johnson in the inside. Johnson would hang on to that inside lane as the two battled side-by-side for five laps until Johnson got ahead of Majeski to pull away to a 1.245 second victory.

Behind Johnson, Austin Nason was able to get by Majeski for second with six laps to go and secure the second spot.

“We struggled all day, we thought it was just the car but when we got in the heat race, we noticed were were lacking some motor,” Nason said. “We made the car as good as we could, and it was really good. I couldn’t ask for a better car. This is our only bullet left, we finished second and it gives us good momentum for next week.”

Majeski wasn’t sure what happened at the end.

“I don’t know if I was too aggressive or how I managed the race. I was riding real heavily while I was leading, thought I was managing a decent gap,” Majeski explained. “I don’t know. Not sure if we had a slow leak in a tire, we will just have to go back and look at it. Overall, it was a strong run, car had a lot of speed, we just got beat at the end.”

For the second year in a row, Johnson was able to drive to victory lane for car owner Travis Dassow, who had the legendary crew chief as his mentor back when he competed in ASA Late Model Series.

“This pretty cool. Last year, we said he was riding with us, and this year I think he really was, cause we weren’t expecting this one,”Dassow said with a smile in victory lane. “I had a lot of fun times with Howie. It sucks he is gone. He taught me a ton and it makes it pretty cool to win this race twice.”

Catch a replay at midwesttour.tv.