Indications are that 7-time NASCAR Cup champion will return to Chip Ganassi Racing IndyCar seat in 2023. 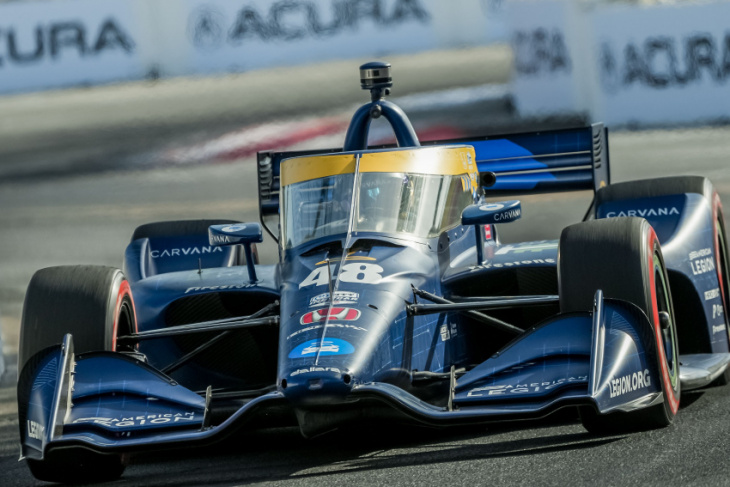 The obvious question is where does Johnson, who turns 47 on September 17, go from here?

No one really knows, although indications are there that the seven-time NASCAR Cup champion will return to Chip Ganassi Racing for a third season and second full campaign in 2023. 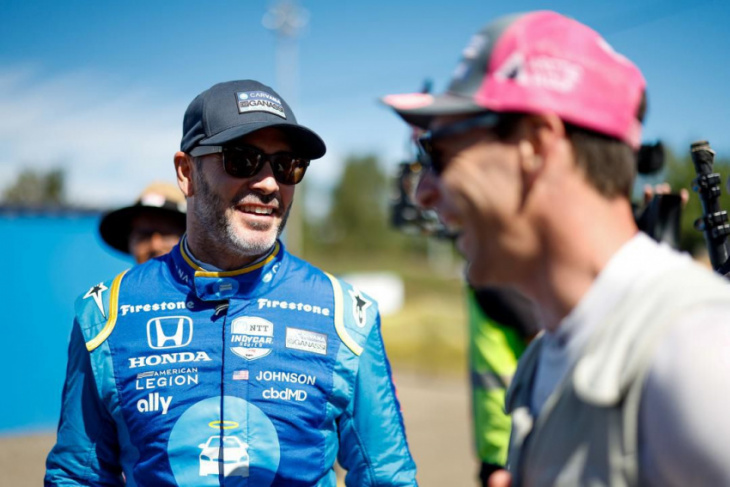 Johnson says that he enjoyed the IndyCar season, despite the fact he finished just 21st in the points standings.

Johnson left California after the race for eight days in England and returns to the U.S. on Sept. 20. But before he left, he gave a brief analysis of how he performed both in the 17-race campaign, as well as specifically in the season-ending Firestone Grand Prix of Monterey at WeatherTech Raceway Laguna Seca.

“I wish that I had a little more pace in some circumstances on some tracks. But that’s part of this journey I’m on and it’s really been a fun one.”

As for Laguna Seca, Johnson considers it one of his favorite race tracks. His 16th-place finish tied his fifth-best showing in an IndyCar race in his brief to-date open-wheel racing career.

“I love this racetrack,” Johnson said. “I’m so happy to finish on a high note. That was probably the most competitive I’ve been on a road course and passing cars and racing hard. We had some issues at the start of the race, and I had to drop back like 10 or 15 seconds after contact with the No. 4 car, and then to fight back from that and end up in 16th.

“It really was just a great day and great way to finish up the season.”

Earlier in the Laguna Seca weekend, Johnson said he expects Carvana to return as his primary sponsor—be it whether he returns as a full- or part-time competitor. Carvana has had financial and legal struggles this year, but Johnson express confidence in the company and its continued backing of his racing exploits.

“They see such a high value in being a part of the IndyCar Series, the cars I’m driving and the series I’m involved with, that ultimately whatever path I choose to have in 2023, they’ll support me,” Johnson said.

Johnson was asked what the phrase “whatever path” meant, whether it means he could revert back to a part-time schedule that would allow him to potentially race in other series such as IMSA, WEC or maybe even a one-off in NASCAR.

“I wish I had more to share, but I don’t,” Johnson said. “I do have this news in September vs. December of last year (when it was finally announced Carvana would sponsor him for the full 2022 season).

“My typical journey, especially in IndyCar, the season finishes and I take the time to figure out what I really want to do and explore the options I have in front of me and then make a decision.

“I feel very good to have this news (Carvana’s support for 2023), what I provide, what my past racing provides, what the series is about and that they’re willing to support a full IndyCar schedule, if that’s what I choose to do. Now it’s time to go home, really look inside myself, figure out what my options are and make a decision.”

“I need to think about it, see what Team Johnson (his family) thinks…”

“The whole process just take time. I need to think about it, see what Team Johnson (his family) thinks and talk to the girls (his wife and two daughters), but the good news is Carvana, they want to stay.”

It’s should considered no coincidence that NASCAR is sending a Le Mans entry to France in 2023. That project is being headed by Johnson’s former NASCAR boss at Hendrick Motorsports.

NASCAR and Hendrick Motorsports could do worse than have Jimmie Johnson as an ambassador driving a Next Gen Chevy Camaro in France come next June.