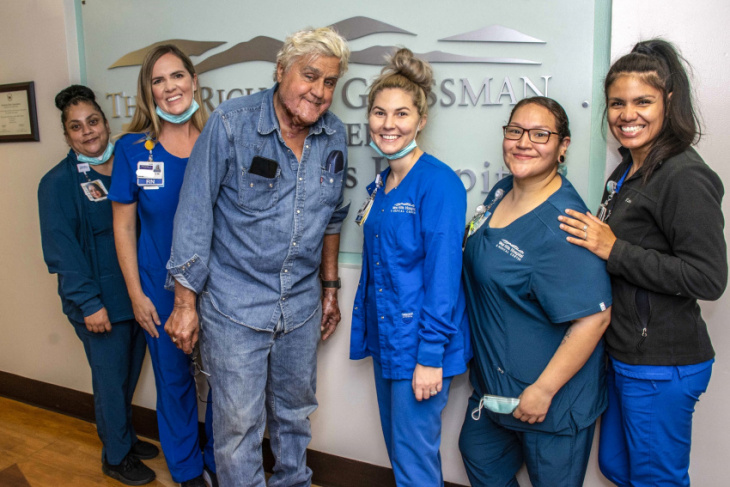 Comedian Jay Leno was released from the hospital on Monday after suffering burns to his face, according to multiple reports.

Leno stayed at the Grossman Burn Center for 10 days after he was injured when flames errupted while working on his 1907 White Steam Car on Nov. 12. While he suffered third-degree burns, he should recover. “I am pleased with Jay’s progress, and I am optimistic that he will make a full recovery,” Dr. Peter Grossman, Leno’s doctor, said in a statement released by the Burn Center.

The hospital released a photo of Leno and the staff that appeared to show him in good spirits. He had no wraps on his face, though it appears he still has some healing to do. According to an NBC News report, he will continue to receive outpatient care from the hospital.

“Jay would like to let everyone know how thankful he is for the care he received, and is very appreciative of all of the well wishes,” the hospital said in a statement. “He is looking forward to spending Thanksgiving with his family and friends and wishes everyone a wonderful holiday.”

The incident occurred when a spark ignited a fuel leak on Leno’s White Steam Car and the fuel sprayed on Leno. In addition to his face, Leno’s chest and hands were burned. A friend quickly doused the flames.

After the incident, Leno canceled several appearances. There is no word yet on when he may resume his normal schedule or return to his “Jay Leno’s Garage” TV and YouTube show.