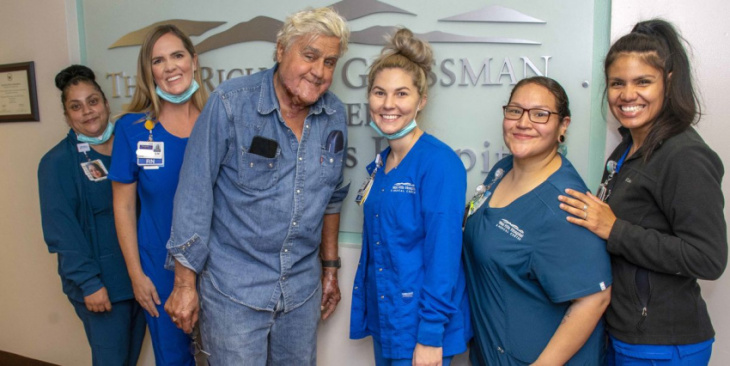 Comedian and noted gearhead Jay Leno was released from a Los Angeles hospital Monday after suffering burns due to a car fire, the hospital said in a statement.

Leno, 72, was admitted to the Grossman Burn Center in West Hills, California earlier this month after suffering burns caused by a sudden car fire at his private storage facility. The former Tonight Show host experienced “serious” injuries to his face, chest, and hands, telling Variety he needed “a week or two” to get back on his feet following the incident. He spent a total of 10 days in the hospital.

“I am pleased with Jay’s progress, and I am optimistic that he will make a full recovery,” Dr. Peter Grossman, Leno’s doctor, said in a statement released by the Burn Center.

Leno will continue to receive follow-up care for his injuries at the Grossman Outpatient Burn Clinic going forward.

The television host was working a 1907 White Model G steam car trying to unclog a fuel leak, causing some fuel to be sprayed onto the comedian’s face and hands, TMZ reports. A spark quickly ignited the fuel, causing the blaze to begin.

“Jay would like to let everyone know how thankful he is for the care he received, and is very appreciative of all of the well wishes,” the hospital said in a statement. “He is looking forward to spending Thanksgiving with his family and friends and wishes everyone a wonderful holiday.”