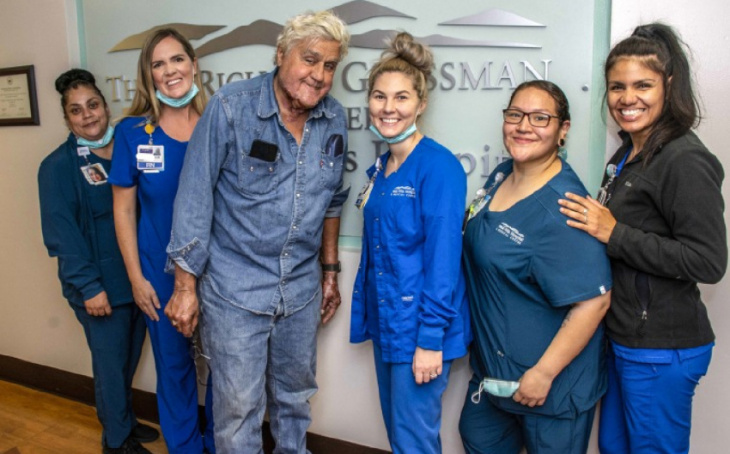 The American comedian and car collector Jay Leno has been released from a Los Angeles hospital following an incident ten days ago in which he sustained severe burns in a garage fire.

Leno, 72, was reported to have been attempting to unclog a fuel line on a 1907 White steam car when he was sprayed with petrol which ignited, causing severe burns to his face, neck and hands.

The swift actions of a friend who smothered the flames likely saved Leno’s life, it was reported, and the well-known car enthusiast was rushed to the nearby Grossman Burn Centre for treatment.

In the first photo of Leno made public since the fire, the comedian, wearing his trademark double-denim outfit, can be seen cheerfully posing with staff at the hospital, though with visible scarring on his face.

At a press conference last week, Dr Peter Grossman, a plastic surgeon and medical director of the burn centre, said that Leno had suffered burns that were second degree or bordering on more severe, with some of his facial wounds “a little bit deeper and a little more concerning” showing potential signs of progressing to third-degree burns.

Leno was treated using therapies designed to stimulate healing in which some of the burns were cleaned, shaved away and replaced with a temporary “biological skin substitute”.

Grossman said that these treatments had proven successful and that Leno was in good spirits, telling jokes, handing out biscuits to younger patients and charming staff.

“I am pleased with Jay’s progress, and I am optimistic that he will make a full recovery,” he said.

The surgeon warned Leno that although he was on the road to a full recovery, it could take more time than expected and extensive follow-up treatment in the clinic’s out-patient facility would be required.

Who is Jay Leno?

In 2014, Leno retired as host of The Tonight Show, one of the biggest late-night TV talk shows in the United States. He was replaced by Jimmy Fallon.

Since then, Leno has become better-known as a car enthusiast with a collection of around 180 cars and 160 motorcycles, all housed in a former aircraft factory in Burbank near Los Angeles and has, for some years, hosted the TV and web series Jay Leno’s Garage.

Leno has also been a regular contributor to Sunday Times Driving, reviewing the likes of the SSC Ultimate Aero, Fisker Karma, Jaguar C-X75 concept and Lexus LFA Spyder for the newspaper. He even got the world exclusive test drive of the McLaren P1 hybrid hypercar, which he wrote about and filmed for The Sunday Times. 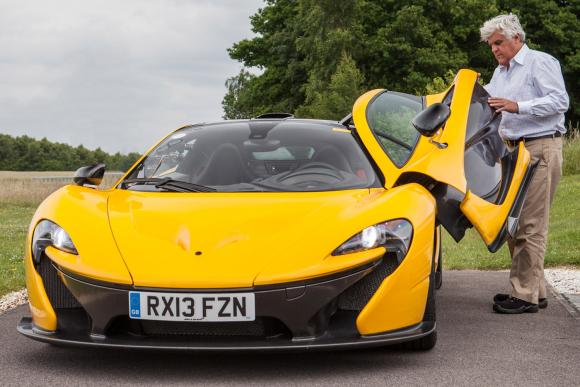 The collection also includes several steam cars including at least two vehicles built by the White Motor Company, one of which he was working on at the time of the accident.

Old-fashioned steam-powered cars often rely on petrol or kerosene to run their burners in order to generate the steam required for propulsion and can be notoriously tricky to start, as evidenced in this video of Leno’s in which he and a friend are seen trying to start one of the Whites.

White, based in Cleveland, Ohio, was known in the early 20th century as a maker of advanced, high-quality steam-powered cars and was among the first motor vehicles to be used by a sitting US president when, in 1909, William Howard Taft ordered four cars for the newly-converted White House garage.

With the dominance of the petrol-powered internal combustion engine though and as steam went into decline, White switched to building petrol-powered cars, manufacturing its last steam car in 1911.

In time, thanks to a much more successful bus and lorry division, White stopped building cars though because of its heavy vehicle arm, the company name survived for decades until it was phased-out by then-owner Volvo in the 1990s.

Although manufacturers continued to experiment with steam-powered cars throughout the 20th century, their relative complexity, expense, and the fact that they could take up to half an hour to start meant that they were already essentially dead by the 1920s.

In an automotive world dominated by the petrol-powered Ford Model T, an expanding network of filling stations and where the electric starter was becoming commonplace (also negating one of the big advantages of the battery-electric car — simplicity), but for a few oddball projects, steam was soon relegated to a footnote of history, appreciated mostly by historians and hardcore enthusiasts such as Leno.