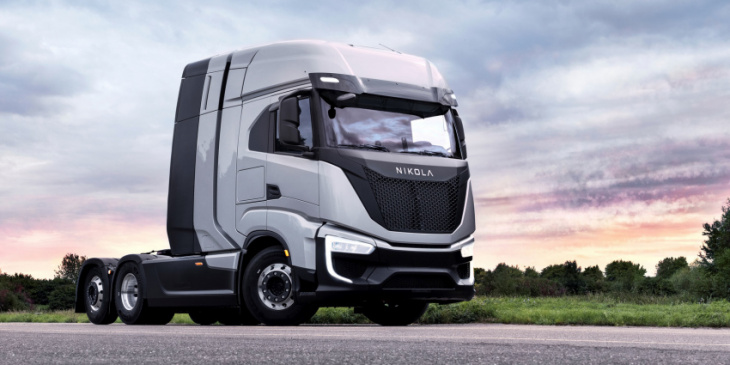 Commercial vehicle specialist Iveco and Hyundai have unveiled a prototype of the Iveco eDaily FCEV at IAA Transportation, as well as a pure battery electric eDaily. In cooperation with US zero-emission truck manufacturer Nikola, Iveco also showed the Nikola Tre BEV for the European market and the beta version of the Nikola Tre FCEV at the show.

Hyundai Motor Company and Iveco Group began cooperating on commercial vehicle technology, joint procurement and mutual supply in March this year. The two companies have since been collaborating on electric powertrains and platforms, as well as hydrogen fuel cell systems. In July, the two companies announced that Iveco will use Hyundai fuel cell systems in its future hydrogen buses for Europe. The FC systems will come from HTWO, the standalone Hyundai brand announced at the end of 2020.

Martin Zeilinger, Head of Commercial Vehicle Development Tech Unit of Hyundai Motor Company said today that: “The partnership between the two companies has proven to be very successful and we expect greater results in the coming years.” 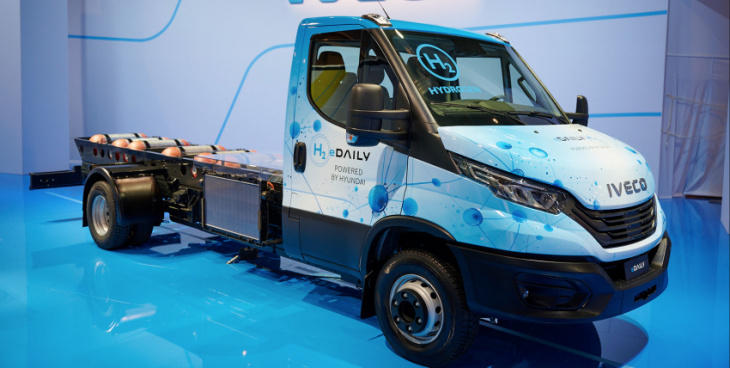 The Iveco eDaily FCEV just presented at the IAA is equipped with a 90 kW fuel cell system from Hyundai, a 140 kW e-motor and a battery pack from FPT Industrial, which is the powertrain brand of the Iveco Group. Six tanks provide a combined storage capacity of 12 kg of hydrogen. The prototype, with a gross vehicle weight of 7.2 tonnes, has been tested in Europe and offers a range of 350 km, a maximum payload of 3 tonnes and a refuelling time of 15 minutes. Iveco plans to produce a small series of FCEV vans based on this prototype for testing by selected customers by the end of next year.

Iveco does not go into detail about the eDaily BEV in its statement, but the two companies say that the eDaily BEV is best suited for short journeys, while the eDaily FCEV will be an ideal option for deliveries where long range with high payload is required, which generally marks the advantages of both drive types. Speaking at the presentation, the Iveco boss, Gerrit Marx said: It does not make sense to build exclusively with this technology or that technology, as only a smart mix of renewable fuels, battery-electric and fuel cell applications will address all applications for commercial vehicles.”

In the second major presentation from Iveco Group, the other hydrogen fuel cell partnership – with Nikola Motor, the US manufacturer of heavy-duty battery electric and hydrogen fuel cell trucks. This partnership recently announced the beginning of testing for Nikola Tre BEV trucks at the Port of Hamburg. Nikola Motor and Iveco have created two vehicles that they say are suited for missions of approximately 500 km (BEV) or 800 km (FCEV) given the vehicle’s initial configurations.

While further technical details were not revealed, Michael Lohscheller, the German manager who is President of the Nikola Corporation, said: “Specifically developed as electric vehicles, they deliver performance and a driving experience that can compete with their diesel-powered peers in the toughest heavy-duty missions. They offer operationally and financially viable zero-emission solutions for regional applications and long-distance hauling that will give customers a real, competitive advantage.” At the presentation, Nikola Motor presented driver’s testimonies from the use of the fuel cell trucks at the Port of Los Angeles in the USA, where drivers claimed the refuelling time was quicker than that of a comparable diesel truck.

In order to help commercial vehicle operators to afford upfront costs of zero- and low-emission vehicles Iveco has spun off GATE, standing for Green and Advanced Transport Ecosystem specifically for financing options. This spin-off is specialising in pay-per-use models. CEO Marx said this is the only way for the required rapid uptake of zero-emission vehicles that he says “will not happen through traditional ways of selling.”