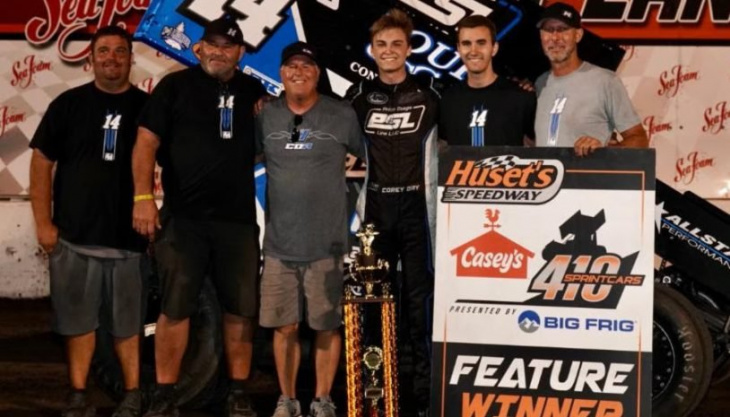 Additionally, the first track champion of the season was crowned as Jacob Hughes captured the Wyffels Hybrids RaceSaver Sprint Car Series title by only one point in a championship fight that came down to the wire.

“Oh that’s awesome,” he said. “We got it done. We’re champions. Me and dad worked our tails off for this one and I’m proud to bring that trophy back to our shop.”

Day made the most of his Huset’s Speedway debut by leading the final 10 laps of the 25-lap Casey’s 410 Sprint Cars presented by Big Frig feature to become the seventh different feature winner in the division this season.

Kaleb Johnson held the point for the first 15 laps, highlighted by a stout battle in thick traffic as the top four drivers where within a couple of seconds near the midpoint of the race. Day executed a slide job a lap after the final restart of the race.

“It started to rubber up there like a lane off the top,” he said. “I figured if I hopefully hit it better than him in one and two (I could) slide him in three and four.”

Right after Day made his move on Johnson Ryan Timms advanced into second place and closed within a couple of car lengths of Day before jumping the cushion in turns one and two in the closing laps.

“I was just trying to get as many cars as I could there,” Day said. “He’s got a few more races here than I do and he knows how it works and I really don’t. I didn’t know where he was, if he was behind me or not, so I just kept trying to put as many lapped cars behind us.”

Timms rebounded from the near incident with a wall and closed the gap to finish second by .693 seconds.

“Every time I got close to someone I’d catch their dirty air and put it in the fence,” he said. “That’s kind of what got us tonight. I felt like we were the fastest car on the track so I’m still happy with it.”

“I started in front of both of them and I felt we had a good car,” he said. “I just messed up. I never should have let Corey get by me and then I should have slid Ryan about eight or 10 laps in. We had a good run. Third is nothing to hang our heads about.”

Johnson recorded a fourth-place result and Justin Henderson rounded out the top five.

Steuerwald took the lead on Lap 11 and held on to the top spot for the final eight laps to score his track-leading third Nordstrom’s Automotive Late Model Street Stocks triumph of the season and the 20th of his career.

“There was no breathing room tonight,” he said. “The track was a little tricky. You gotta do what you gotta do to get the win. I could see J.J. start moving up a little bit and when he moved up he was skated out more and more. I started going half throttle around the corner. When he was blowing his tires loose I went half throttle.”

Ballenger led the distance of the Wyffels Hybrids RaceSaver Sprint Car Series main event, which was shortened to 15 laps after multiple red flags and cautions during the first nine laps. It marked his 30thwin at Huset’s Speedway.

“I just love this place,” he said. “They did a heck of a job when they reworked the track. We’re rolling really good right now. It was nice to get a win. Congratulations to Jacob Hughes and Lee Goos and all the competitors here this year. The 305s are obviously right there with the 410s for competition.”

Lee Goos Jr., who finished second to Hughes in the championship standings, advanced from fourth to second place with a pair of passes near the midpoint of the feature. He closed within a couple of car lengths on Ballenger, who moved up the track to Goos Jr.’s preferred higher groove in the closing laps and held on to win by 0.766 seconds.