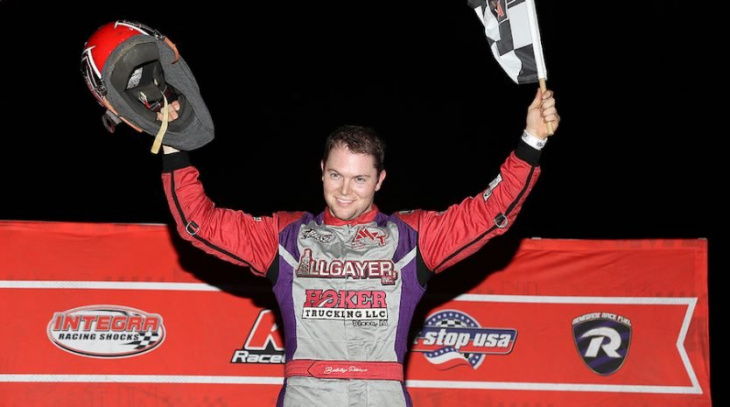 The 25-year-old Pierce, from Oakwood, Ill., wheeled his Hoker Trucking/Allgayer Inc./Rio Grande Waste Services-sponsored Chevrolet No. 32 to the victory at the banked, quarter-mile, dirt oval. 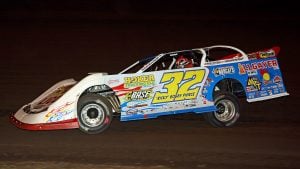 The front row of Dennis Erb Jr. and Pierce brought the rest of the field down for the green flag start with Erb and Pierce battling for the lead with Erb hugging the bottom groove and Pierce on the high side.  Pierce finally got the lead for good, getting by Erb on lap 13.

Pierce then moved to the bottom line, getting slowed by two yellow flag caution periods.  Erb, who the evening’s fastest qualifier among 42 entries, began drifting back and finished seventh.  Babb put some pressure on the leader only to lose second to Heckenast in the closing laps.  Heckenast was pressuring Pierce at the end.

“The track was very smooth.  It had a top and a bottom (groove),” said Pierce.  “We were on the top battling early on with Dennis Erb.  I got to the bottom to protect (my lead).   Then at the end, I knew they were all around swarming me.  I moved up at the end.  It was the right choice because Frankie (Heckenast) was coming there.”

It was Pierce’s 15th victory this season.  Brandon Sheppard leads the series standings after Tuesday’s program.