During Jeep‘s 4xe day, the company unveiled an off-road-ready EV named the Jeep Recon. With its chunky design, removable doors, and convertible roof, this electric 4×4 looks like a Wrangler replacement. But Jeep is pledging to sell the two SUVs side by side. In fact, the Recon’s advanced chassis may guarantee the Wrangler gets to keep its more traditional layout for years to come. 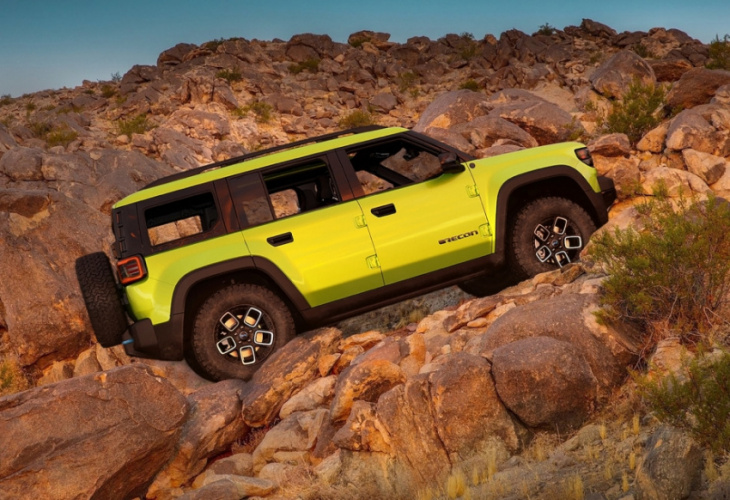 The Jeep Recon is one of Stellantis‘ first all-electric SUVs. The company revealed it at the Jeep 4xe days, alongside two other electric SUVs: the Europe-only Jeep Avenger and the Wagoneer S.

The Recon is a full battery electric vehicle; unlike Jeep’s 4xe hybrid SUV, the Recon has no internal combustion motor. But despite the Recon’s very new technology, its style is familiar. From the Recon’s five-spoke rims to seven-slat grille, most elements of its design pay tribute to Jeep SUVs of the past.

Ralph Gilles, Chief Design Officer of Stellantis, said of the Recon, “It was absolutely inspired by the Wrangler.” He even went so far as to call the two SUVs “Brothers.”

To this end, the Recon features removable doors, removable rear windows, and a roof that opens the full length of the vehicle. 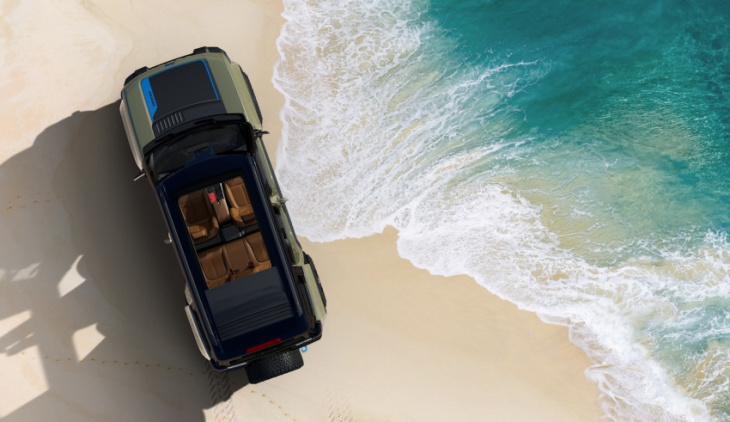 Even though the Recon is reminiscent of the Wrangler, it is not aiming to replace its big brother. Gilles added that the Wrangler is “The King of our portfolio of vehicles and will always lead the charge.”

Jeep is hustling to make 50% of its U.S. vehicle sales electric by 2030. To this end, you might see an all-electric Recon at your local Jeep dealership sooner rather than later. But this does not mean the traditional Wrangler is going away.

Will Jeep ever build a fully-electric Wrangler? 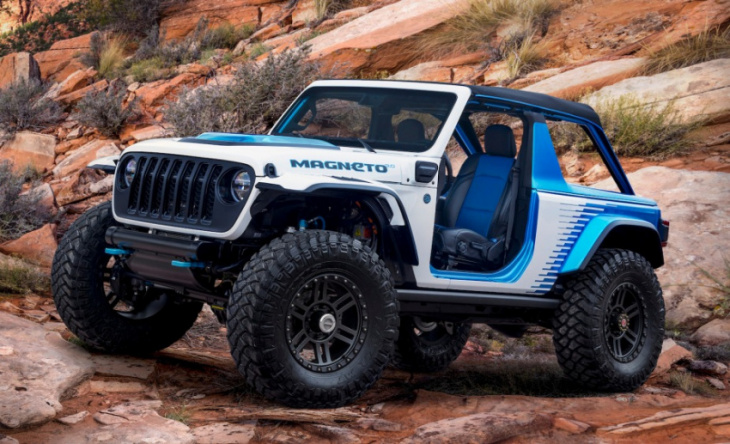 If the Jeep Wrangler continues to “lead the charge,” this 4×4 may need to transform for the electric future. Jeep has been dabbling in Wrangler EVs for years and has unveiled two generations of a fully electric concept vehicle called the Magneto.

The Magneto Wrangler has a single electric motor under the hood, batteries set above the frame rails, solid front and rear axles, and a manual transmission. That’s right, unlike most EVs the Magneto is a true, three-pedal manual. This is because its 850 lb-ft Axial Flux electric motor redlines at just 5,250 rpm.

The new Jeep Recon EV angles to fill an important market niche. Ford proved there’s a market for American unibody 4×4 SUVs with independent suspension with its Bronco Sport. With the Recon competing with the Bronco Sport, the Jeep Wrangler is free to continue being an aggressive flagship SUV.

A traditional Wrangler with an Axial Flux motor, available manual transmission, and gasoline-powered range extender would be one of the most capable 4x4s yet, and a perfect “King” of the Jeep brand.

Next, check out the latest electric Jeep Wrangler concept vehicles or see the Jeep Recon for yourself in the video below:

Keyword: Is the Jeep Recon Replacing the Wrangler?

Ram has already killed off the EcoDiesel engine option in its 1500 pickup truck for 2023, and now it looks like Jeep may be hitting the “off” button as well. Four-door Wrangler Unlimited models will continue to offer the 3.0L diesel for 2023, but rumours are that the 2024 lineup ...

Ram pulled the EcoDiesel from the 1500 lineup for 2023, the pickup losing its oil-burning option as soon as January. According to a post at the JL Wrangler Forums, the Jeep Wrangler is the next in the Stellantis family to lose the VM Motori mill, but the news has ...


View more: Is Jeep Going To Kill the Wrangler?


View more: 4 Advantages the 2023 Jeep Grand Cherokee Has Over the Nissan Murano

2023 Jeep Wrangler Unlimited 4xe: Do You Need an Everyday SUV or an Off-Road Warrior?