Inside Hilton and Moss: 'the Rolls-Royce of classic car restoration'

From restoring classic cars to selling them and storing them, Hilton & Moss can help. We visit the firm to find out more

“It’s a 1956 Mercedes Gullwing. We’re looking for someone to buy it, and we’ll work with them to restore it.” The price? A not-inconsiderable £1.7 million.

It’s hard not to recoil when such sums are casually mentioned, but it’s clear from looking around that the cars on display at the UK’s newest (and possibly most upmarket) showroom are pretty special. The building belongs to Hilton & Moss, which is part of the Hilton Group, a firm that counts the UK’s largest insurance-approved accident repair business, and Lotus and TVR specialist Castle Sportscars among its line-up.

Jack Nicholls, Hilton & Moss’s head of marketing, says the prices on the windscreens of the showroom’s fleet of classic and exotic models represent a price well worth paying, adding: “We’re the Rolls-Royce and Bentley of car restoration”. And a quick scan around his brand-new £8m facility and the cars it holds shows his claims hold water. As well as the Gullwing, the showroom counts several Mercedes 190 SLs, Jaguar XK120, an Austin Healey, Aston Martins and even a Triumph Stag among its number.

The gleaming purple Stag is of particular significance, because it’s the first car that the firm’s boss Peter Hilton ever restored. It wasn’t the first model he repaired, though. That was back in 1984 in his parent’s garage. From its base in Bishop’s Stortford, Herts, Peter’s empire has grown since then, and the latest addition, an all-new, 75,000-square- foot showroom, workshop and storage facility, is testament to the work he and his team are capable of doing.

This facility is stretched over three floors. The first two floors exhibit Hilton & Moss’s stock, plus some of Peter’s private collection – which includes that Stag, a car that holds far too much sentimental value to be offered for sale – plus a two-storey workshop. 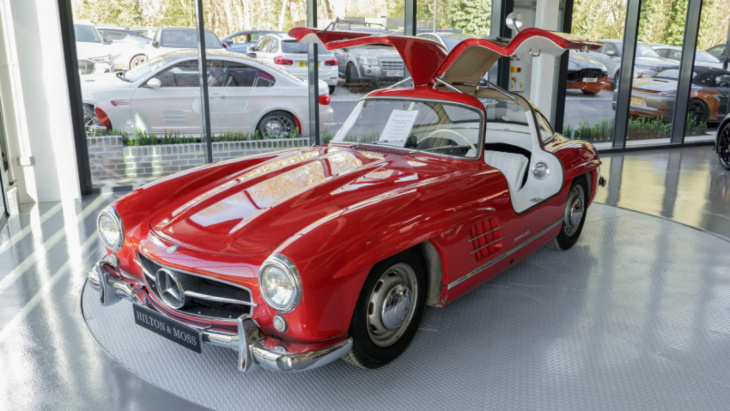 The third floor has space to store up to 300 cars, and has controlled temperature and humidity. A quick stroll around reveals the eclectic tastes of its customers. A Series 1 Lotus Esprit sits alongside a Mk1 Ford Escort. There’s a Lotus Elise, while a yellow Lancia Delta Integrale Giallo Ginestra lights up another corner. A few feet away is a partially dismantled Porsche 911, while opposite there’s a Rover P4 that looks like it’s been wheeled straight out of a barn.

Nicholls claims the business’s storage side is more like a concierge service, where owners could, in theory, call up on a Friday morning, request their car be readied for a weekend drive and return it when they’ve finished their trip. “We can delivercars to customers, or take them wherever they want them – the Mille Miglia, it’s all possible. We can collect customers from the airport if they prefer, too,” he adds.

“If there’s any damage, we can repair it. Customers come here because of the service we can deliver,” Nicholls says. The workshop team has a combined 100 years’ experience in classic-car restoration, and concours-quality paintwork is achieved using both modern water-based paint and the same kind of two-pack and cellulose finishes many of the cars would have received in period. With more than 10,000 ‘normal’ cars receiving attention after crashes every year, it’s easy to understand the obsession with flawless bodywork, yet the 30 workshop bays mean the restoration business can look after mechanical overhauls, too.

It’s that level of detail that has made Hilton & Moss-restored classics regular fixtures at some of the world’s most prestigious events. A Mercedes 190 SL owned by David Gandy recently took silverware at the London Concours. It was alongside another 190 SL owned by former Formula One driver Max Chilton, and a third once owned by Ringo Starr.

Despite the significant investment in the facility and the stunning quality of the firm’s workmanship, you might expect labour rates to run into several hundred pounds per hour. Not so, says Nicholls. “Our restoration rates are £95 per hour,” he says. “You might find an Audi dealer down the road charging £150 per hour.” Equally, storage rates aren’t hair-raising either, starting from £50 per week, although that does depend on the value of the car, and the level of service you’re looking for. At the extreme end, the company can look after and manage entire car collections.

Nicholls describes the new facility as a destination, and for the well heeled classic car enthusiast, it’s very hard to argue. As for the rest of us? Well, it’s hard not to be tempted by a better-than-new classic, isn’t it?

Keyword: Inside Hilton and Moss: 'the Rolls-Royce of classic car restoration'

Rolls-Royce Spectre tuned for comfort in the French Riviera

Rolls-Royce is testing its first all-electric car... on the French Riviera

The 1928 Rolls-Royce Phantom I Ascot Dual Cowl Sport Phaeton used in the 1974 movie adaptation of the classic F. Scott Fitzgerald novel “The Great Gatsby” is headed to auction. It’s part of Worldwide Auctioneers’ upcoming Auburn, Indiana, sale, scheduled for Sept. 1-3. The Rolls was prominently featured in ...

Rolls-Royce Cullinan gets the Carlex treatment with new Yachting Edition

Modified Polish tuning firm has turned Roll-Royce’s barge into a boat Hopefully you don’t get seasick, because Polish tuning firm Carlex Design has puts its ‘Yachting Edition’ magic touch on a Rolls-Royce Cullinan. To be fair, the Rolls off-roader is hardly a wallflower – what’s the worst you can do ...

Why a Rolls-Royce is now for the young, modern and self-driven owner

Rolls-Royce Motor Cars Chief Executive Officer, Torsten Müller-Ötvös. (Photo: Low Fai Ming) If your image of a Rolls-Royce owner is still a silver-haired gentleman or woman who is chauffeured everywhere, prepare to be shocked, for that stereotype no longer holds true. Today’s Rolls-Royce owner is much younger, less formal ...


View more: Why a Rolls-Royce is now for the young, modern and self-driven owner

The Rolls Royce Phantom has always been the ultimate luxury limousine, ever since the first release back in 1925 known as the Phantom I, they even had the Phantom VI in production from 1968 all the way up to 1990, after which it took a while for the Phantom ...

Rolls-Royce Cullinan By Carlex Design Takes Opulence To Next Level

It's inspired by the yachting culture.

Even though Rolls-Royce offers virtually endless personalization possibilities, aftermarket specialists still invest the time and effort to customize products from Goodwood. Why? Because regardless of a vehicle’s specification, the owner will get bored of it sooner or later. Another plausible scenario is when the car is changing hands as ...

SPIED: Rolls-Royce Spectre Looks Like a Normal Rolls Inside

2024 Rolls-Royce Spectre spied inside and out

Rolls-Royce Spectre Spied Inside And Out While Lapping The Nurburgring

Rolls-Royce Silver Cloud III vs Cadillac Series 62: the sky is the limit

Rolls-Royce And Hyundai Will Work Together On Air Mobility Projects

Hyundai teams up with Rolls-Royce to build this FCEV air taxi, taking off by 2028

Rolls-Royce Cullinan bumped to over 950Nm of torque

Can the Cadillac Celestiq Really Take on Rolls-Royce?

2 Crucial Features Helped a Man Get His Stolen $400,000 Rolls-Royce Back

Rolls-Royce Will Become a Fully Electric Brand by 2030, Spectre Will Go Into Production Next Year

Polestar: ‘We have a Rolls-Royce attitude to horsepower’

Rolls-Royce turns on the bespoke charm with Private Office Dubai

BMW iX M60 And Rolls-Royce Spectre Could Share The Drivetrain

Rolls-Royce Phantom With Six Wheels Begs The Question: Why?

Rolls-Royce Black Badge Line-Up To Be Showcased At Goodwood